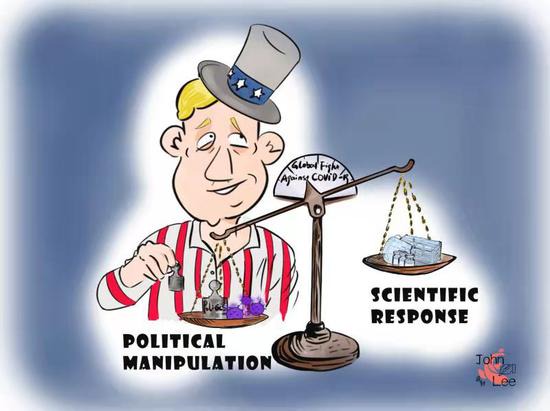 The United States intelligence community report on COVID-19 origins is "not scientifically credible", and Washington's assertion of lack of transparency on the part of China is only an excuse for politicizing and stigmatizing purpose, the Chinese embassy in the U.S. said on August 28.

A two-page summary of the report the Office of the Director of National Intelligence released on that day does not rule out either natural exposure or laboratory accident as the origins of SARS-CoV-2, but it claims that China "continues to hinder the global investigation, resist sharing information and blame other countries".

The U.S. intelligence agencies are quite experienced in making and spreading disinformation. It  cooked up the conspiracy theory that the novel coronavirus leaked from a Wuhan lab, which was soon debunked by the global science community; it then repeatedly hyped up the “lab leak” theory in disregard of the scientific conclusions in the WHO-China joint report on COVID-19 origins; more surprisingly, U.S. President openly ordered intelligence community to probe into the origins of the COVID-19, and asked for a report based on analysis of “information that could bring us closer to a definitive conclusion” in 90 days.

Continuously hyping the “origins-tracing investigations”, the U.S. side doesn’t care about facts and truth, but tries hard to exhaust China’s diplomatic resources, increase U.S. leverage toward China and hedge against China’s influence. Such malicious intentions of the country have become all too clear.

The despicable misdeeds of the U.S. side, while revealing the country’s disrespect for scientific spirit, have disrupted global anti-epidemic cooperation. They are “accomplices” of the pandemic and more dangerous “political viruses”.

The so-called report on the origins of the COVID-19 pandemic compiled by U.S. intelligence agencies was aimed at covering up the truth about the failure of the U.S. to control the pandemic and shifting the blame for the incompetence of U.S. government to China.

In the report, the U.S. continued to confuse the public by falsely accusing China of hindering global investigation, lacking transparency, and refusing to share information. Such groundless accusations are merely poorly fabricated excuses for its failed investigation into the roots of the COVID-19.

Since the highly-anticipated report failed to serve its intention of pursuing presumption of guilt against China, the White House claimed that it would “continue working with like-minded partners around the world” to press China.

China has always taken a scientific, professional, serious, and responsible attitude towards in

tracing the origins of the COVID-19.

It is the first country in the world that has carried out cooperation with the WHO on global COVID-19 origin tracing. It has twice invited WHO experts to China for origin tracing, and was completely open and transparent when the experts were in China. They visited every site on their list, met every individual they asked for, and were provided with all the data they wanted.

In contrast, the U.S. has not only reported the highest number of COVID-19 infections and death toll in the world, but caused the most serious cross-border spread of the virus. The time of the first cases of COVID-19 in the U.S. has been continuously proven earlier than previously reported. The connection between the country’s biological labs of Fort Detrick and University of North Carolina and the COVID-19 is highly suspicious.

The international community strongly urges the U.S. side to show an open and transparent attitude towards concerns over these labs and provide detailed information about them. However, the U.S. has not only avoided questions and remained secretive about them, but constantly set up barriers to prevent the world from getting more information.

The U.S. has confused right and wrong, arbitrarily sought presumption of guilt, and openly played double standards on COVID-19 origin tracing, continuously pursued politicization and stigmatization against China amid the pandemic, and used the COVID-19 origin tracing as a tool to serve its own interest. Such self-deceiving tricks make the country both pathetic and ridiculous.

Although the WHO-China joint report stated that the introduction of COVID-19 through a laboratory accident is “extremely unlikely”, the U.S., driven by its tendency to look for a scapegoat for its incompetence in handling the pandemic, has insisted that the two hypotheses, natural exposure or laboratory accident, are both plausible.

Americans always associate epidemics with foreign immigrants, and use them as convenient scapegoats, pointed out a U.S. scholar, adding that blaming others for one’s own mistakes is always easier than looking into the mirror or examining the broken heart.

Instead of focusing its energy on fighting the COVID-19 at home, the U.S. has just continuously played the blame game and resorted to political manipulation, which could only lead the country to failure of pandemic response and worse cross-border spread of the virus.

If the U.S. truly cares about the COVID-19 origin tracing and wants to play the role of a responsible country, it should not splash dirty water onto other countries, but show its sincerity by earnestly taking effective measures to control the pandemic and inviting the WHO over for investigation into the origins of the pandemic. By doing so, the country can help mankind defeat the pandemic at an early date and better respond to future public health emergencies.

An old Chinese saying goes “A just cause enjoys abundant support while an unjust cause finds little.” Today, the COVID-19 pandemic is still raging across the world. The horrible virus has so far infected more than 200 million people and caused over 4.4 million deaths globally.

It’s the expectation of international community, and will also serve the interests of the American people.

If the U.S. failed to meet these expectations and pushed its political manipulation farce too far to be stopped, it would find itself end up becoming a laughing stock in the world stage.