This semi- biography of ELK GROVE is written for the generality of opera news readers in order to strengthening their faiths in wonder of God as He ca do Whatever He Likes.

Elk who was born in 1992 has a rare blessing as the only human being in the history of the world who could see without eyes using clicking’ or echolocation to see.

Ben, the miraculous boy was only two years old when he lost his eyes to cancer that he has been battling with for a long time, but he had a unique way of seeing the world. He, if he did not lose the two eyes would have being more legend than this as he was using clicking or echolocation, much the same way dolphins communicate to people as you can see in the attached video. Ben could tell the distance between something by mere clicking or feeling. His Clicking Ability would tell Ben how far or close an object was.

Traditionally, there is no farce saying in the popular Africa proverb that there is nothing that are not transferable as Ben’s story began not with his struggle, but with his mother Aqua Gordon whose her turbulent life needs to be paged for whoever that wants to commit suicide .

Ben’s Mother, Aqua grew up very poor. She seemed naturally clothed with struggles as from her only husband became addicted to homeless and later became a single mom with five children, all who were taken away. When she got them back, Aqua was on welfare, at times working two jobs to stay afloat.

As the Almighty does, He gave her a bad body car with a good engine as while many would collapse under the weight of caring for a blind child, Aqua thrived as she was used to it so did Ben who was given a rare gift to see without eyes.

It wasn’t unusual to see Ben riding his bike to school, roller balding – doing what seeing kids took for granted as you can see in the video as God performs wonder as He likes.

Aqua was reported to have said that she didn’t expect him not to be a kid as she wanted him to enjoy life and enjoy his childhood as much as he possibly could.

She even said Ben’s blindness blessed him in some ways, giving him vision beyond sight.

Ben was like a Prophet as he went on to speak around the world, sharing his outlook and his clicking and the ability in disability to the world. Just when it seemed things were looking up for him, Ben’s cancer returned and the family faced yet another battle. What are you facing that is more than what Ben faced that you think you could commit suicide. Life is a coins that no one can say the face that it will turn up to see you. Your issue may be a way to your success.

Ben was reported to have died at age of 17 in 2009. He was buried on what would have been his 17th birthday. In her grief, Aqua was able to celebrate his life. More than 2,000 people bid farewell, including close friend Stevie Wonder.

Can you try to be blind for a day not to talk of 16 years! 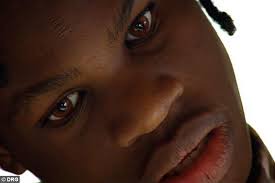 Content created and supplied by: Suljurist123 (via Opera News )