God Is Not Against Plastic Surgery, Not Entirely (The Evolution Of Creation)

God Is Not against Plastic Surgery. God makes no mistakes, but it's safe to blame human deformities on the fact they the first man left the garden. I mean if we blame the first man and his partner, Eve, for all the sins in the world and the chaos, we may as well pin the fact that some humans are born deformed on them.

Perhaps the reason some people are born with deformities is that the devil is involved. You can choose to believe this but you could also consider, that creation stopped when God created Adam.

After God created Adam, he created Eve from his rib. These two were the only ones to be created by God in a manner that I will call "Manually." Every other human being that has existed after Adam and Eve has been as a result of a process. I have always believed that God deposited tremendous powers in this world, enough to have the world function on it's on and as I have previously established in some of my old articles- the world is like a computer and God is the one giving commands on how the computer functions.

So technically, after God had created Adam and Eve, he had no need whatsoever to start creating people one by one, every day for thousands of years. All he had to do is give the command to the already created humans, to multiply. Although I do believe for each individual, there is a soul and that soul is called out through the power of God and then there is a spirit which stands for the breath of life, also passed down through Adam but from God.

If we now understand that God has not created any human being since he created Adam and Eve, then we cannot really blame God for deformities in mankind. So if a person is born deformed, perhaps with a nose or mouth that doesn't look good, we should blame the computer (nature) because obviously, there has been a glitch in its system and its ability to follow commands. The glitch in the universe is exactly what causes deformities in human beings. That error in the code of nature due to what science calls "mutation." So when these patterns begin to exist in humanity and mutation causes a baby's nose to move from it's original state to a strange-looking position, should we simply sit and wait or should we move on to go seek help from those who God has blessed with the knowledge to fix these things?

We have often condemned plastic surgery, as believers, we have often condemned those who seek out help from certified doctors but we don't put ourselves in their shoes, we don't try to understand what it must feel like to look in the mirror and see a deformed hand or a deformed face. It's even tougher when they have the ability to find a cure or a solution but they cannot have it because their beliefs go against it. However, I think it is cruel to have men and women live with deformities when there is a solution.

There is a difference between feeling a need to be more and feeling a need to belong. Those who are genuinely born with deformities should be allowed to seek help from plastic surgeons. This is not me saying that people who want a smaller nose should keep going to get surgeries done, neither is it me saying people should visit a plastic surgeon often. What I am saying is that for those who are born with deformities, they should be able to get these things fixed without having to be judged by the public. 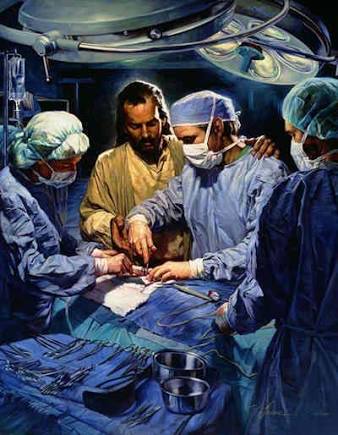 The Bible says all power in heaven and on earth belongs to God, so does all knowledge, and all abilities to heal and to cure. So the knowledge given to doctors to find solutions and help those who are deformed should also be from God. So why do we intentionally ignore the knowledge God has blessed us with. Why do we constantly see the knowledge as devilish?

Although I must add that some have turned their visit to plastic surgeons as a monthly thing, they have become addicted to the idea of being perfect. These people are very different from those who have suffered from deformities for a long time. It is not God who is against plastic surgery, it is we men who have attached morality and cultural ideas into everything.

God has never been against seeking knowledge, neither has he ever been against looking for help or helping people with the knowledge he has given. If nature gives you an error code(mutation), the computer has a lot of applications (humans) with access to different sources of search engines (knowledge) to help you clear that error code (deformity).

Whether or not plastic surgery is a sin depends greatly upon the type of surgery, and more importantly, the spirit behind it. Is a woman enhancing the size of her breasts so she can be attractive to other men? Or getting botox so she can look younger than her friends and attract more compliments? If so, this is sin, for the Bible says:

Do nothing from selfish ambition or conceit but in humility count others more significant than yourselves. Let each of you look not only to his own interests but also to the interests of others.

Adam Eve The Evolution Of Creation