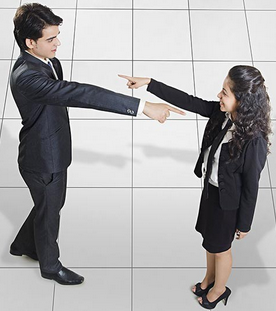 A Danish research says one can nag ones spouse to death. Nearly 10,000 people from their mid-30s to early 50s were involved in the study for 11 years. They discover that for both men and women, living in a near-constant state of conflict with their spouse, the likelihood of early death is twice as likely to die to occur, with a slightly larger effect for men. A public health researcher of the University of Copenhagen affirmed that around 315 extra deaths per 100,000 people per year is caused by nagging. But for man, the risk of dying early was even higher when dealing with "many" demands or worries from a spouse – nearly twice as high as women, the study found. Men who had constant demands and worries placed on them by their partners were two and a half times more likely to die within 10 years than those with less stressful relationships, the study of almost 10,000 people found

Nagging can be defined as constantly harassing someone to do something especially when the person see no reason why they should do it. It means to scold, complain, or find fault constantly and be a constant source of anxiety or annoyance to someone.

Among couples, nagging is a frequent and irritating complaint of the parties involved in the marriage. It entails consistently making a big deal out of an issue consider by one of the parties as insignificant. Often it is a cycle of behavior that starts if one party feels that nagging is the only way to get what he or she wants or get a message across. Nagging is generally associated with women but men do nag too.

If your wife's or your husband is nagging, it may be because of the fact that she is being ignored or deprived of her rights. For example, every woman needs attention from her man and every man does too. Whenever a woman expects you to do what is your duty in a relationship, and you don’t do it, despite repeated requests, it will definitely makes her nag. Women mostly nag in other to get to you after trying some other means of communication. A psychologist revealed that nagging could lead to a breakdown in relationship, cause a lot of fight, and stir up many emotional and health problems. This is the reason why other means of resolution must be towed instead of nagging. There is always a way out. Unresolved nagging make the couples involved to disdain each other, and become wary of seeing each other. Instead of being happy and looking forward to spending time together, they naturally begin to avoid each other using many excusesn understanding an and in many cases, infidelity comes in when the other partner meet an understanding and a caring listener. The natural thing that follows is for both parties to begin to start questioning if it is necessary for them to continue the relationship and many issues may result if it is not checked.

If they feel that they have to give in to a particular request, which the other party is trying to force down their throat, they may put up resistance , which snowball into other areas of the relationship. Control make the other partner to feel rejected because it give them the impression that they're not ok, and are not accepted just as they are. When they feel that they are rejected the way they are, and must concur to the demand of the other party in other for them to be accepted, conflict result.

Another complication of nagging is that many women find it difficult to directly communicate their needs, and as such keep whining and nagging about what they are not getting, rather than directly stating what they want or expect from their partner. Unconsciously, they tend to focus of such partners mistakes and not his good side. Unfortunately, men by nature do not generally read the exact meaning into whining and nagging because they are not as emotional as women. The more her man starves her of what she wants, the more she nags and the less likely he is to be responsive to her wishes. This cycle then continue.

If your partner believes he or she has to do things differently in order to be accepted and loved, he or she might start to retaliate by withdrawing, getting angry, or becoming resentful. One naked truth about nagging is that it is not an effective means of handling things. It rarely gets "the nagger" what he or she really wants but it rather complicate matters .If one happen to be on the receiving end when a partner is nagging, the receiver will feel like he or she is being controlled and asked to submit to someone else's dictates. Nagging is a form of control where you keep at someone, trying to get them to do what you want them to do.

Someone said that nagging make the "nagger" to feel like a parent instead of a partner and when it is constant the partner feel like an infant, as if they're a nothing but a bundle of disappointment to their partner. The person nagging wrongfully and often unconsciously occupy an authoritarian position and naturally the sense of partnership with the other person is lost. Nagging is a passion killer. It naturally terminate trust, respect and choke sex drive to death. No one want to turn around and hug or have sex with the person that's been nagging them.

The funny thing is that most naggers don't know they nag. They believe they are offering the solution that the other party is rejecting. Nagging has never helped and it will never help solve marital conflict.

How to handle nagging in a relationship

The first thing to do is for both parties to sincerely examine themselves. It takes two, for nagging to be birth in a relationship. If conflicts and worries are everyday events, the ideal thing to do is to speedily seek out help . The next thing is for them to sincerely acknowledge the fact that there is an issue at hand and they need to deal with it mutually. In nagging moments, they are to stay calm and respectful and, if necessary, disengage from the principal issue at hand for a moment. One solution that some men utilize is to get away from a nagging partner that is stressing them by going to work or shifting their attention to busy schedules. If you find yourself in a relationship where a man is spending more time working than with you, it might be because he find his stressful work to a break from the stress generated by nagging. Its better to try and focus more on the positive side of the other person than their mistakes.

Communication that is sincere and open is needed to get all the matter into the open . Mutually, solutions should be arrived at.

Both parties must learn to let -it-go. There are some matters that are best left dead, or for that moment, it can be put aside. In a situation where both parties discover that they seem not to be obtaining result, a counsellor need to come in and offer help and in some cases, a psychologist may need to step in.

I believe in the power of prayer and the pathway of an effective fervent prayer need to be towed in moments like this.

If all these are exploited and there seem to be no solution, both parties owed it to themselves to sincerely consider the relationship.

What's your view on this? Are you in a nagging relationship, and you have a way of managing the situation or you have actually solve the challenge? Lets learn from you. Your opinion count. Kindly follow and like this page. Endeavor to share with others. Thanks.