By Harkandemic91 (self media writer) | 2 years ago A nightmare is a disturbing dream associated with negative feelings, such as anxiety or fear that awakens you. Nightmares are common in children, but can happen at any age, and occasional nightmares usually are nothing to worry about.

Nightmares may begin in children between 3 and 6 years old and tend to decrease after the age of 10. During the teen and young adult years, girls appear to have nightmares more often than boys do. Some people have them as adults or throughout their lives.

You're more likely to have a nightmare in the second half of your night. Nightmares may occur rarely or more frequently, even several times a night. Episodes are generally brief, but they cause you to awaken, and returning to sleep can be difficult.

A nightmare may involve these features:

• Your dream seems vivid and real and is very upsetting, often becoming more disturbing as the dream unfolds

• Your dream storyline is usually related to threats to safety or survival, but it can have other disturbing themes

• Your dream awakens you

• You feel scared, anxious, angry, sad or disgusted as a result of your dream

• You feel sweaty or have a pounding heartbeat while in bed

Nightmares are only considered a disorder if you experience:

• Major distress or impairment during the day, such as anxiety or persistent fear, or bedtime anxiety about having another nightmare

• Problems with concentration or memory, or you can't stop thinking about images from your dreams

• Problems functioning at work or school or in social situations

• Behavior problems related to bedtime or fear of the dark

Having a child with nightmare disorder can cause significant sleep disturbance and distress for parents or caregivers.

When to see a doctor

Occasional nightmares aren't usually a cause for concern. If your child has nightmares, you can simply mention them at a routine well-child exam. However, consult your doctor if nightmares:

• Occur frequently and persist over time

• Cause fear of going to sleep 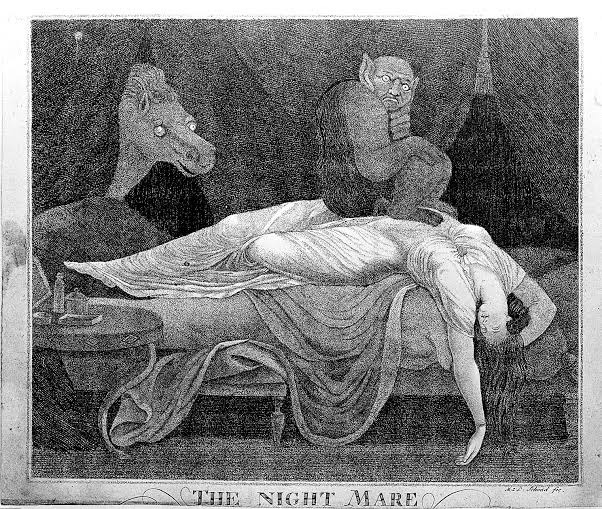 Nightmare disorder is referred to by doctors as a parasomnia — a type of sleep disorder that involves undesirable experiences that occur while you're falling asleep, during sleep or when you're waking up. Nightmares usually occur during the stage of sleep known as rapid eye movement (REM). The exact cause of nightmares is not known.

Nightmares can be triggered by many factors, including:

• Stress or anxiety. Sometimes the ordinary stresses of daily life, such as a problem at home or school, trigger nightmares. A major change, such as a move or the death of a loved one, can have the same effect. Experiencing anxiety is associated with a greater risk of nightmares.

• Sleep deprivation. Changes in your schedule that cause irregular sleeping and waking times or that interrupt or reduce the amount of sleep can increase your risk of having nightmares. Insomnia is associated with an increased risk of nightmares.

• Substance abuse. Alcohol and recreational drug use or withdrawal can trigger nightmares.

• Other disorders. Depression and other mental health disorders may be linked to nightmares. Nightmares can happen along with some medical conditions, such as heart disease or cancer. Having other sleep disorders that interfere with adequate sleep can be associated with having nightmares.

• Scary books and movies. For some people, reading scary books or watching frightening movies, especially before bed, can be associated with nightmares.

Nightmares are more common when family members have a history of nightmares or other sleep parasomnias, such as talking during sleep.

Nightmare disorder may cause:

• Excessive daytime sleepiness, which can lead to difficulties at school or work, or problems with everyday tasks, such as driving and concentrating

• Problems with mood, such as depression or anxiety from dreams that continue to bother you 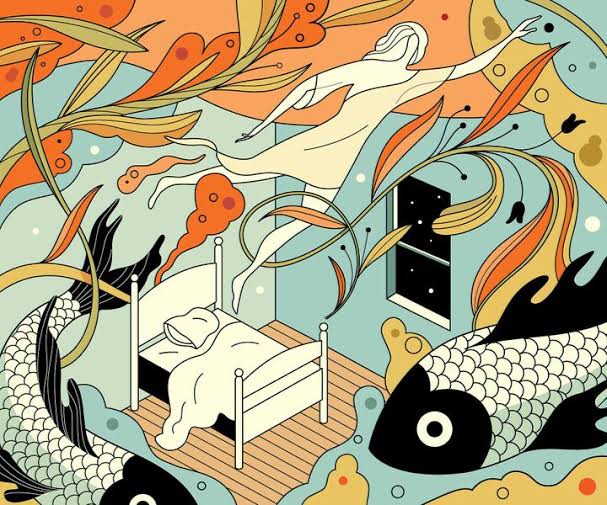 Treatment for nightmares isn't usually necessary. However, treatment may be needed if the nightmares are causing you distress or sleep disturbance and interfering with your daytime functioning.

The cause of the nightmare disorder helps determine treatment. Treatment options may include:

• Medical treatment. If the nightmares are associated with an underlying medical condition, treatment is aimed at the underlying problem.

• Medication. Medication is rarely used to treat nightmares. However, medication may be recommended for severe nightmares associated with PTSD.

If nightmares are a problem for you or your child, try these strategies:

• Establish a regular, relaxing routine before bedtime. A consistent bedtime routine is important. Do quiet, calming activities — such as reading books, doing puzzles or soaking in a warm bath — before bed. Meditation, deep breathing or relaxation exercises may help, too. Also, make the bedroom comfortable and quiet for sleep.

• Offer reassurances. If your child is struggling with nightmares, be patient, calm and reassuring. After your child awakens from a nightmare, respond quickly and soothe your child at the bedside. This may prevent future nightmares.

• Talk about the dream. Ask your child to describe the nightmare. What happened? Who was in the dream? What made it scary? Then remind your child that nightmares aren't real and can't hurt you.

• Rewrite the ending. Imagine a happy ending for the nightmare. For your child, you may encourage him or her to draw a picture of the nightmare, "talk" to the characters in the nightmare or write about the nightmare in a journal. Sometimes a little creativity can help.

• Put stress in its place. If stress or anxiety is an issue, talk about it. Practice some simple stress-relief activities, such as deep breathing or relaxation. A mental health professional can help, if needed.

• Provide comfort measures. Your child might feel more secure if he or she sleeps with a favorite stuffed animal, blanket or other comfort object. Leave your child's door open at night so that he or she won't feel alone. Leave your door open, too, in case your child needs comfort during the night.