How this Obese Man Transformed his Body into 200 Pounds of Muscle is very Amazing.

Beau Jacobson from Colleyville, Texas, once shed 65 pounds quickly in high school out of his embarrassment at his excessive weight, only to develop a binge-eating disorder later on. He finally overcame his issues with food and gained the confidence to sing in public and enter fitness competitions at the very healthy weight of 200 pounds. Beau stands at 6’3″, and when he was in high school, he weighed an extreme 285 pounds. One day in junior year, he saw a video of himself performing at a jazz show and was astounded to realize what he looked like. He vowed to himself that he would lose weight, and he achieved that quickly when he lost around 65 pounds before his graduation.

In college, however, the former football player dreaded gaining all the weight back, so he developed an extremely unhealthy habit where he would starve himself during the week, only to binge on junk food the whole weekend long.

In an interview,Beau said, “People told me all the time, ‘You look thin,’ and they didn’t mean it in a good way. They were concerned.”

He hadn’t always been overweight, but he began to develop an unhealthy, emotional attachment to food at 11 years old when his mom and dad divorced and got married to other people. It was also around the same time when he transferred to another school.

The pressures of dealing with unfamiliar environments both at home and in school led to him becoming emotionally attached to food. He began turning to food for comfort and not just for sustenance. At every meal, he would gorge on Little Debbie cakes, Lunchables meals, Oreos, Lean Pockets, and McDonald’s. 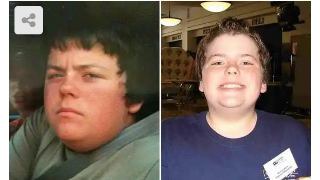 Beau carried those unhealthy habits of gorging on junk food to high school, where he sang in the choir and played football. Being a football player also further encouraged his overeating.

He said of his football life, “I loved football. I loved playing offensive line, and to play on the line, you have to be big. So weighing 280 pounds was viewed as acceptable because I was just ‘football big.'”

It was only in eleventh grade when he finally realized that his excessive weight was an issue when he saw a video of himself performing at a show. It was then that he swore to himself that he would do everything to lose weight right after the end of football season.

Beau started exercising; he did weight training and started playing pickup basketball for cardio. But the biggest change he did was his diet, and because of it, he lost 45 pounds in just three months. In the weeks leading up to his high school graduation, he lost another 20 pounds.

Beau then started college at Texas Tech University, where he joined Sigma Phi Epsilon, achieved high grades, and continued working out. But one day, he looked at a picture of himself online and suddenly thought to himself that he looked terrible. The dread of gaining back all the weight that he had lost began to hound him.

This started an unhealthy binge-eating cycle where he would extremely limit his diet during the weekdays, only to consume seemingly endless amounts of junk food during weekends.

“Over the next year, I started running three miles a day, hitting the weight room and consuming less than 1,000 calories per day, Monday through Friday. Then on the weekends, I would eat about 4,000 calories each day. Still, I was dropping weight,” he explained in the interview.

Beau’s father grew concerned over the habits of his son and advised him to go see a personal trainer. He took his father’s advice and started working out with Justin Blevins, who was a trainer at the Hero Training Center. It was then that Beau finally opened his mind to the truth that his relationship with food and exercise was messed up.

“I started eating seven meals a day, weight-trained like crazy, and most importantly, stopped binge-eating.” 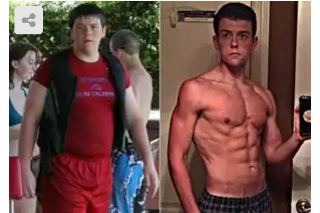 Now, Beau has finally overcome his binge-eating disorder. He now weighs a very healthy 200 pounds, but in the effort to maintain his healthy and fit body and to ensure that he doesn’t stray into the old lifestyle, he makes an effort to cook his own meals. Every Sunday, he goes grocery shopping and spends the afternoon cooking his meals for the rest of the week. This way, he limits himself only to food that he knows is well-prepared and is healthy for him.

“If a meal is already prepared, it takes away any temptation to order a pizza or pick up Chinese takeout,” he explained.

Beau also makes it a point to get up early every day to work out so as to start off his day on an energetic note. He also keeps himself inspired by writing motivational quotes on his mirror. He is also currently training to compete in the Men’s Physique division of the National Physique Committee, so his diet is more restricted than normal. During his training, his eating routine for a whole day consists of five meals—one with six ounces of lean protein, one with six ounces of fattier protein, another meal as an omelet, and the remaining two meals being protein shakes. He also includes sweet potatoes, green vegetables, fruit, and oatmeal in his diet.

He does indulge once in a while, but Beau prefers to refer to his occasional indulgences as “rewards” rather than “cheat meals.” It was something that he had learned from his workout sessions.

“I would be lying if I said that they never make me feel guilty, but I’m still working to overcome every aspect of my mental struggle from my eating disorder,” he noted.

Now, after having overcome his eating disorder, Beau relates that he has developed more self-confidence in his appearance. He has also noticed that he has a lot more energy these days, all the better to continue to engage in the things he likes doing. One of those things happens to be singing in front of huge crowds of people, something that the average person would normally dread.

“Over time I have gained more confidence,” Beau Jacobson said. “I sing gigs around town and now I’m not even afraid to step up in front of a large crowd and sing.”

In 2019, Beau auditioned for American Idol, the famous TV contest for aspiring singers. Although his attempt was unsuccessful, he released his album In Other Words on iTunes a year later.