The sure way to stop bad habit in 3 easy steps

By Des_Rose (self meida writer) | 5 months

Bad habit can cost us a lot of previous things. It can be dangerous to those around us too if not stopped. Such habit like poor anger management can cause one to harm loved ones or excessive gambling can lead to dept and loss in finance.

Habits are actions that we do repeatedly and automatically, usually without being aware/conscious of.

Miriam was a 24 years old graduate. For most of her life, Miriam had bitten her nails, she bit them until she bled. She would bite her nails till her nails pulled from her skin. Her finger tips where covered with scabs.

The nail biting habit had damaged her social life. Miriam was often embarrassed in front of her friends and always hid her nails in her pocket. When she went out on dates, she would not be able to concentrate on her date because she was always afraid she would start biting her nails again, she would ball her fingers into a fist to prevent this.

She tried painting her nails with foul tasting polish and promise to quit but she did not have the will power to quit.

Miriam was stuck in a bad habit she wanted to stop badly but she could not. To stop bad habit, you must first discover how they start/occur.

How habits are formed.

Many of the things we do each day may feel like we decided to do them consciously, but they are actually habits. Things like brushing your teeth in the morning, preparing breakfast etc.

Scientist say our brain is consistently looking for ways to save effort so it can carry out more activities easily. Our brain form habit to make it easy for us to make decisions easily.

The 3 ways habits are formed are:

1 ) Cue - This is the trigger that tells the brain to go into automatic habit/ action.

2 ) Routine - These are the acts, the action we carry out. It can be mental or physical.

3 ) Reward - The satisfaction we feel afterwards.

How to break bad habits and replace it with good ones.

You need to be able to know what trigger any particular habit. Use a note pad and for a week record the time and activity just before you had the urge to go into your habit. Write it in a tabular manner.

In the story above, Miriam was able to discover what trigger her nail biting habit using this method her therapist recommended for her. By writing down the time and activity when she felt the urge ( It was a tension in her nails) she found out that whenever she was bored or needed a distraction, she began biting her nails.

Take a self inventory of your self. Figure out all the things that make you carry out your bad habit.

Admitting the bad thing to some one else is a good way to figure out when everything spills out of control.

Change the routine ( identify the loop hole ) : The routine is the habit itself. To counter this, you need to carry out 'competing response' . In the case of Miriam, after she found out that boredom was the reason she bit her nails her therapist thought her competing response.

Rewards : Rewards are powerful because they satisfy craving. The reward is the main reason for the habit we perform. 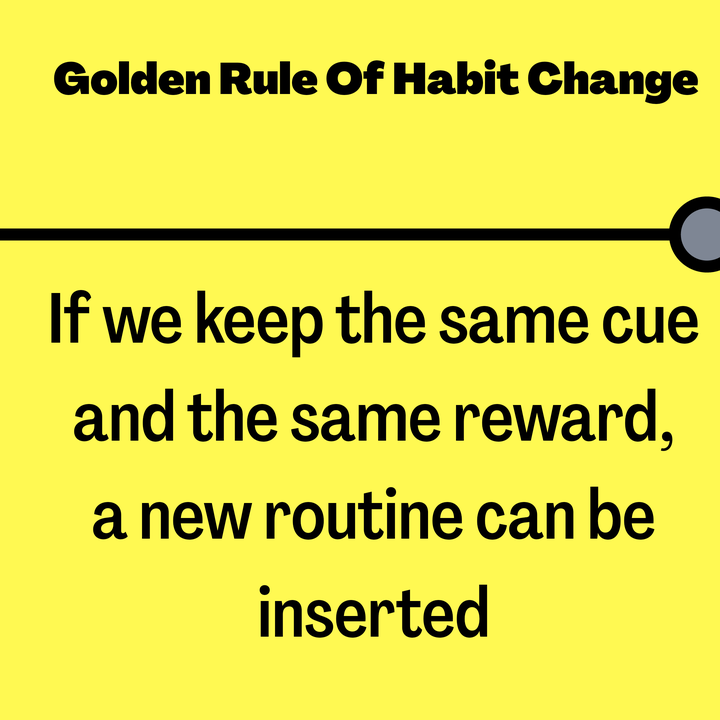 To figure out which cravings are driving a particular habit, it's useful to experiment with different rewards. This may take a few days or weeks.

When trying to replace old habit, you must find a routine that satisfy the craving.

FOR A HABIT TO CHANGE, YOU MUST BELIEVE THAT IT IS POSSIBLE. AND MOST OFTEN THOSE BELIEF EMERGE WITH THE HELP OF A GROUP.

If you have a bad habit of eating junk food, say late at night you can use the three steps.

CUE: Whenever you feel like eating junk food write in your jotter how you feel, the time, even where you where( location ). NOTE: You should have a separate jotter for this.

ROUTINE: Now get up and walk around first. Return to your previous position and check if you still have the craving.

When you return to your previous position if you still feel like eating junk food, eat a healthy snack e.g apple, carrot etc.

Check if you still have the craving. Try different things. You can also try distracting yourself with physical activity.

REWARD: If after trying any of this and the craving disappears write it down and use that routine. There may be times you will fall back to old habit but don't give up.

Look for a group of people who are trying to stop junk food and probably loose weight ( you can find such groups on social media or in your locality ) join them and participate actively.

Also, believe is important. Believe you can do it and you will.

This is applicable to different bad habit. Seek help, having people who have broken bad habit helps a lot. Read books on this. Recommendation ' The power of Habit ' Charles Duhiggs.

N/B. Stay away from people or places that are likely to pull you back into old habits.

Tell us how you where able to break bad habits.

Who or what was your motivation?

Content created and supplied by: Des_Rose (via Opera News )