I have come to realize that in our world, "impossibility" isn't welcomed, this is the case of these twins who share the same brain and can hear each other's thoughts and even see through each other's eyes. Are these twins not awesome? God is great. The twins whose names are krista and Tatiana say they know one another’s thoughts without having to speak. “Talking in our heads” is how they describe it.

Inseparable BC's Hogan twins, featured in the documentary, are unique in the world. Joined at the head, the girls have a conjoined thalamus, the part of the brain that sends physical sensations and motor functions to the cerebral cortex, allowing them to hear each other's thoughts and see through each other's eyes.. Still, they are like other Canadian twelve-year-olds, they attend school, have a favourite pet and are part of a large, loving family determined to live each day to the fullest. Craniopagus twins, joined at the head, are a rarity — one in 2.5 million. The vast majority do not survive 24 hours. Krista and Tatiana Hogan were born October 25, 2006, in Vancouver, B.C. A CT scan of the twins showed they could never be separated due to the risk of serious injury or death. 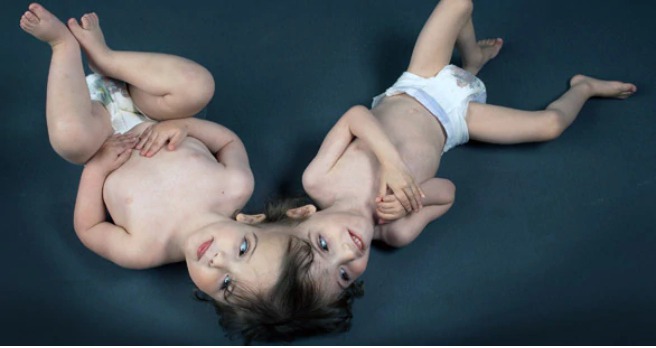 But it wasn't until their proud mum Felicia Simms saw them playing that she discovered that they could see through each other's eyes.

She said: 'When they are playing, one of the girls will reach over and grab something from her sister's side and know exactly where it is without possibly being able to see it.

'It's absolutely awesome to watch them sometimes because there's no way she can see the toy she is reaching for and it's just incredible.' The girls also seem to experience each other's emotions.

'If one of the girls is hurt, the other can feel it and if you discipline one the other will also cry. Krista and Tatiana Hogan share the senses of touch and taste and even control one another’s limbs. Tatiana can see out of both of Krista’s eyes, while Krista can only see out of one of Tatiana’s.

The structure of the twins’ brains makes them unique in the world. Their brains are connected by a thalamic bridge, connecting the thalamus of one with that of the other. The thalamus acts like a switchboard relaying sensory and motor signals and regulating consciousness.

The girls, from Vernon, British Columbia, Canada,have been receiving constant medical care since they were born.

Paediatric neurosurgeon Doug Cochrane, who has looked after them from birth, confirmed they can see through each other's eyes.

He said: 'The twins are sharing signals from the other twin's visual field. 'One twin may see what the other twin does, as the brain of one of the girls receives electronic impulses from the retina of the opposite twin.'

Incredibly rare, only eight cases have ever been documented and just three of those have survived the birth.

The girls had separate bodies but were joined just above the ear and Krista was pumping and filtering the blood through her kidneys. She is basically keeping both of them alive,' Felicia says. The twins say they know one another’s thoughts without having to speak. “Talking in our heads” is how they describe it.

The girls are diabetic and have epilepsy. They take a regimen of pills, blood tests and need daily insulin injections.

The twins go to a regular school and as of September 2017 have started Grade 6. Though academically delayed, they are learning to read, write and do arithmetic.

The twins have three siblings: Sisters Rosa and Shaylee and a brother Christopher, also known as Toad.

The family agrees Krista is the bossy one of the pair, while Tatiana is more laid-back and follows Krista wherever she wants to go.

Felicia said: 'Tatiana is definitely the more laid back girl.

'She does what her sister tells her most of the time, Krista is the bossy one. I call her my little bully.'

The girls have very different personalities. Tatiana is outgoing, talkative and high strung while Krista is quieter, more relaxed and loves to tell jokes. The girls ride a specially-built bicycle, zoom down hills on toboggans, cross country ski and, as part of their physical therapy, are learning to swim.