Millions of houses exist in the world, yet only a small fraction of those are anything special. And whilst it’s easy to simply throw money at a property, it’ll surprise you to see that the most expensive places aren’t always the most amazing and awe-inspiring. From architects and visionaries at the top of their game, here are 20 of the COOLEST Houses you just need to know about.

Sou Fujimoto Architects designed this place to let in a whole new level of natural light. Located on a populated street in Tokyo, Japan, the only thing this house is missing is some privacy. The architects built the 914 square foot home to be like a tree house with layers of living spaces built in throughout. It truly contrasts the typical concrete block walls seen in most of Japan’s dense residential areas.

This bioclimatic solar house is in Cosswiller in the Alsacian countryside of Eastern France. The house acts as a giant three-dimensional sundial, set on a fixed angle in relationship to the sun’s movements to provide shade during the summer months, keeping the inside temperature cool, and during Fall, Winter and Spring sunlight enters the large windows as the sun’s position is lower in the sky, thus warming the living space.

Designed by architect Javier Senosiain of Arquitectura Organica and built in 2006, this house in Mexico City was Inspired by the work of Gaudi and Frank Lloyd Wright. Looking like some sort of seashell, it’s a real house built for a young family with two children who were tired living in a conventional home and wanted to change to one integrated to nature.

The use of shipping containers in residential builds is quite popular nowadays, and this one has to be one of the coolest. Created by architect Sebastián Irarrázaval, this structure is located on a hillside just outside Chile’s capital city Santiago, and boasts views of the Andes Mountains. Moreover, the property measures 350 sq m, and comprises a total of 12 used shipping containers. 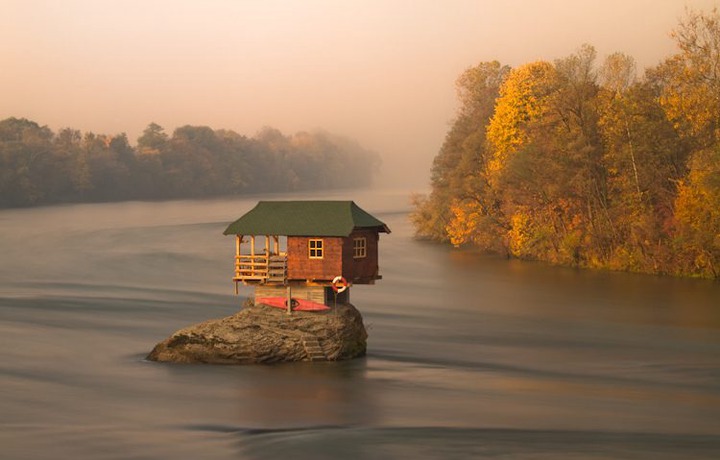 This unusual build stands atop a rock sitting squarely in the middle of the Drina river in Serbia. A group of young men built it in 1968 when they sought a convenient area to lounge in when visiting the river and has unsurprisingly remained a constant attraction to locals and tourists. Nature has been pounding on it since it was built, but it has survived, which is a possible testament to the quality of materials used to build it.

Most people think living under a rock is something to avoid. However, for one Portugese family, it’s a dream come true. Looking like a big boulder, it’s actually surprising to know that this place has a door, a chimney and a window, and has become a huge tourist attraction.

Dubbed “the most minimalist house ever designed”, this house is in California, precisely, in Montecito. The Architect behind the project is Los Angeles starchitect Steve Hermann who initially designed this house for himself. However, after having second thoughts, he sold the place for an estimated 24 million dollars.

Another luxurious pad from California, this four bedroom, six bathroom contemporary building has 10,000 square-foot of space and was sold in May of 2008 for a mere $39 million. Designed by San Diego-based architect Wallace E. Cunningham – it is made of glass, steel and white polished concrete.

Built with maximum regard for the environment and with a cost of only around 5000 dollars, this ‘hobbit house’ from Wales, which resembles the place from lord of the rings, took only 4 months to build. Honestly, it’s got to be one of the cosiest homes ever built, and its construction is very well documented online.

This is probably just an evolved version of the former house. Like a Robo-Hobbit house it is located in the Czech republic and has been constructed by a 73-year -old builder since 1981. Interestingly, they call it the roundabout house because it can rise and fall like a periscope at the flip of a switch – now that’s cool. It was built the way it was because the builder got bored from constructing normal homes. And since it was underground it’s at a stable temperature all year round.

Bringing back some modernity, this three-story abode consists almost completely of concrete and features an unbelievably awesome rooftop swimming pool with a see through foundation. It is in Marbella on the Mediterranean coast of Spain and is truly the type of place that is guaranteed to impress.

This is the narrowest house in the world , but what it lacks in width, it makes up for it uniqueness. This two-story art installation gets its name from Israeli writer and filmmaker Etgar Keret. The building measures a mere 3 foot at its narrowest point and 5 foot at its widest point, so it’s not exactly for the morbidly obese.

This is the most expensive private residential house in the world, valued at upwards of 1 billion dollars. It is owned by one of the richest people in the world, Mukesh Ambani, the owner of a petrochemical company. Every one of its 27 stories has been built to a different specification and because of its enormity, just to maintain it, 600 staff are permanently present in the residence. All things considered, it’s certainly one of the coolest houses. However, some shun it for looking like a huge office skyscraper instead of a house.

This futuristic tower of steel and glass overlooks the rolling hills of New Zealand and was created by Jono Williams, a mild-mannered graphic designer by day, an unabashed dreamer by night. What started as an ambitious design concept became real after he ordered 4 tons of steel from China. $75,000 and 3000 hour later the Skysphere was complete, instantly becoming one of the most imaginative and unusual tiny houses ever built.

This has got to be one of the most amazing wooden styled houses in the world. Architect John Lautner designed this incredible home in the late 60’s in the Santa Monica area and is still a timeless piece of architecture today. The simplicity of its open-plan interior is just as awesome as its exterior. Almost like a birds nest, it also has a balcony which is perched in the upper corner of the living room, making it feel as though you are wandering through the trees.

Treehouses are cool, but this one, which is a unique form of hotel accommodation in Sweden, takes it to a whole new level by maintaining a cool, clean Scandinavian design. The Mirrorcube is a 4 meter wide square hide-out among the trees, camouflaged by mirrored walls that reflect their surroundings, making it almost look invisible from the outside.

Located in FAIRHAVEN, AUSTRALIA and suspended 131 feet above the beach is this dazzling house designed by F2 architecture. It was actually built in the 70s and has since been amazingly restored. To enter the house you’ll have to walk along its dramatic glass walkway which makes it seem like you’re practically floating to your retreat.

The idea of this house came from Architect Phillip Jon Brown who suggested to create a house that looked like a rock formation since the land is situated next to the Santa Monica Mountains National Recreational Area. Unlike most multi-million dollar pads, the interior of this place has irregularly shaped rugged lines to mimic the texture of rocks. Aside from its impressive design, this home also offers a breathtaking view of the Pacific Ocean, Boney Mountains and Los Angeles.

Completed in December 2008, this is a private beach house get-away and luxury rent al villa located on the North coast of the Dominican Republic. Situated on three acres of pristine property surrounded by almond trees and coco palms, it also lies on a cliff meaning that each of its full eight suites has an incredible panoramic view of the Atlantic Ocean.

What do you do when there’s not enough space to build a full home on a piece of land? Built it on a waterfall, like this house in Pennsylvania which was designed by the architect Frank Lloyd Wright, who is one of the most famous architects ever. This home is so amazing that it was on the cover of Time magazine in 1938 and is appropriately called ‘falling water’. It was finished after three years in 1939 instantly became famous, standing as a National Historic Landmark today. In addition to its subtle exterior which matches its surroundings, the interior is spacious and also decorated to match the aesthetics of nature.

All houses considered, which one would you choose to live in?

Don't forget to drop a comment below before leaving.