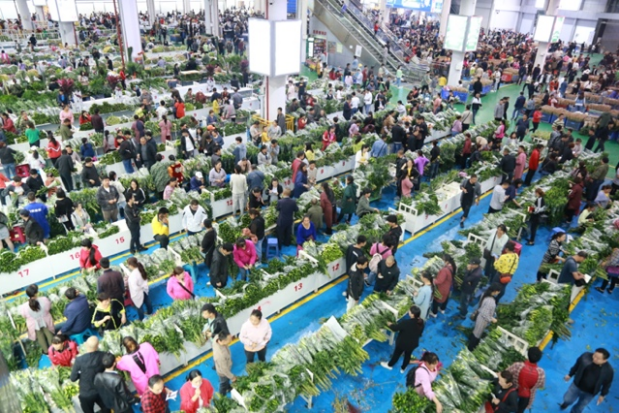 The Dounan Flower Market, located in southwest China’s Yunnan province, usually ushers in its peak of business at around 4 p.m., when trucks fully loaded with fresh flowers converge on the market. Citizens flock to the market to buy flowers, tourists are attracted by its reputation, and florists are always seen doing livestreaming shows to promote sales.

Nearly 70 percent of China’s fresh cut flowers are traded at the Dounan Flower Market, Chenggong district, Kunming, capital of Yunnan province. With more than 110 major categories and over 1,600 varieties of flowers, the market has ranked first in China in terms of volume of business, cash flow, and the number of traders for many years in a row.

While it is now regarded as the wind vane and barometer of China’s flower market, the Dounan Flower Market was only a street market where flowers were sold retail in the 1990s.

“Over 20 years ago, flower growers would cut flowers, tie them into bundles, put them into wicker baskets and then carry them with shoulder poles to the street flower market for sale,” recalled Hua Mingsheng, a shop owner in the Kunming Dounan Flower Market, adding that flower retailers would walk their bikes around the market and make a purchase.

Hua still remembers that the old market, located at a street corner of Dounan village, Chenggong district, was packed with flower growers and retailers, and stacks and bundles of flowers occupied both sides of the road.

Hua runs a potted plant shop in the Dounan Flower Market. He often explains the planting methods of different plants to clients patiently. 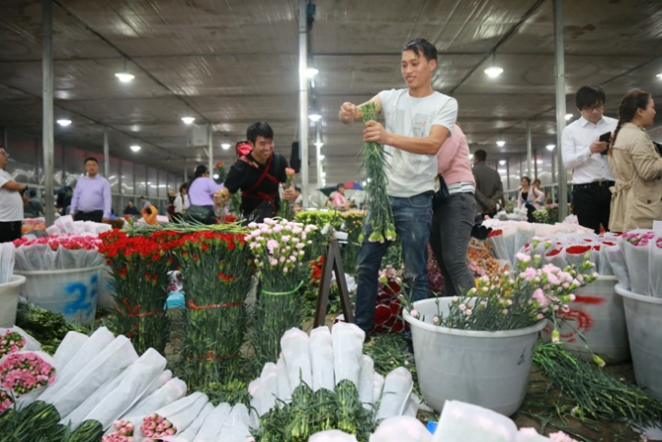 In the late 1980s, Hua planted the first pot of carnations in Yunnan. In 2002, the Kunming International Flora Auction Trading Center was officially established in Dounan village. The first product auctioned at the center, fresh cut roses, was also planted by Hua.

From an ordinary farmer to a senior plant technician, Hua has witnessed the journey of local flower growers in more than 30 years.

In 1987, Hua, who was 24 years old, spent almost all the savings of his family on gladiolus seed balls and started to grow gladiolus on about 66.67 square meters of contracted land, becoming one of the first batch of flower growers in Dounan village.

Three months later, the first batch of gladioli flowers were cut and sold for more than 160 yuan ($23.68). “The profit is several times higher than that generated by growing vegetables,” Hua thought. Hua and other young people in the village discovered the business opportunity in growing flowers.

Flowers planted by Hua were very popular back then and some of them, such as carnation and babysbreath, were brand new varieties to local people.

“They were always sold quickly in the market and some flower retailers even waited by the fields to buy the flowers,” Hua said.

Later, 95 percent of the peasant households in Dounan village started to grow flowers, instead of vegetables. They gradually introduced farming facilities into flower planting and stepped toward large-scale planting with more flower subdivisions. 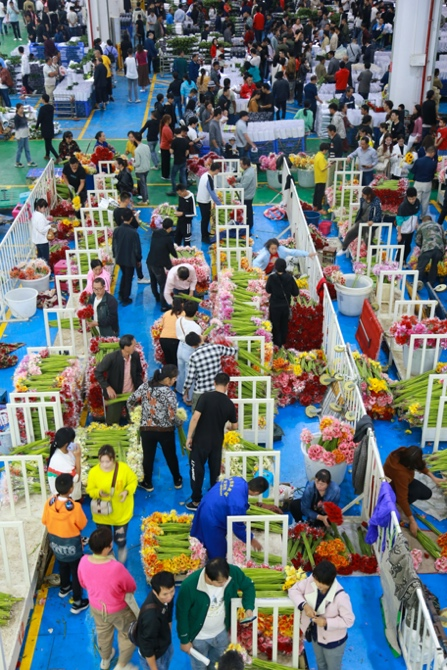 The local government also rolled out policies to encourage local flower growers to rent land from other areas of the city so as to expand their planting areas. Hua and his friends pooled their capital and rented a total of about 20 hectares of land to grow cymbidium in Jinning district and Shilin Yi autonomous county of Kunming.

In 2012, Hua’s son returned to his hometown after finishing his study in Tailand, and took over the flower planting business of his father. Since he can speak good Thai, the young man started to explore the Thai market for export and import of tropical plants. Just recently, he successfully exported 5,000 pots of small potted plants to Thailand.

A number of young people like Hua’s son, who have been familiar with flowers since they were little, know about the market and skills, and boast vision, have infused more vitality to the flower industry in Dounan village.

Dounan village is no longer simply a base for growing flowers, but a synthesis of new forms of businesses covering auction, logistics, research and development, and agricultural resources. The village has shifted its focus from production into market-oriented services.

Last year, the annual sales volume of fresh cut flowers in the Dounan Flower Market reached nearly 7.44 billion yuan, and 9.2 billion stems of fresh flowers were sold to different parts of the country and exported to more than 50 countries and regions around the world.

The small village standing near the bank of Dianchi Lake has now become a heavyweight among fresh cut flower trading markets in Asia, and helped create jobs for more than one million people.