By Spankinghot (self media writer) | 11 months ago

Protest has rocked Ibadan, the capital of Oyo state over the raid by the Department of State Services DSS on the house of a popular Yoruba Nation activist Sunday Igboho on Thursday night. 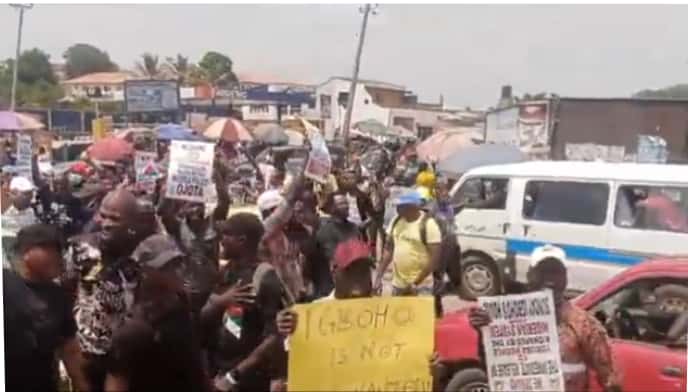 According to the Punch News, it said that the supporters of the wanted activist took to the streets of Ibadan to kick against the action of the DSS.

They had gathered in front of Igboho’s house in the Sooka area of Ibadan, from where they took to the streets around noon on Wednesday.

Carrying various placards with different inscriptions, they were heard chanting "No retreat, no surrender!”, “Oodua Nation!”, “Sunday Igboho is not a criminal!” while marching on the streets.

Before taking off from Sunday's residence, the protesting youth were addressed by their leader, whose name could not be immediately identified by the news agency.

Speaking, he noted that they would march to the Palace of the Olubadan of Ibadanland, Oba Saliu Adetunji; to lay their complaint before marching to the Government House and other places to do same.

He was quoted as saying that the protest would be a peaceful one, as they march to demand the release of the detained persons, saying they are only demanding for the rights of their people and were not afraid of teargas.

He also stated that they wanted the killers of the two guards in Igboho's house to be brought to justice and the payment of N500 million demanded by his (Igboho) lawyers for the destruction of his properties.

Adding, he stated that they want the Obas to make their demands happen in seven days.

Recall, the Presidency had hailed the decision of the security agency in raiding the house of Igboho.

According to a statement by Garba Shehu, a Senior Special Assistant to the President on Media and Publicity titled 'Presidency Statement On The Recent Successes Of Security And Intelligence Agencies’, he described Igboho as a 'militant ethnic secessionist' whose public statement have metamorphosed into hate speech.