By Jsharpz (self media writer) | 26 days ago 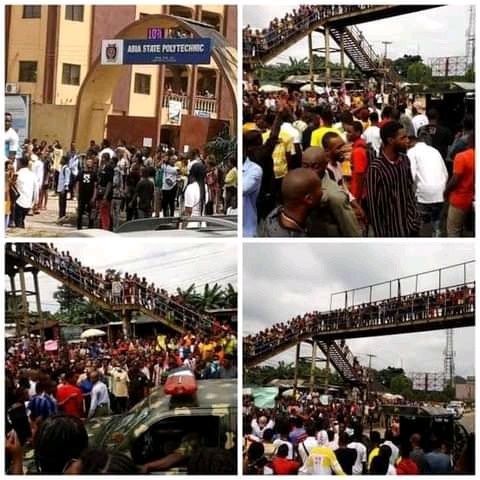 Instablog9ja gathered that Abia State Polytechnic students protest the alleged raping of their 18-yr-old colleague by some force men (SARS).

The Operatives of the Rapid Response Squad (RRS) in Aba, have been accused of molesting an 18-year-old female student of the institution.

Following a report, one of the students, who staged a protest on Thursday, said that the RRS officers earlier apprehended six of their students but later freed five of them, leaving the young girl behind.

One of the student, who didn't disclose his identity said, “they apprehended three young guys and three girls at a residence near to the school yesterday evening. Drove them to their to their station and demanded money from them, after the extortion, they released all the students except the girl."

The source said, "the 18 years old girl was later hospitalized and according to her, she was molested by three officers. The young girl is still in the hospital and in a critical condition."

"Due to these development, the semester examination that was scheduled to start today has be postponed till further notice due to the protest", she added.

I think these officers needs to face the consequences. They should leave by example.

What's your suggestion towards this?

Content created and supplied by: Jsharpz (via Opera News )