By Joshua (self media writer) | 7 months ago

Justice Doris Okuwobi (retired), the panel's Chairperson, made the announcement on Saturday. The Lagos State Judicial Panel Of Inquiry, which was established to investigate police brutality, has put its work on hold until further notice. 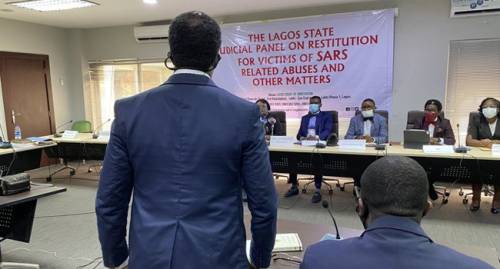 The panel was scheduled to wrap up its work on October 19.

This comes only hours after Ebun-Olu Adegboruwa (SAN), a member of the panel, warned of plots to sabotage the team's ability to make relevant conclusions on the October 20 Lekki Toll Gate event.

Many Nigerians flocked to the streets in October 2020 to protest police brutality as part of the #EndSARS campaign.

The Nigerian Police Force's special anti-robbery unit (SARS) was disbanded as a result of the demands.

The Lagos State Government established the judicial panel of investigation and restitution on October 19, 2020, to investigate accusations of human rights violations by operatives of the now-defunct SARS and other security agencies.

The panel was granted a six-month mandate to consider complaints submitted by members of the public, with a compensation fund of N200 million set aside.

The panel's session was supposed to expire on April 19, but it was prolonged three months till July 19.

It was then given an extension of three months to hear petitions, and it was scheduled to wrap up on October 19th.

Content created and supplied by: Joshua (via Opera News )