October 2020 is a month that will forever remain in the history book of Nigeria. Unlike the 1967-1970 civil war and the Asaba massacre that got little media coverage and left many horrible stories untold, the EndSars protest is an anecdote that can never be bought, denied, or buried, never ever.

We will tell it to our children, and our children's children, and instruct them to tell it to their children and children's children. We will show them book references, photo archives, films that tell the true story, newspaper publication, Youtube videos, links to articles written about it online, and many more. The October 2020 EndSars protest has become an undeniable part of us and we will keep the memory. 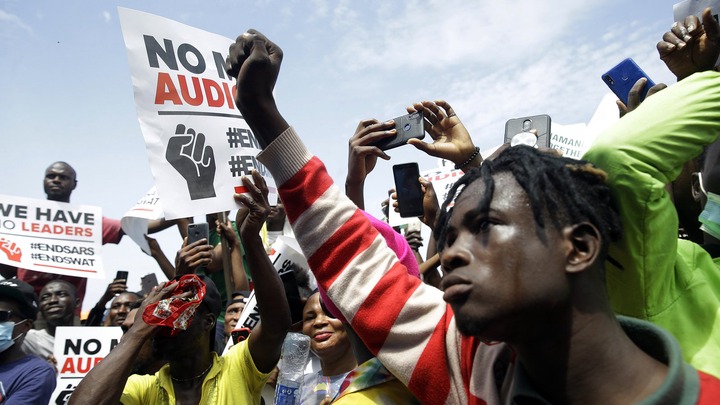 Why this is particularly special for me is the unity with which most Nigerian youths came together and fight for the soul of the country. This has never happened before. Many parts of the country have witnessed protests in the past, most notably was the OcuppyNigeria protest during the regime of President Goodluck Jonathan, but in that case, it was easy for authorities to disperse the movement because they could identify and lay their hands on leaders of the protest.

But EndSars protest took a different dimension. Massive protest all over the world, financial support from ordinary Nigerians at home and abroad, medical professionals giving free medical assistance to wounded victims, hospitals treating people for free, owners of destroyed cars getting compensated from monies contributed, food vendors, delivering different delicacies to protest grounds and feeding protesters for free or sponsored by another young Nigerians. What about the legal support? It was so on point and timely too. Lawyers stormed out of their comfort zones to effect the release of arrested protesters. Massive social media campaigns, transparency, honesty, and accountability. Everybody felt protected, carried along, and supported.

This has never happened before. While the government was initially trying to clamp down on celebrities and activists, there was denial from the public who declared that they have no leader. This crippled government's attempt to silence the protesting youth. Before then, there was a move to cause division among the protesters when hoodlums were sent to cause chaos at protest locations, but that only made the people more united and focused on the goal, which was to end extrajudicial killing by the Special Anti Robbery Squad (SARS), stop police brutality and harassment, and put a stop to bad governance among other things. 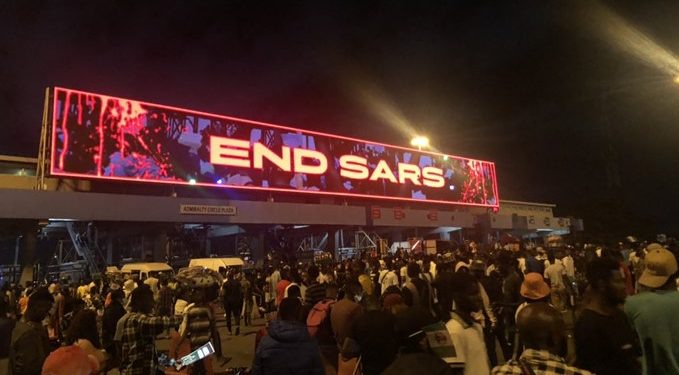 I remember Wizkid left Nigeria after speaking out in support of EndSars, Davido was even invited for questioning in Abuja, while comedian Mr. Macaroni was arrested and harassed at the Lekki Tollgate. Falz could not be touched because he and his father are lawyers but as I type this, DJ Switch has since left Nigeria for fear of persecution after going live on Instagram showing the military shooting at peaceful protesters on October 20, 2020.

There are so many things to remember the EndSars protest for. But there are so many questions left unanswered even one year after the historic protest which drew the attention of world leaders and celebrities.

Top on my list of many unanswered questions is: Where is CSP James Nwafor? 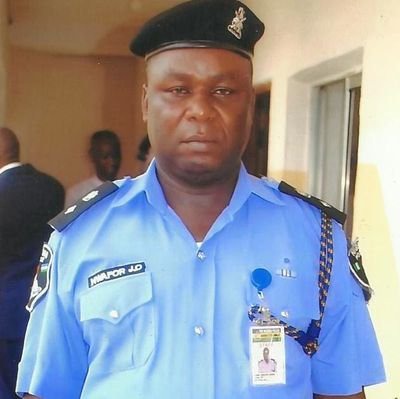 The retired police officer headed the disbanded Special Anti-Robbery Squad (SARS) unit of the police in Awkuzu, a town in Oyi Local Government Area of Anambra, for more than five years and was appointed a Senior Special Assistant on Security to Governor Willie Obiano upon his retirement. He has been accused by hundreds of residents of human rights violations and extra-judicial killings.

“Human rights defenders in Nigeria cited the case of James Nwafor who headed the SARS unit in Awkuzu, Anambra state. Despite several petitions from lawyers and HRDs detailing his involvement in torture and extrajudicial executions, he was merely transferred to Bauchi police command in January 2016. However in September 2016, James Nwafor was again transferred back to SARS unit Awkuzu,” a report by Amnesty International said. 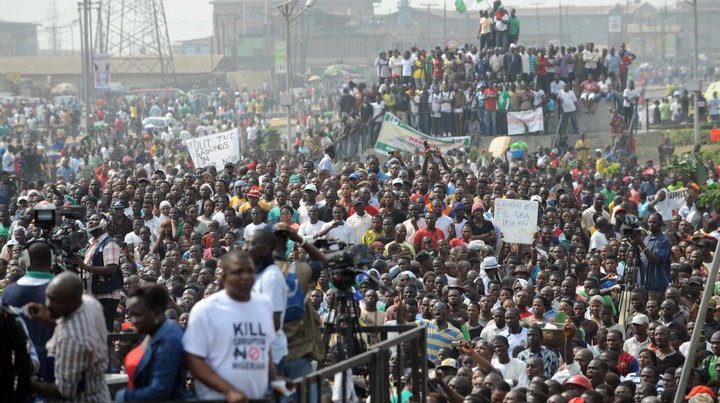 Though he has since been relieved of his political appointment, I can't help but ask for his whereabouts at the moment. Is Nwofor presently under trial and at what level has the trial gone? Has he been jailed? Where is he serving his sentence or where is his trial taking place? Or is he somewhere in the Bahamas cooling off with some warm sandwiches and chilled Spanish red wine, enjoying soft massage from some beautiful creatures by his side, while spending his alleged ill-gotten wealth stained with the blood of innocent people? I would like to know which one of these states he is in right now.

While I ponder on that, I quickly remembered that Lagos State governor Babajide Sanwo-Olu is yet to answer the question about who ordered the shooting at the Lekki Tollgate on October 20. 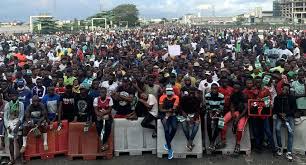 The Nigerian Army initially denied involvement in the shooting, but later stated that it had deployed soldiers to the toll gate on the orders of the governor of Lagos State. A month after, following a CNN documentary on the shooting, the Nigerian Army admitted to the Lagos Judiciary panel of inquiry into the shooting that it had deployed its personnel to the toll gate with both live and blank bullets. While the Lagos State government has compensated some victims of brutality and rebuilt most of its facilities destroyed, Sanwo-Olu has never admitted to giving the shooting order to the army. How long are we going to wait for the answer from Mr. Governor?

One year after the brutal killing of 20 years old Jimoh Isiaq in Ogbomoso, Oyo State, I have not heard or read of justice being served his killers. This is another concern that has gotten my attention. On Saturday, October 10, 2020, Jimoh, a bystander was shot and killed by the policemen dispersing #EndSARS protesters. He was rushed to Bowen University Teaching Hospital but could not make it. After his death, the only news that followed was a visit by the Sports Minister Sunday Dare to his family and financial compensation, but the trigger-happy policeman who shot him has not been held by the law. He probably will still be an officer of the Nigerian Police Force right now and going about his life like nothing happened. 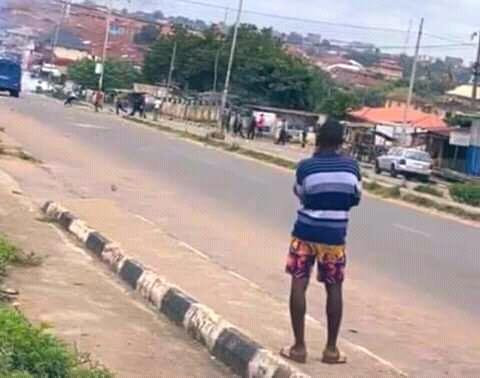 Where are the federal security operatives seen in a video driving official government vehicles coordinating hoodlums to attack peaceful protesters in Abuja? Have they been identified, tried, and prosecuted? Or they are adjudged to have committed no crime but just carrying out directives from their bosses, or bosses of their bosses?

What about the hoodlums that burnt down over 50 cars at Apo Mechanic village in Abuja on October 19? Are they still walking freely around the country and apparently preparing themselves for the 2023 general elections or they are in jail for committing arson? Where is that guy who led a group of ruffians to Nigeria Police Headquarters in Abuja to deliver an ultimatum letter for protesters to vacate the streets? The same guy also had the gut to deliver his warning speech before the press, and nothing was done to him. These and many more are questions that are begging for answers from those that know. 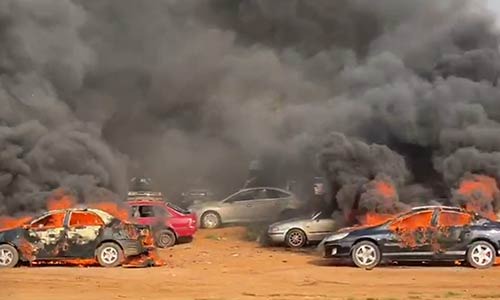 The EndSars protest in 2020 was followed by an open ethnic and religious division among Nigerians in 2021, especially between the north and the south. The huge population of youths is fed up with being marginalized, shut down, and treated like second-class citizens. This is a clear message to the Nigerian government that its citizens have since grown beyond taking mere promises and crumbs meals, into having a feeling of belonging, seeing the systems work, and having a say in a safe environment. Whether the authorities decode those messages or not is up to them.

The youth have now decided to remember victims of EndSars protest, as a matter of fact, we are all victims in one way or another whether directly or indirectly. The youth must be allowed to do their memorial programs in peace with adequate police protection, and not attack. The memorial is to remember the day Nigerian youth came together in unity, one voice, and stood against police brutality, failed system, and bad government, we deserve to remember this day with or without government permission till eternity comes. 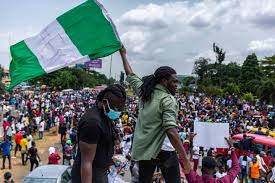 The youth should also maintain their focus, shun violence, and speak in one voice, while also guiding against hoodlums who could show up. No attacking of police or any security personal whether, on mufti or uniform, government or private facility must not be touched. The idea is to remember victims of EndSars and let them know that they live in our hearts, and so we can't afford to do that in violence.