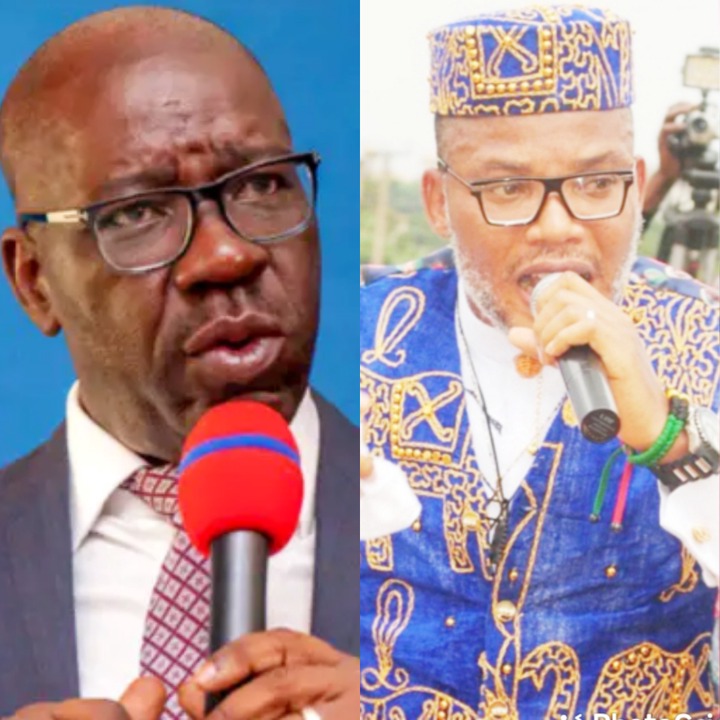 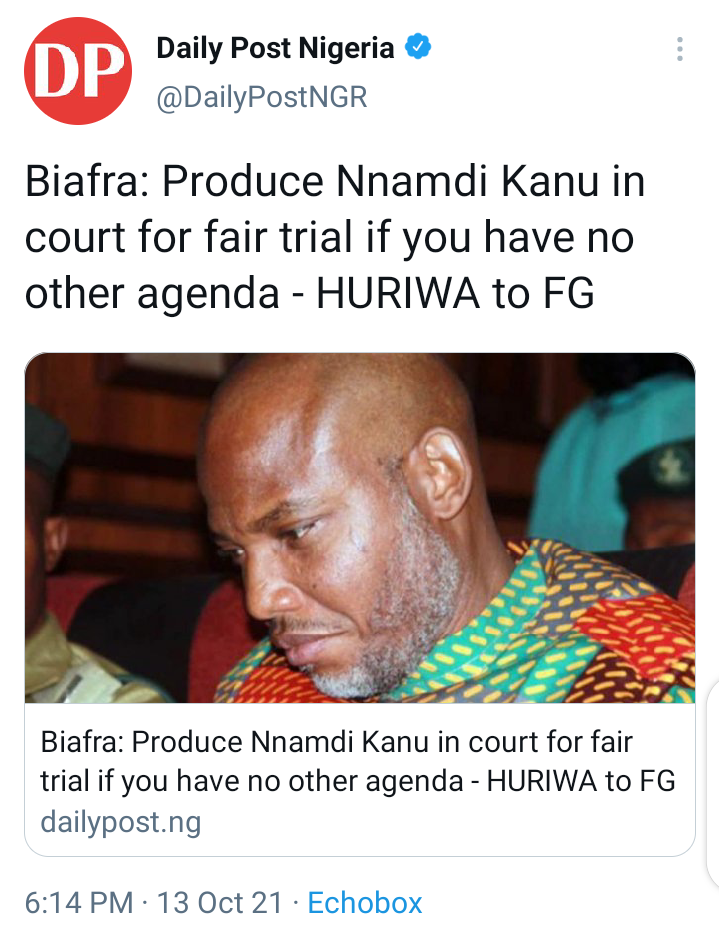 The Human Rights Writers Association of Nigeria, HURIWA, has called on the Attorney General of the Federation and Minister of Justice, Abubakar Malami, to produce the detained leader of the proscribed Indigenous Peoples of Biafra (IPOB), Mazi Nnamdi Kanu in Court for trial.

The group said Abubakar Malami should do that urgently if he has no subterranean motive to instigate the economic collapse of South East of Nigeria should the self-determination group implement her threat to call for a full month of sit-at-home order.

DAILY POST reports that Kanu, who is currently detained at the custody of the Department of State Services, DSS has been scheduled to resume his trial on October 21.

The trial, which was previously billed to commence shortly after he was rearrested from an undisclosed country, was adjourned by the Federal High Court of Nigeria, Abuja following the inability of the DSS to produce the secessionist in court. 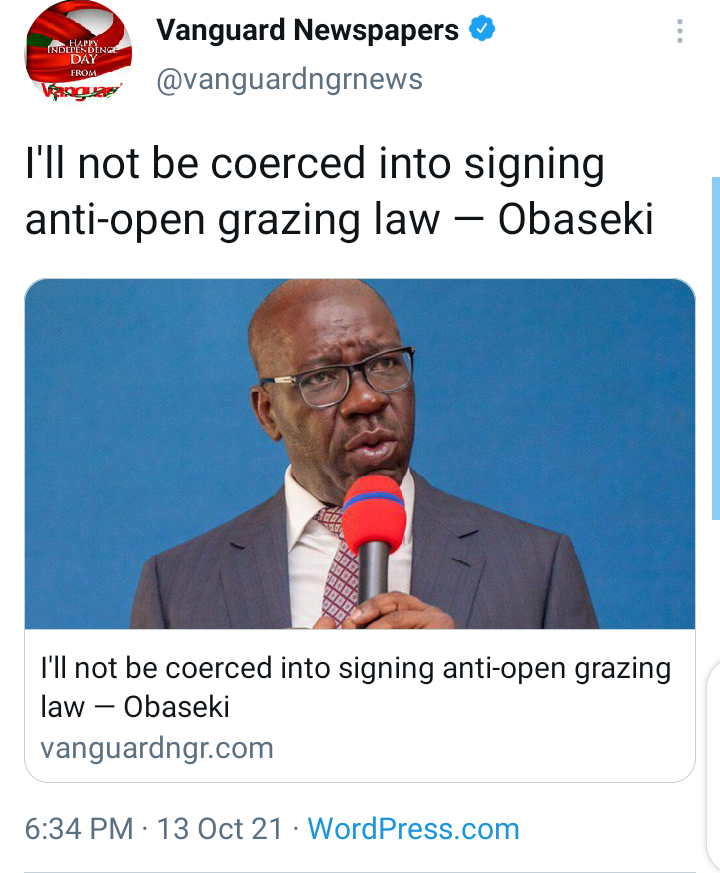 Edo State governor, Godwin Obaseki has insisted that he will not be coerced into signing Edo Anti-Open Grazing Law without wide consultations with the people just as he charged the people to separate killer herdsmen from the genuine ones.

Meanwhile, the State chairman of Cattle Breeders Association known as Miyyeti Allah, Alhaji Mohammed Fosal, has exonerated indigenous Fulani ethnic group who are into livestock farming from reported killings and responsible for farmers and herders conflicts in some parts of Edo State.

Governor  Obaseki who presided over a town hall meeting on the anti-open grazing law in Benin, stated that his administration will not want to rely on needless arguments by some individuals who were intolerance of herders to put up a law that would be difficult to implement in the State, hence the need to brainstorm. 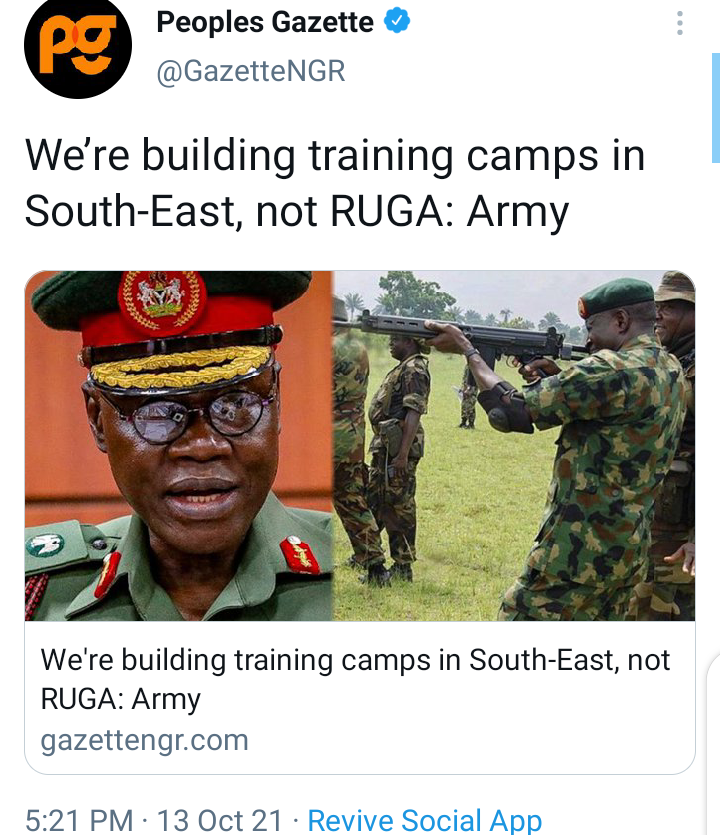 The Nigerian Army says its engineers are not constructing RUGA settlement in the South-East as being portrayed and speculated by an outlawed online radio.

In a statement released on Wednesday, the acting Deputy Director, Army Public Relations in the 82 Division of the Nigerian Army, Abubakar Abdullahi, said that the allegation that engineers from the Division are currently constructing a RUGA settlement in the South-East is baseless.

He said that the fabricated report had it that military engineers are building the settlement between Ochima and Affa in Igbo-Etiti and Udi Local Government Areas of Enugu State.

“Though this inciting broadcast emanates from a source bereft of any credibility whatsoever, there is need, however, to present the facts clearly for the sake of posterity.

“It must be emphasised that the Nigerian Army engineers are not constructing any RUGA settlement in any part of Nigeria.

“Rather, the engineers are currently constructing a military training facility between Ochima and Affa in Igbo-Etiti and Udi Local Government Areas in Enugu State respectively.

“Upon completion, the facilities will accommodate troops during training and aid to improve their efficiency in protecting law-abiding citizens across the South-East.