Why Sunday Igboho Was Chained By Beninese Police–Lawyer explains

By Offblackmedia (self media writer) | 10 months ago 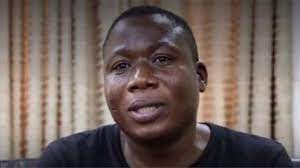 Olusegun Falola, the attorney of Yoruba Nation activist and well known as Igboho, Sunday Adeyemo, has explained why the activist was initially chained by security agents in the Benin Republic.

Falola revealed that Igboho was chained to prevent him from disappearing mysteriously.

Falola says that he was informed by Beninesian security agents that Igboho is capable of turning into a cat and escaping.

When I arrived from Paris and reached the custody where Igboho was being held, he was chained up. Because of his mystical abilities, they were afraid he could disappear into thin air.

I was told that once Igboho's chains were untied and he escaped mysteriously, the police officer (who'd been overseeing the operation) would lose his position as well as his job.

According to the police officer, Igboho could disappear or transform into a cat, as well as other things that made them tie him up.

But the lawyer himself revealed that it was only because of his timely intervention that the officers unchained Igboho.

Igboho was reported to be awaiting his fate in Cotonou's Court of Appeals after being charged with immigration-related offences by Benin's authorities.

According to reports, Igboho was arrested at Cardinal Bernardin International Airport in Cotonou when he tried to leave the country for Germany.

A "Yoruba Nation Rally" was planned by Igboho in Lagos two days before the raid.

The DSS raided the residence, killing two and arresting 12 aides, but Igboho escaped.

Igboho was accused of stockpiling weapons and declared wanted by the agency. what's your opinion about this? drop comments below and don't forget to follow me for more updates, thank you.