By Salaf (self media writer) | 9 months ago 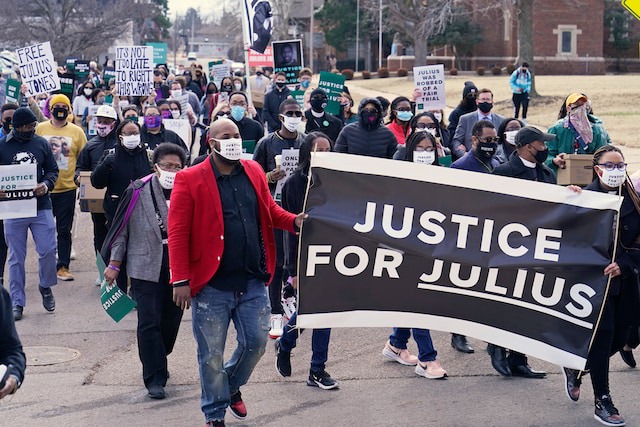 The Oklahoma pardon and parole board has voted 3-1 to recommend a commutation for death row inmate Julius Jones, a decision that moves the high- profile death penalty case to its final phase before the governor.

“The governor takes his role in this process seriously and will carefully consider the pardon and parole Board’s recommendation as he does in all cases,” Charlie Hanneman, a spokesman for Stitt, told The Washington Post in an email immediately following Monday’s vote.

Monday’s vote represents an extraordinary victory for Jones, 41, who has spent half of his life on death row while maintaining he is innocent. Jones cleared the first hurdle in the state’s commutation process in March. If Stitt accepts the board’s recommendation, Jones will be the fifth person since 1973 to be granted clemency from Oklahoma’s death row.

Jones was 19 when he was arrested in 1999 for the murder of Paul Scott Howell, a father of two and well-known businessman in the Oklahoma City suburb of Edmond. Howell, 45, was fatally shot in the driveway of his parent’s home after returning from a shopping trip with his sister and two young daughters.

Jones has maintained since his arrest that he was not involved in the Howell’s murder. His post- conviction lawyers said Jones co-defendant committed the murder but implicated Jones after securing a deal with prosecutors; they also alleged that Jones’s trial was tainted by racial bias and that he was failed by ineffective lawyers in his trial phase.

Last month, Connie Ellison, Howell’s girlfriend at the time of the murder, spoke to The Post about how her doubts over Jones’s guilt have grown over the years. Ellison had remained close with the Howell’s family until recently and ultimately decided to submit testimony with the defense in support of Jones’s petition.

The roughly three- hour hearing began on Monday morning with rare comments from the Howell’s family, including his sister, Megan Tobey, who witnessed the murder, and his eldest daughter, Rachel. The family has rarely granted interviews in the two decades since Howell was killed but has remained confident in Jones’s guilt.

“I was there when my brother Paul Howell was murdered,” Tobey said during the family’s 30-minute period to address the board. “I know beyond a doubt Julius Jones murdered my brother”.

Bill Howell Jr., Howell’s older brother, called Jones a “thug” and a liar. Rachel Howell spoke about how painful Jones’s on-going legal battles have been for her and the family.

Amanda Bass, one of Jones’s federal public defenders, said prosecutors relied on junk science and the testimony of police informants to convict Jones and were allowed to raise unproven assumptions in their cases against him.

“We in no way wish to exacerbate the Howell family’s pain,” Bass said during Monday’s hearing. “We desire only justice and justice will not be achieved by executing an innocent man”.

Monday’s hearing is the culmination of several contentious months between Oklahoma District Attorney David Prater (D) and the board: Prater sued the board over alleged conflicts of interest and petitioned that Jones’s death penalty conviction remain in place. Oklahoma Attorney General John O’Connor (R) has supported those efforts and requested an October 28 execution date for Jones.

Lawyers for Jones and other death row inmates have filled legal challenges against the state, which has not carried out the death penalty since 2015 following a string of botched executions.

Prater’s office continued to try to have members of the board disqualified over alleged bias and last week petitioned the Oklahoma Supreme Court to stop members Kelly Doyle and Adam Luck from participating in the commutation hearing. The court declined to intervene. Doyle Luck and board member Larry Morris voted in favour of recommending Jones’s sentence be commuted to life with the chance of parole, while board member Richard Smothermon voted against.

Scott Williams, a fifth board member, recused himself at the start of the meeting out of abundance of caution after Prater raised objections about alleged conflicts of interest.