By Insidenaija1 (self media writer) | 26 days ago 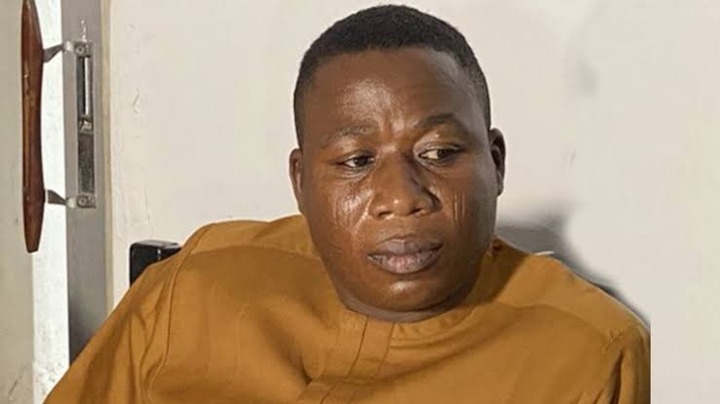 Yoruba Nation freedom fighter Sunday Adeyemo, popularly known as Sunday Igboho, has reacted to the Federal Government's purported plan to file fresh charges against him after the judgment of Oyo State High Court which awarded N20 billion in damages in his favour, Newspremises reports.

Newspremises recalls that Ighoho's Lawyer Yomi Alliyu, SAN, had previously filed a N500 billion fundamental human rights enforcement suit against the AGF, DSS and the Director of the SSS in Oyo State over the invasion of his home in Ibadan, on the 1st of July 2021.

Mr. Alliyu however, claimed that his client’s house and cars were damaged, while two occupants of the house were killed by SSS operatives during the incident.

The presiding judge, Ladiran Akintola, had awarded the money as “an exemplary and aggravated damages” against the AGF and the State Security Service (SSS), over the invasion of Adeyemo’s home in Ibadan, on July 1.

But, Abubakar Malami, Attorney-General of the Federation (AGF) and Minister of Justice, has declared that FG had the right to appeal the judgement or file a fresh charge.

Malami who made the disclosure on Thursday, September 23, while speaking in New York at the United Nations General Assembly, noted that position of the federal government on the judgment was about “law and jurisdiction. 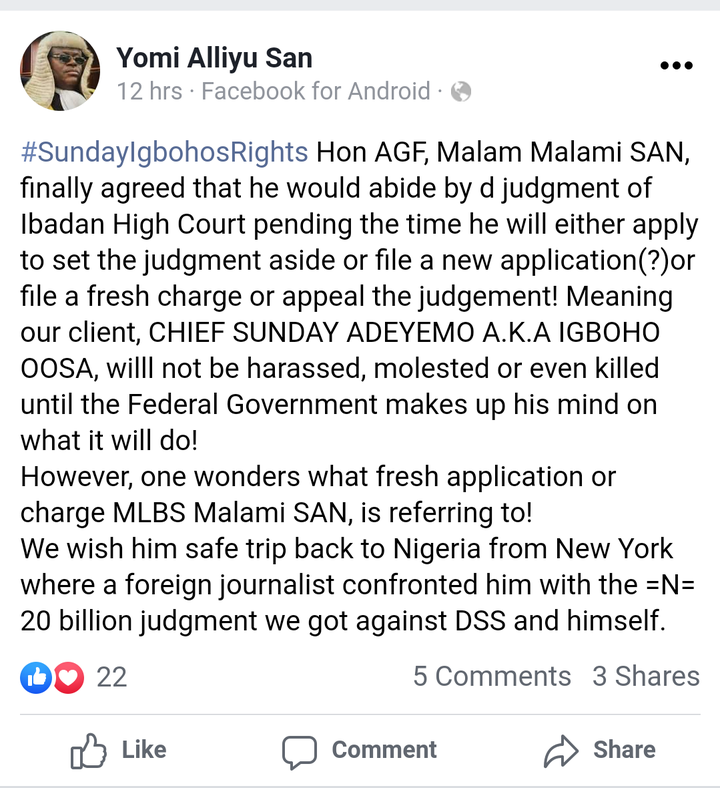 "As far as this matter is concerned, which court is it that has the jurisdiction to determine it? And as you rightly know, obedient to court orders and court judgments. But then you have to understand within the context of such obedience that there are associated rights and interests that are vested in the Federal Government.'' He told journalists.

“Inclusive of rights of appealing against a judgment, inclusive of right to file an application for setting aside the purported judgment and order, and inclusive of the possibility of filing a fresh action, if, indeed, the jurisdiction of the court that was alleged to have handed that judgment is an issue.

“So, we are doing the needful in terms of looking at the law as it exists, and then working within the context of the law in ensuring that justice is done as far as the contending issues between the parties are concerned,’’ the minister explained.

Reacting to this, through a post on his verified Facebook page, Igbo's counsel, Yomi Alliyu said that, Igboho will not be harassed or killed by the Nigerian Government, questioning what other charge they have against him.

“#SundayIgbohosRights Hon AGF, Malam Malami SAN, finally agreed that he would abide by the judgment of Ibadan High Court pending the time he will either apply to set the judgment aside or file a new application(?) or file a fresh charge or appeal the judgement! Meaning our client, CHIEF SUNDAY ADEYEMO A.K.A IGBOHO OOSA, will not be harassed, molested or even killed until the Federal Government makes up his mind on what it will do!

“However, one wonders what fresh application or charge MLBS Malami SAN, is referring to!

“We wish him safe trip back to Nigeria from New York where a foreign journalist confronted him with the N20 billion judgment we got against DSS and himself.”

Content created and supplied by: Insidenaija1 (via Opera News )