By Enter10mentHub (self media writer) | 6 months ago 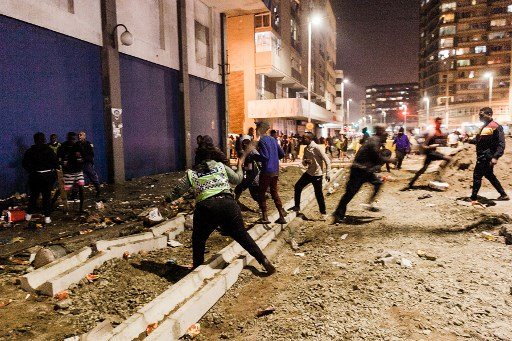 Buildings were set on fire and properties looted in South Africa on Monday as unrest sparked by the jailing of ex-president Jacob Zuma last week continued for a fourth day. 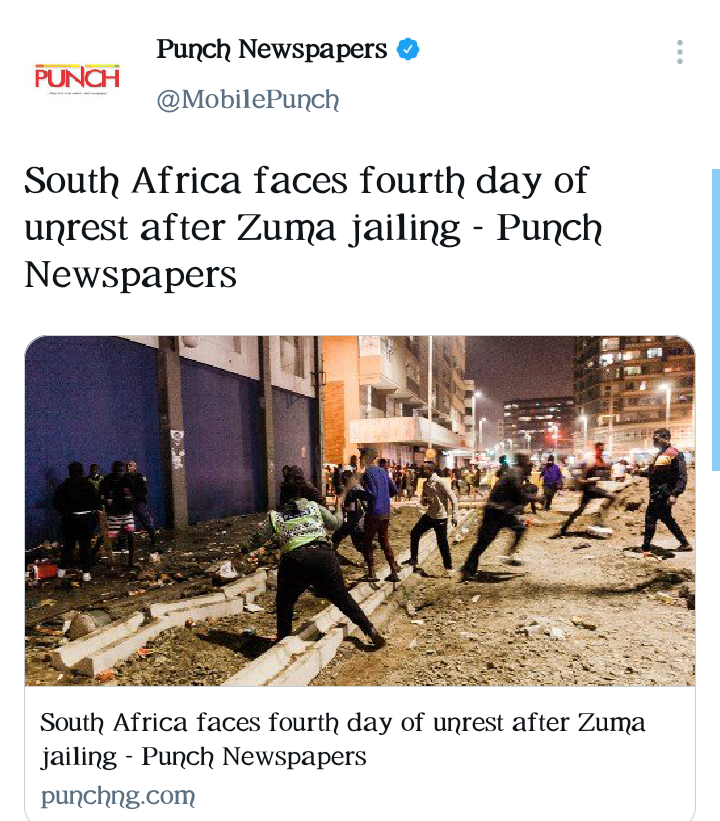 The country’s top court, which ordered Zuma jailed for refusing to appear before a corruption probe, is holding a review of its decision with a ruling expected later on whether the sentence will be upheld.

The 79-year-old former anti-apartheid fighter remains popular, especially in his native KwaZulu-Natal province where he is seen to embody traditional values.

KwaZulu-Natal was hit hard by protests over the weekend, and on Monday flames could be seen coming from the roof of a shopping centre in provincial capital Pietermaritzburg as hordes of people rushed in to loot.

In Eshowe, a town near Zuma’s Nkandla home, police opened fire to disperse crowds after a supermarket was ransacked early on Monday.

Police said some sections of a major road in Johannesburg had been closed because of the protests.

Dozens of cars were torched over the weekend in Johannesburg and KwaZulu-Natal, where protests erupted a day after Zuma was imprisoned on Thursday. 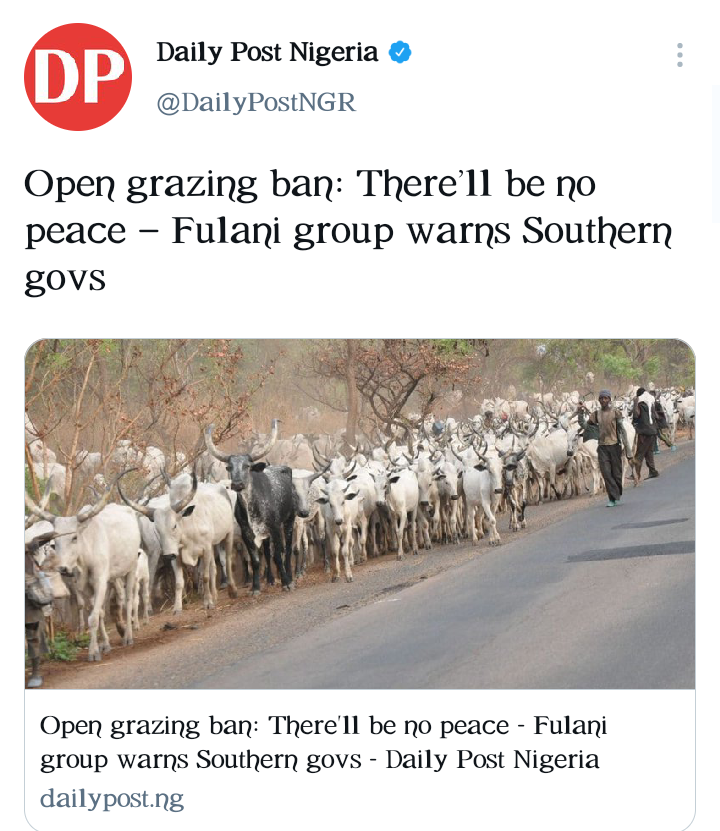 GAFDAN said a ban on open grazing would lead to a breakdown of peace between Northerners and Southerners.

The group insisted that the decision of the governors would groom hatred between Southerners and Northerners.

Southern governors under the umbrella of the Southern Governors’ Forum, SGF, had agreed to ban open grazing in their region.

During their meeting in Lagos State, the governors agreed that the ban would take effect from September 1.

Abdullahi said the resolution was impossible because they have not made an alternative plan for herders.

According to Abdullahi: “If you stop open grazing in the South, you are simply saying that those people should move to the North or they should move to other parts of the country. What happens if those in the North also ask the Southerners to leave?

“Are we promoting unity or hatred? What the governors are saying is practically impossible and it does not promote the unity of this country.

“You don’t stop people’s means of living and expect peace to reign. So, the implication is that the unity of Nigeria is going to be in question.

“You don’t expect those that will be affected to return to the North and live in peace with people from the South living in the North”.

The Governor of Edo State, Godwin Obaseki, has promised that his administration will not engage in “disrespectful exchanges” with the Oba of Benin, Ewuare II, over stolen artefacts. 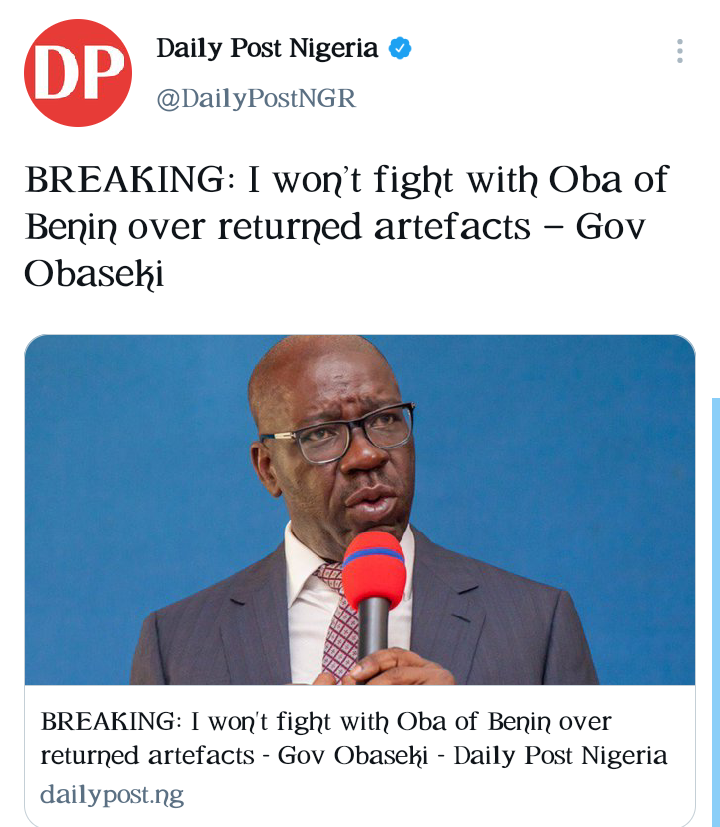 This was disclosed in a statement issued on Monday, by the Secretary to the Edo State Government, Osarodion Ogie.

The Oba of Benin had warned that the artefacts to be returned, is not the property of the state government or any private corporate entity that is not a creation of the Benin kingdom.

The monarch warned that no state government or any individual can pose to be a legitimate destination for the artefacts to be repatriated.

In a statement by the monarch read by Chief Sam Igbe, the Iyase of Benin Kingdom, the Oba said the Benin Royal Museum is designed and will be sited within the precinct of the Palace of the Oba of Benin from where they were looted.

Ex-Zamfara State Governor, Ahmed Yerima, says he will step down his presidential ambition in 2023 if the ruling All Progressives Congress zones the ticket to the South. 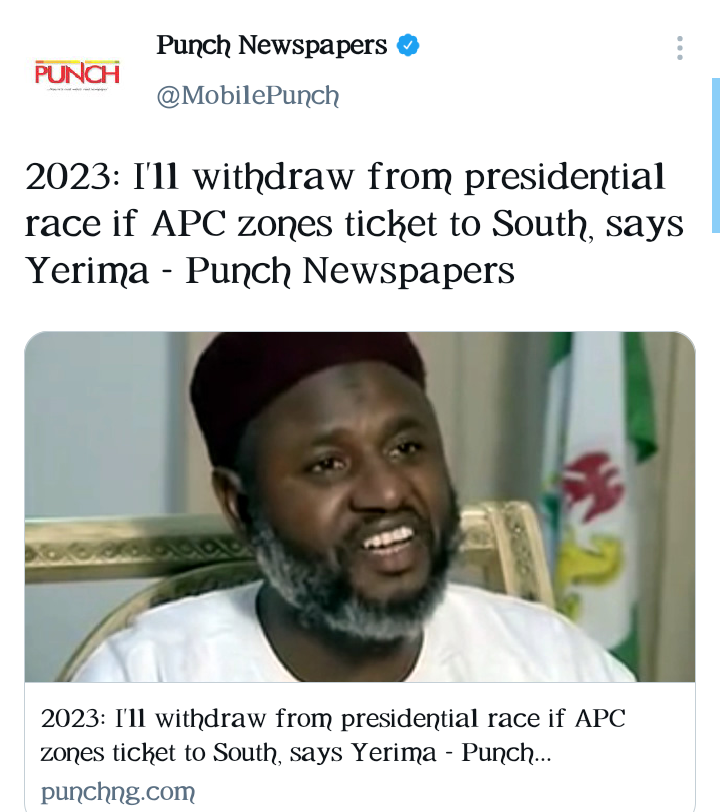 Yerima bared his mind on the 2023 general elections while addressing reporters in Abuja on Sunday.

The erstwhile senator, however, said he had not seen the reason for backing out of the race, not even with the call by the southern governors at their last summit in Lagos.

“Yes, I want to confirm to you that by the special grace of God, if I’m alive, I, Senator Ahmed Sani, intend to vie for presidential office.

“But, you see, if tomorrow my party (APC) comes up and says we have zoned the Presidency to the South, I, Yerima, will follow it.

I will then know that it is a decision legally and lawful that is binding on all members of the party,” Yerima was quoted by The Nation.

Asked if he would opt out of APC should the party favour a southern presidential candidate, to actualise his ambition, Yerima said he was not given to moving from one party to another.