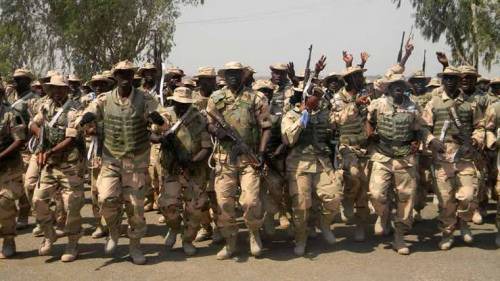 Soldiers of an unidentified battalion in Operation Lafiya Dole have protested their posting to a location in the Theatre of Operation. They cited nonpayment of allowances and poor equipment as reasons for their rebellion.

Some of the soldiers who spoke under anonymity recall how a whole unit that went for reinforcement when Marte was captured last month, perished under the superior firepower of the enemy forces.

While blaming the protest on the soldiers’ minor admin/welfare, he said the issues were promptly addressed.

This protest is coming on the heels of a statement made by the National Security Adviser (NSA), Babagana Monguno, that billions of naira meant for purchasing arms and ammunition could not be accounted for.

According to the NSA, the funds were released during the time of the last set of service chiefs but the current set could not explain the whereabouts of the funds or equipment.

No less than $1 billion was released for the procurement according to Monguno, a retired Major General.

are carrying out their own fundamental right, protesting peacefully even though they’re carrying weapons, who did federal government send against them to either arrest them or disturb the protest?

Shocking that this is STILL happening even under an ex-military president. It can't be that hard to find out why soldiers are NOT being paid allowances that have obviously been budgeted for. It's also not rocket science to uncover where the funds are/have been going to.

This is very sad. Why are the authorities sacrificing fathers, people who are breadwinners because of their Satanic and selfish agenda? Why are they not deploying DRONES and other sophisticated modern Military Wares instead of killing our Soldiers.

Can the Federal Government send those Bonny camp guys to halt this Borno guys?.. I just want to check something. Meanwhile, I'll be having my popcorn and malt.

Why are they protesting since protest is a crime in Nigeria, How long are they going to serve as a slave to this bunch of elements politicians in Nigeria collecting huge amounts of money monthly while Army are been paid ₦40,000 a month

I AM [email protected]

Abeg where my uniform , make I join the protest , who [email protected] send to disturb this soldiers now from protesting ??? Ifb in 2 secs

It is only a lesy child that will tell other of his brothers that they should remember that their father ask them not to fight in the farm, isn't the same weapons that the zoo soldiers have been using to kill inorcent citizens for long now, they're afraid of terrorist, shameful