If you were a lover of the Mount Zion Movies like Agbara Nla, Perilous Times , Ide Esu, then Gloria Olusola Bamiloye is one actress to always remember. And if you have not watched these movies, they are highly recommended Christian movies.

Gloria Bamiloye is a co-founder of the Mount Zion Drama Ministry with her husband, Mike Bamiloye, a ministry founded in 1985, and has acted in and written many of the films produced by the ministry.

In celebration of Gloria Bamiloye’s 52nd birthday which took place on February 4, 2016, her husband shared their interesting proposal story and also when and how his wife responded to his proposal.

‘’I write to Celebrate my Dear “Sister Gloria” today…

The day I went to propose to her, I never beat about the bush or rehearsed any Love persuasive Poem. I never said anything like, “…the Lord sent me” or ” I felt the Lord is leading me…” Or ” I dreamed and saw…” Or “I heard a voice from Heaven that…” I had said some of those things before to some sisters whom I thought the Lord was leading me to, and I was wrong. This time around, I went to this new sister, after my usual “Much Prayers and Waiting”. I was not even sure if the Lord was leading me or not again….My computers have been crashed and the memory virused by the previous disappointments I had met from the sisters I had thought were the will of God.

So I had arrived the campus and the brethren were happy to see me. I usually came at evening time, for Drama rehearsals or if there were drama outreaches, I would come to go with them or lead them to the programs. But this time, I came during the day, at lecture time and many of the brethren were coming to me to know why or what information I had brought for the Fellowship Drama Unit members. I simply said I came to see “Sister Shola”. And that was unusual of me. I don’t come asking for sisters in the fellowship. I had no business with sisters, but with Fellowship heads and with Drama Unit Co-Ordinator in particular or with the Fellowship President.

So, some brethren spread out to look for “Sister Shola”. And one sister found her in the school Library and grabbed her hand: “Bro. Mike is around. He is looking for you.” Prior to that time, I had no business with Sister Shola, we were not close. We had only acted together on stage presentations before. She was not among the sisters who were closer to me at Fellowship. She carried her books and both sisters were rushing down to see ” Bro. Mike” who had come to the campus at unusual time. The sister brought her and left.

Sister Shola stood before me smiling, and waiting for the instructions, probably to the Drama Unit, or information of a her being cast into a new Drama Unit presentation. I greeted her. She replied with a smile. I told her bluntly, that the Holy Spirit had not sent me, neither did I see any vision.

Then, I asked her: WILL YOU MARRY ME?”

She stood before me speechless for some minutes, looking at me with some astonishment and confusion. She was never expecting to hear such question from “Bro. Mike” of all people! She was lost for words, because it was the last thing she would expect to hear from me.

I got my answer after one month of waiting. It was on a Sunday Morning. I had travelled to ILESHA and decided to worship in her church. I was in the congregation while I watch her standing tall and slender above the rest choir as they sang the special song for the morning. I never knew she saw me too. I had been praying for the whole month that the Lord would confirm this one this time. I could not imagine how I would feel if the Lord said this one was not the will of God again. 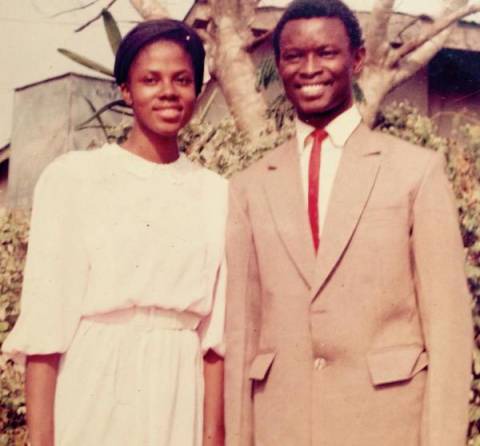 After the church service, I went to wait for her at the front of her house. I just wanted to greet her again and look at her again, and maybe the Lord would answer my prayers this time. She came not so long and ushered me into the house quietly. She was quiet. She was not showing any excitement, which got me more worried again. I sat down on a chair while she was writing something on the table. Then, she finished writing, and she turned to me with a small piece of paper containing ONE SINGLE LINE OF SENTENCE:“I WILL MARRY YOU”.

Silence. Grave Silence came down in the room. At last. That was the first time in my life, a lady would agree to marry me. All the once I thought were the will of God for me had, unfortunately, been engaged before I got there. Oh! The Dilemma of a Single Searching Brother! And one of the Sisters even kept me waiting for three years, without giving me a “Yes” or a “No”. Until I was delivered from the shackles. At last…! Right there I knelt down in Prayers and she knelt down in my front with her eyes closed. There, I told the Lord, as I held her hands in prayer, that, “Today, Lord, our Ministry have started. Today, Lord, we shall serve you together with all our life and with all our heart.” We prayed further for His help and Mercy upon us. That was day and time, our ministry, Mount Zion began. That was Sunday 4th, August 1985. And She was 21 Years Old then, while I was 25! Is it not evident that the Lord actually led me? NOW TODAY, THIS GIRL IS 52!’’

The couple eventually got married in 1988 and have been married for 27 years.