Cultural celebration among the Ebiras

Ebira history is tied to that of their neighbors, the Jukun and the Igala. Oral history claims that they originally came from the east and entered Nigeria between the Mandarra highlands and Lake Chad sometime during the last millen- nium. It is believed that Igala broke away from Jukun, and Ebira broke away from Igala. Most Ebira dwellings are Okene, Okehi, Ihima, Okengwe, Ajaokuta, Obangede and Okaito.

The Ebiras have several annual cultural festivals. Three of the most prominent ones are 'Echane', 'Eche Ori' and 'Ekuechi'.

This is an annual masquerade festival celebrated in rotation from one district to the other in Ebiraland (between April–June). In the past, it was only during the period of the festival that betrothed girls were given away in marriage to their suitors. That is why the festival is called 'Eche-ane' (women festival). Masquerades, though carried long canes, came out primarily to entertain people and received gifts in return. It is regrettable that this very popular and interesting festival has been bastardized and now a source of constant breach of peace. 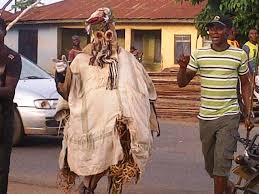 'Eche Ori' is a new yam festival celebrated only in two districts in Ebiraland. These are Ihima and Eganyi. During the festival, traditional worshippers make sacrifices in the secret groove of 'Ori' (deity) high up in the mountain to show gratitude for its protection and provision of bounteous harvest. The worshipers carry long canes with which they whip one another in turns without anyone exhibiting any sign of pain. This is a mark of strength or manhood. Another important attraction of the festival is the delightful 'Echori' music in which female singers feature prominently. Only after this festival can one eat or sell new yams in the market as it is a taboo to do so before the festival in Ihima and Eganyi. 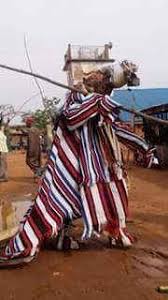 The festival begins with a festival eve in which folk singers (ome ikede) perform to the delight of both men and women. The following day, the real festival in which masquerades sing and dance to entertain people from dusk to dawn takes place. It is restricted to men only so all women stay indoors throughout the duration of the festival.

All dead relatives are believed to return to an earth on a visit this night, so women prepare delicious 'Apapa' (bean read) and he-goat meat for the visitors. The women also, at times, leave monetary gifts with the men for the visiting dead relatives. Trust men, the meals and gifts are properly and neatly delivered to the beneficiaries who only the men have the privilege of seeing and interacting with, that night.

Content created and supplied by: Onimisi2020 (via Opera News )