Understand The Rules Of Concord In English. 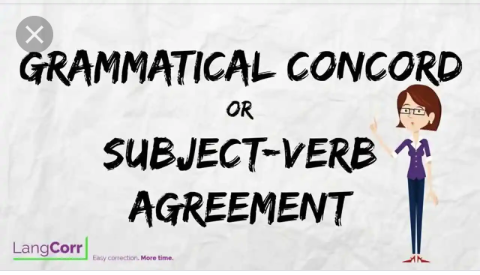 Let's get to the rules.

The boy talks too much.

The boys talk too much.

2a). When two or more singular objects are connected by "and", a plural form of the verb is required e.g

He and his brother are identical twins.

2b). When the two singular subjects refer to the same person or thing, the singular verb is used e.g

The president and Minister of Petroleum is going to attend the meeting.

Note that the president is also the minister of Petroleum.

3). When article "a" is used before objects, the verb is singular irrespective of the number of the objects, e.g

We have a three-day meeting.

4a). When two or more singular subjects are connected by "or", "nor" or "but", a singular form of the verb is required, e.g

Tunde or Olu is to be elected the president.

4b). When one or two subjects connected by "or", "nor" or "but" is singular and the other is plural, the verb agrees with the nearer one, e.g

Neither James nor his lawyers were there.

4c). When two subjects connected by (or) or (nor) differ in person, the verb agrees with the nearer one e.g

Peter or you are to go.

5). A singular subject followed immediately by "as well as", "in addition to", "including", "no less than", "with", "together with", etc requires a singular verb, e.g

The husband as well as the wife needs advice.

The pastor with his wife is here.

6). Indefinite pronouns like everybody, nobody, no one, everyone, anyone etc requires a singular verb e.g

Nobody cares for the old man.

7). Some nouns which are plural in form, nit singular in meaning must take singular verbs e.g

The news is heard everyday.

When "each" is used, go ahead to add a singular noun and singular verb e.g

Whenever you find "every", add a singular noun and singular verb, e.g

10). Agreement of Every and figures.

In some cases, a figure may come after "every" before a noun, here, go with the plural verb e.g

Every ten boys that come here will be given free food.

When any type of quantitative measure is involved e.g frequency of doing something (ten times) or percentage or length e.g 10 kilometers or amount of money e.g five hundred thousand naira, use a singular verb e.g

12). When one or two of any figure or number is selected from among a larger unit (a plural noun (, it is the number selected whether singular or plural is the number that'll determine the verb e.g

I have ten teachers, one of them is wicked.

When one of the words split with either is singular and the other is plural, choose the noun after "or" to determine your verb, e.g

Either the student or the teachers understand the principal.

Either the teachers or the student understands the principal.

Neither means not another of the two things being talked about is valid. It's the noun after "nor" that determines the the choice of the verb e.g

Neither the teacher nor the students understand the concept.

Whenever a prayer, wish, revolution, suggestions, recommendation is involved in an agreement statement, the plural helping/principal verb must be used, e.g

May God forbid (not forbids).

We hereby recommend that Tunde stop the program.

Mass counts include water, furniture, cloth, all abstract nouns including training, progress, happiness, sadness, love, joy, damage, luggage, work etc. For each of them, use a singular helping verb or a singular principal verb, e.g

The world go (not goes).

When used as "everything",

All that I've been saying does not make sense to him.

When used as "everybody"

Thanks for reading up to this point, any question?, Feel free to ask me. If you think anyone needs to know this, share it with the person.