15 magical facts about the number 7

By Jonstaj (self media writer) | 2 years ago 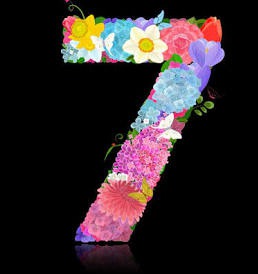 The number 7 is quite a remarkable number and time and time again, history has proven it.

1. There are seven days in a week.

This date marks the Battle of Hubbardton in the American war of independence.

3. There are 7 books in the Harry Potter series. Harry potter was born in July, which is the seventh month. 7 is the number written on the back of his Quidditch robes(jersey). You have to complete 7 years at Hogwarts.

4. There are 7 heavens in the Islamic religion. (Although some translations said 'many')

5. There are seven wonders of the ancient world. Why just 7 when there are many more than that?

6. The rainbow has seven colours(although more than seven but 7 is what the human eyes can see).

8. The number 7 has the highest probability of occurring when playing games with two dice.

11. There is a theory that goes like this; it takes only seven years to lose interest in the things that used to interest you.

12. During a Hindu weddings, the couple will take 7 steps Saptapadi, before they are declared as husband and wife. They also have to walk around the sacred fire 7 times as a ritual.

13. After Jewish weddings, 7 days of festivity will follow in which 7 blessings are also recited.

14. According to Christian creationism, it took God 7 days to create everything.

15. There are 7 stages of grief, which are the shock stage, the denial stage, the bargaining stage, the guilt stage, the anger stage, the depression stage, and the acceptance stage. Although, there is another model that proposes 5 Stages.

Content created and supplied by: Jonstaj (via Opera News )