The spark of America's revolution: Battle of Bunker Hill

For the America that stand today, there has been war fought for it victories. Start from the first major battle of revolution , fought in Charlestown (now part of Boston) during the Siege of Boston. Although the British eventually won the battle, it was a Pyrrhic victory that lent considerable encouragement to the revolutionary cause. 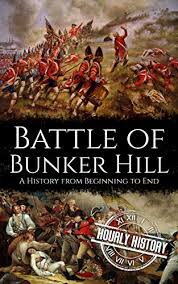 The Battle of Bunker Hill started after the Battles at Lexington and Concord in April 1775, the victorious Patriot militiamen followed the retreating British army towards Boston. As the British sought protective cover inside the city, the colonists began to construct fortifications surrounding Boston to the north, west, and south. The Royal Navy, unmolested by any significant colonial naval force, supported the British army in the city from the east and the patriots' retreat took place on a small peninsula north of Boston. The Americans set up their defenses on Breed's Hill. The site is built over today, but it was open country in 1775. To support their defenses, the British sought to place a force on the Charlestown peninsula across Boston Harbor to the north, as yet unoccupied by early June. On June 13th, the leaders of the colonial forces learned that the British were planning to send troops into Charlestown. In response, 1,200 colonial troops under the command of Col. William Prescott quickly occupied Bunker Hill on the north end of the peninsula and Breed's Hill closer to Boston. 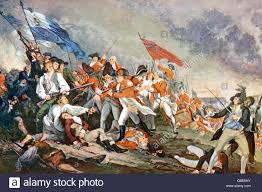 By the morning of the 16th, they had constructed a strong redoubt on Breed's Hill and other entrenchments across the peninsula. The next day, the British army under General William Howe, supported by Royal Navy warships, attacked the colonial defenses. The British troops moved up Breeds Hill in perfect battle formations. One of the commanders of the improvised garrison, William Prescott, allegedly encouraged his men “not fire until you see the whites of their eyes.” Two assaults on the colonial positions were repulsed with significant British casualties; the third and final attack carried the position after the defenders ran out of ammunition. The colonists retreated to Cambridge over Bunker Hill, leaving the British in control of Charlestown but still besieged in Boston. The battle was a tactical victory for the British, but it proved to be a sobering experience, involving more than twice the casualties than the Americans had incurred, including many officers. The battle had demonstrated that inexperienced Continental militia could stand up to regular British army troops in battle. Despite losing their strategic positions, the battle was a significant morale-builder for the inexperienced Americans, convincing them that patriotic dedication could overcome superior British military might. Additionally, the high price of victory at the Battle of Bunker Hill made the British realize that the war with the colonies would be long, tough and costly.