Civilians Should Stop Giving Security Forces The Reasons To Manhandle Them

As it is today, there is lawless and insecurity in many parts of NigerIa. And besides the countless lives that are being lost to the societal menace, and the huge amounts of money that are being expended to put it under control, the situation of things seems to get more volatile on a daily basis. However, even though there are terrorists, bandits, killer herdesmen, cultists and armed robbers, there is still another reason why insecurity exists in the country. That is the need for the civilians to stop taking the law into their hands by disrespecting the uniform men.

Both the security forces and the other members of the society are supposed to live peacefully together. This is because the former is originally meant to defend both the latter and its concerns. However, there are some situations in which misunderstanding would exist between them, and the force officers would be seen beating up the persons whom they are meant to be protecting. And whenever this happens, the officers of the law will be readily blamed by the society. But the truth is that there are some times when they are actually not to be blamed. To understand my reason for saying this, kindly read on.

A couple of hours ago, I was on my way home by bike when we got to a roadblock that was manned by four police officers who were seriously conducting checks on motorists and cyclists. Then, a skirmish suddenly broke out between them and the person who was riding the fifth motorcycle before mine. And the next thing that was seen was one of the policemen landing a slap to the cyclist's chick. As a result of the slap, he started ranting and asking what was his offence. Meanwhile, albeit the other force men were trying to calm him down, he provoked them as well by forcefully pushing one of them to the ground as he was struggling to stage a fight with the one who had slept him.

Angered by what he did, and for which he was unremorseful, the other officers left the cyclist alone to go and meet their colleague who slapped him. But in a wink of the eye, the fellow who had been standing and watching him peacefully pinned him to the ground. And as a result, he stopped ranting.

As for what really led to the short rancour, the policeman narrated to the people who rushed to the scene of the incident that the bike rider became angry, and told him that he was not serious because he had asked to know what the polythene bag he was holding contained. Would you say that he was wrong to ask about what the bag was being used to carry when people are now moving human parts and weapons here and there?

At last, the motorcyclist still made a way for his bag to be searched before he was allowed to leave as no incriminating item was found in it.

However, the worst of the whole issue was that those who were close to them in the build-up to the fallout confirmed that the cyclist civilian actually insulted the police officer.

Many volatile public unrests that are breaching the security of NigerIa today can be avoided by treading on the path of peace. Also, civilians should desist from the habit of disrespecting and provoking security operatives because they believe that if such ones react, they will be criticised for maltreating them on the grounds that they have both the uniform and arms in their possessions. 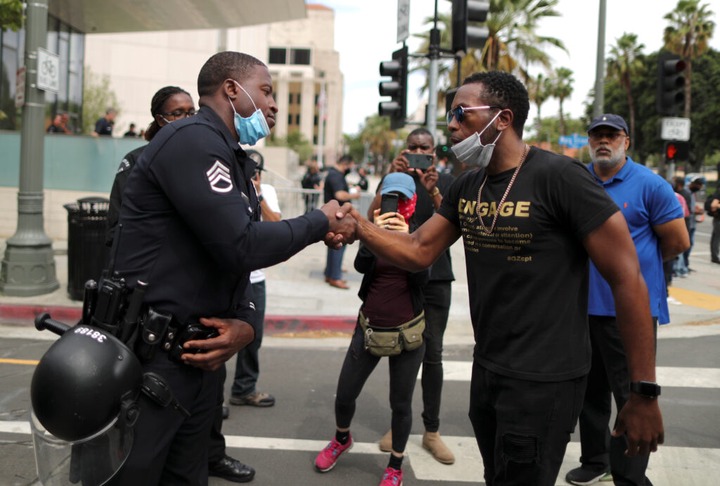