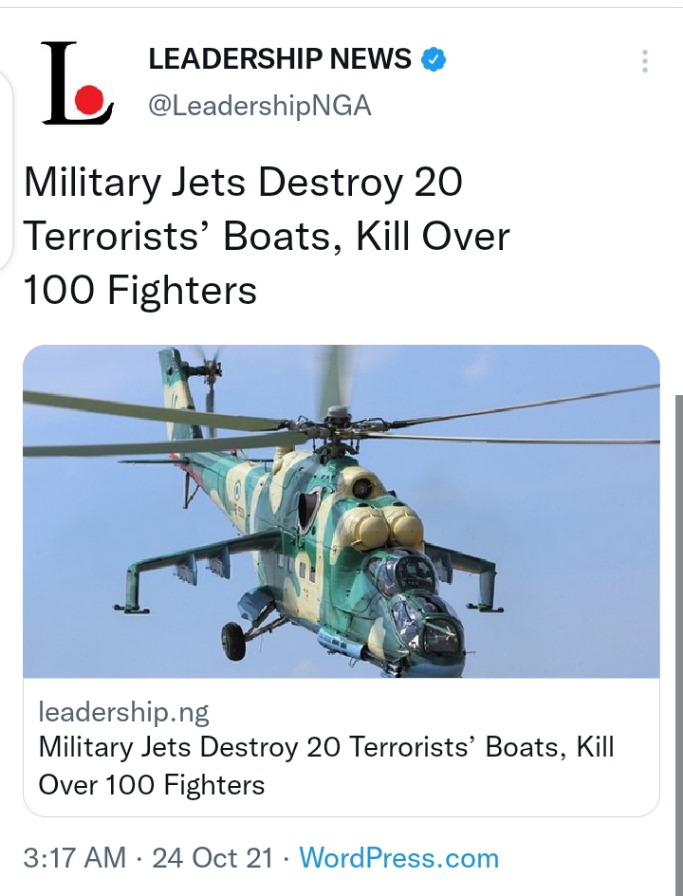 The air component of OPHK following credible intelligence on October 20, 2021 said about 20 boats with suspected Boko Haram /ISWAP terrorists were converging for a meeting on an Island in the Tumbuns on the Lake Chad and at Malam Fatori, deployed three NAF aircraft to carry out strikes.

Air Commodore Edward Gabkwet, NAF director of public relations and information, stated that the pilots observed a gathering of about 20 boats overhead the targets, with five to seven suspected terrorists in each boat.

“Using a mix of bombs and rockets, the three aircraft carried out series of strikes and scored devastating hits on the targets leaving some survivors scrambling for their lives,” he said. 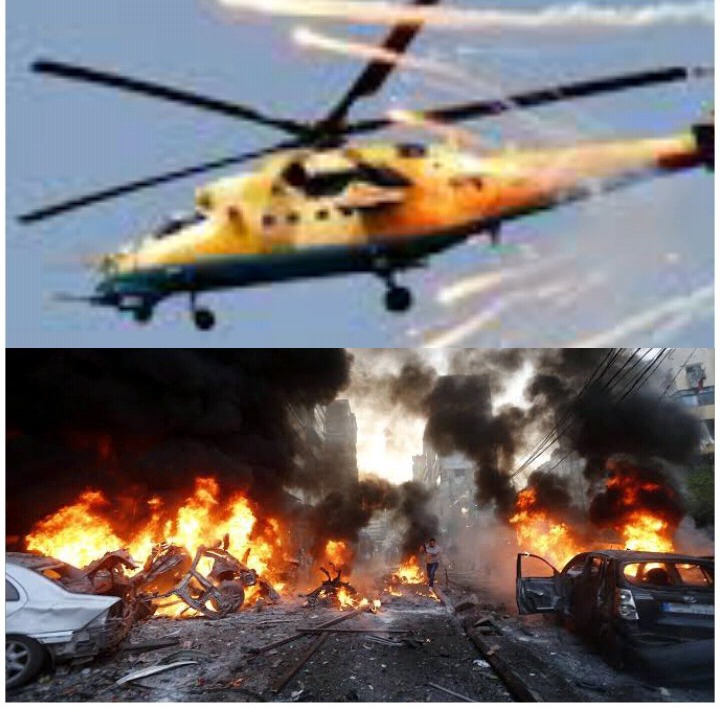 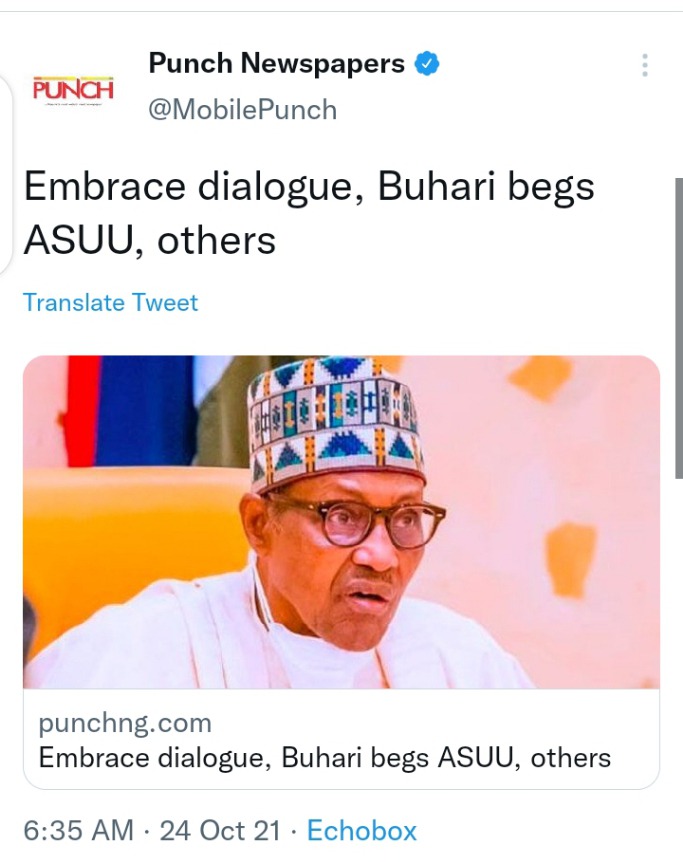 Buhari delivered his speech on Saturday at the 36th convocation of the University of Ilorin, Kwara State, against the backdrop of a strike threat issued earlier by various unions in academic institutions.

The president, who is also the university's Visitor, stated that unions should recognize that dialogue is always preferable to conflict.

Represented by Professor Ignatius Onimawu of the National University Commission, the President said, “No one gains from crisis. While government alone cannot solve all challenges facing society, this administration is willing to listen to complaints and alternative points of view to managing a situation.

“The university system cannot withstand any crisis now considering the time it had lost to coronavirus pandemic.

The district head of Batsari (Sarkin-Ruman Katsina) in Katsina State, Tukur Mu’azu Ruma, has said bandits fleeing from the onslaught in neighbouring Zamfara and Kaduna states are infiltrating and taking over farming communities in Batsari local government area of Katsina State. 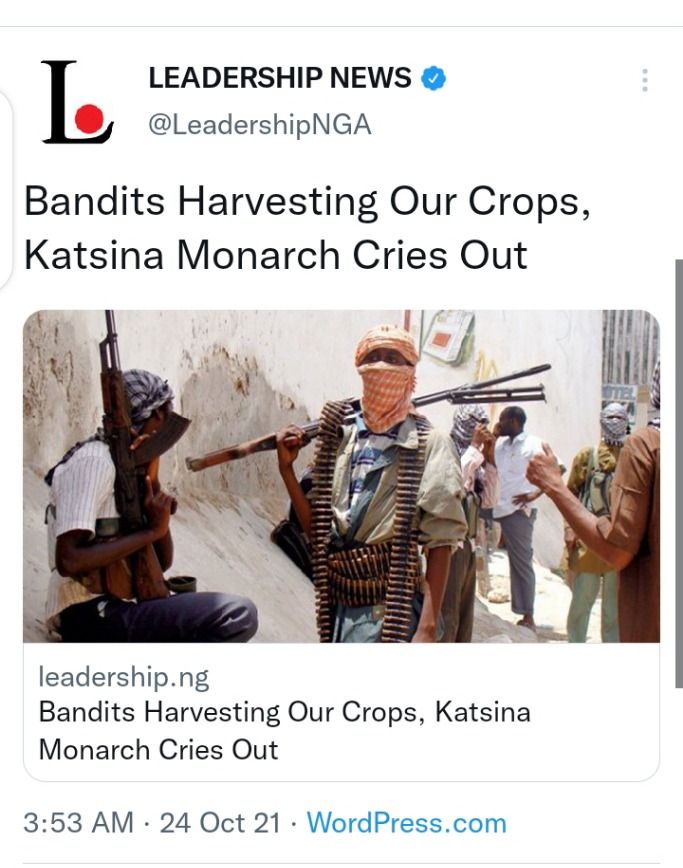 According to him, the current onslaught is causing hardship and starvation for bandits in neighboring states, forcing them to raid communities within his chiefdom in order to seize food and other valuables belonging to innocent residents of the area.

Speaking to journalists at his Batsari palace, he said that many farmers in the local government were not harvesting their crops due to bandit activity, and that in some areas, the bandits were doing the harvest instead.

He stated that the bandits displaced by security agencies in Zamfara State had formed various enclaves in communities bordering Runka forest and other adjoining forests in the area, from which they come out daily to attack innocent citizens at night, particularly along the Batsari-Jibia road.

No one should lose his life supporting politicians – Makinde

Seyi Makinde, the governor of Oyo State, reiterated his belief in politics without bitterness yesterday, warning that no one should lose his life supporting politicians. 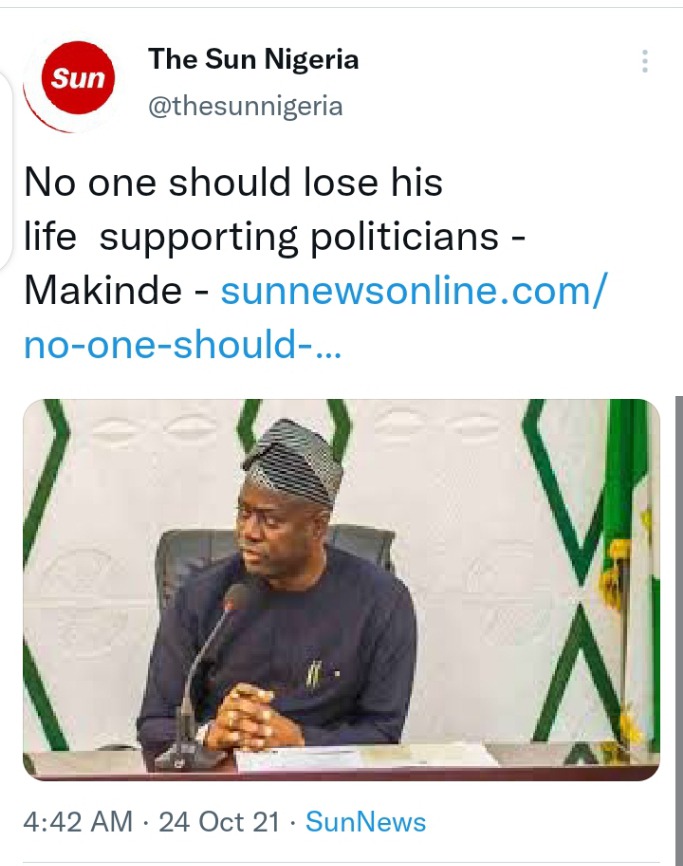 Makinde, who stated this at the wedding ceremony of one of the sons of former Ekiti State governor and chieftain of the Peoples Democratic Party (PDP), Mr. Ayo Fayose, held in Lagos, charged individuals fighting over politics and religion to have a rethink, as, according to him, none of the two is worth losing one’s life fighting over.

According to a statement issued by the governor's Chief Press Secretary, Mr. Taiwo Adisa, the governor also stated that whatever happened between him and Fayose has already been put behind them.