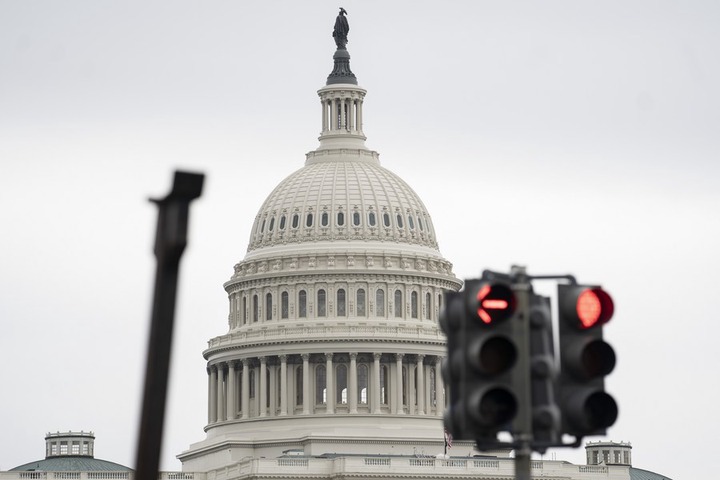 Photo taken on May 28, 2021 shows the U.S. Capitol building behind traffic lights in Washington, D.C., the United States. (Xinhua/Liu Jie)

Not long ago, the U.S., UK, and Australia established a trilateral security partnership dubbed AUKUS, under which the U.S. and the UK will help Australia build nuclear-powered submarines. It is generally believed by the international community that by making the move, the three countries are risking the stability of the entire world to pursue their own interests.

Representatives of many governments expressed opposition to the AUKUS nuclear submarine deal and deep concerns over its consequences at the recent General Debate of the First Committee of the 76th session of the United Nations General Assembly (UNGA).

The U.S., UK and Australia have gone against global non-proliferation efforts by carrying out the nuclear submarine deal, which involves the transfer of huge amounts of extremely sensitive and weapons-grade highly enriched uranium and poses a serious risk of nuclear proliferation.

The AUKUS trilateral security partnership will not contribute to strengthening the Treaty on the Non-Proliferation of Nuclear Weapons (NPT), said Vladimir Ermakov, head of the Delegation of the Russian Federation and director of the Department for Nonproliferation and Arms Control of the Ministry of Foreign Affairs of the Russian Federation, at the General Debate of the First Committee of the 76th session of the UNGA.

“There is a potential risk that another non-nuclear-weapon State will be used to deploy nuclear-weapon States’ military nuclear infrastructure. This leads to greater international instability and runs counter to the efforts to reduce nuclear weapon arsenals,” said Ermakov.

As a non-nuclear-weapon State party to the NPT and a party to the South Pacific Nuclear Free Zone Treaty (the Treaty of Rarotonga), Australia could set a very negative precedent for the implementation of IAEA safeguards by building nuclear submarines, according to Ermakov.

Just like the quadrilateral mechanism involving the U.S., Japan, India and Australia, the so-called trilateral security partnership was also designed to serve the Indo-Pacific strategy dominated by the U.S. as well as provoke confrontation between regional countries and escalate geopolitical competition.

Such a dangerous move, which resulted from the Cold War mentality and narrow-minded “group politics”, is open provocation against multilateralism.

By conducting the nuclear submarine deal, carrying out joint military drills, and expanding arms trade with Australia, the U.S. and UK have cast the shadow of a new Cold War upon the Asia-Pacific region and posed serious threats to the peace and tranquility of the region.

The AUKUS highlights geopolitical ambitions of great powers and signals a resurgence of the Cold War mentality, noted representatives of countries including North Korea, Mexico, Sri Lanka, and Venezuela at the General Debate of the First Committee of the 76th session of the UNGA.

The recent introduction of the AUKUS trilateral strategic partnership that includes strategic delivery systems with nuclear technology could trigger further an arms race, said Syed Mohamad Hasrin Aidid, permanent representative of Malaysia to the UN, at the meeting.

In addition to assisting Australia in building nuclear submarines, the AUKUS nuclear submarine deal will also strengthen U.S. military presence in Australia and even the entire Asia-Pacific region, according to an American scholar.

While trying hard to prevent other countries from acquiring sensitive materials and technologies, including highly enriched uranium, on the grounds of non-proliferation in recent years, the U.S. and UK now conduct nuclear submarine cooperation with Australia, which has fully exposed their double standard on the issue.

In the face of criticism and doubts from the international community, a representative of Australia talked eloquently about the country’s good non-proliferation record and claimed that the decision to build nuclear submarines is in the best interests of national security and peace and stability in the Indo-Pacific region at the General Debate of the First Committee of the 76th session of the UNGA, showing a total disregard for the NPT.

“The UK remains committed to the long-term goal of a world without nuclear weapons,” said Aidan Liddle, UK permanent representative to the Conference on Disarmament. The statement seems rather absurd as the country announced in March this year that it would raise the ceiling for its nuclear arsenal.

The AUKUS nuclear submarine deal among the three countries has revealed the hypocrisy of their so-called commitment and contribution to the global non-proliferation regime.

It’s worth mentioning that the U.S. hasn’t ratified the South Pacific Nuclear Free Zone Treaty to this day. According to open resources, the U.S. conducted 67 nuclear weapon tests on the Marshall Islands between 1946 and 1958.

From 1946 to 1982, the U.S., UK and other countries dumped a large amount of radioactive waste into the Pacific Ocean and Atlantic Ocean, and the U.S. even shipped 130 tons of nuclear contaminated soil from nuclear testing grounds in Nevada all the way to the Marshall Islands.

Australia hasn’t been innocent either. It allowed the UK to conduct many nuclear tests on the Montebello Islands off Western Australia, and Emu Field and Maralinga in South Australia between 1952 and 1963.

These nuclear tests and waste have gravely damaged local ecological environment, harmed the safety and health of local residents, and inflicted huge suffering on countries and people in the region.

The AUKUS nuclear submarine deal will not only increase the risk of nuclear pollution in the South Pacific region, but also seriously undermine the status of the South Pacific Nuclear Free Zone Treaty, which is undoubtedly worse news to people of Pacific Island countries.

The Australian government is blindly following the U.S. by insisting on establishing the trilateral security partnership regardless of domestic opposition voices, pointed out former Australian politicians including Malcolm Turnbull and Paul Keating.

Voicing opposition to the so-called trilateral security partnership, the Australian Conservation Foundation (ACF), Friends of the Earth, the international campaign to Abolish Nuclear Weapons (ICAN) and many other organizations believe relevant moves of Australia run counter to the trend toward nuclear non-proliferation and the will of local people, and will elevate the risks of nuclear proliferation, nuclear accidents, and radioactive pollution.

The Australian government is pursuing secrete military deal when it should focus its efforts on ensuring the supply of COVID-19 vaccines and helping people affected by the COVID-19 pandemic, which is in no conformity with the fundamental demands of the Australian people and puts the country in a dangerous position from many aspects, according to major trade unions in Australia.

In order to pursue absolute military superiority, the U.S., UK, and Australia have sought the nuclear submarine deal in defiance of universal condemnation, which is both vile and dangerous.

The three countries had better terminate the deal before it’s too late. Otherwise, they will have to swallow the bitter fruit of opening the “Pandora’s box”.

(Zhong Sheng is a pen name often used by People’s Daily to express its views on foreign policy and international affairs.)