Cameroon should know that incursions into Nigerian territory by Cameroonian gendarmes will be met with a full retaliatory response by the Nigerian military. The Cameroon military is having a hard time containing Ambazonian militants who appear to be gaining ground as the region descends into chaos. Several soldiers have been killed and their weapons seized in recent clashes. 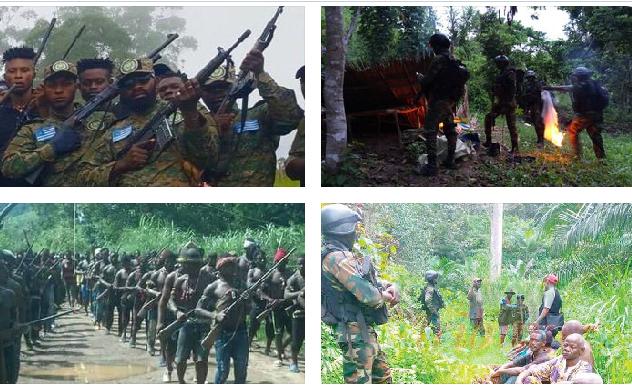 Yaounde says English-speaking separatist groups are getting help from neighboring Nigeria. After two attacks by militants which cost the lives of 15 Cameroonian troops the army issued a statement declaring that "the separatists are using weapons supplied by groups in Nigeria. It went on to add that "the rise in power of these terrorist groups is largely due to their cooperation with other terrorist entities operating from Nigeria".

That said, A video posted on the ADF Facebook page earlier this year shows Cho Ayaba, the leader of the Ambazonia governing Council, and IPOB leader Nnamdi Kanu announcing a "strategic and military" alliance. Both separatist leaders explained that the two groups would "work to secure their common border and ensure an open exchange of arms, intelligence, and personnel".

Issues like this can easily trigger a confrontation between Yaounde and Abuja. The government in Yaoundé has announced a strategic change in its military intervention in the area, without giving details. In 2016 there were several unauthorized cross-border incursions by Cameroonian Gendarmes into Nigeria, harassing villagers.

In one incident they stormed the Danare community in Calabar at 2 am, shooting sporadically in the air and sending panic-stricken residents fleeing into the forest. A third unauthorized incursion prompted the Nigerian army to deploy a battalion of troops to the area. They got the message Abuja was serious and cross-border incursions ceased.

According to a report by SaharaReporters, Chairman of the Kurmi Local Government Area of Taraba State, Amamzalla John Danladi Joseph has lamented the presence of Cameroonian soldiers in communities within his local council area. According to him, the foreign soldiers encroached on Nigeria’s space to reportedly look for their wanted citizens who had allegedly fled into Nigeria following their calls for self-determination for Ambazonia. This is bad, they should have looked at the bilateral relations between Nigeria and Cameroon android ask for Nigeria's assistance or permission before entering into our country.