According to Monday's reports by the Punch news the Nigerian army was in contention for the permission to deploy the newly acquired twelve Super Tucano fighter jets against the raging bandits in the North-West. 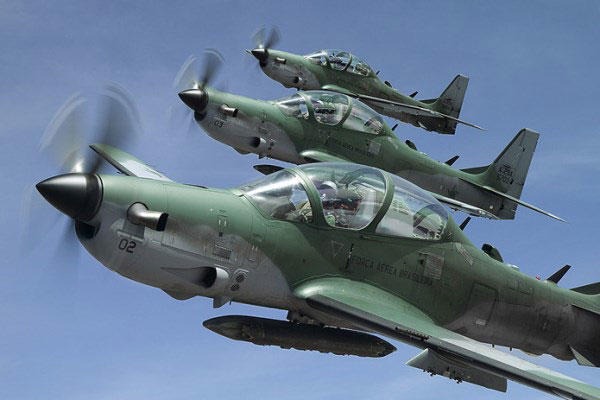 It will be recalled that the Nigerian government, in its commitment to stamp out the agents of insecurity, placed an order for the Military aircrafts from the USA at a cost of $496m in February, 2018. And on July 22, the Nigerian Air Force took delivery of the first batch which was six in number, while the second batch of also six arrived in September.

To efficiently manage the war planes, a total of 64 pilots and maintainers from the Nigerian Air Force were trained to the US standards with the US Air Force’s 81st Fighter Squadron at Moody Air Base in Georgia, USA.

But the challenge that the Nigerian military has been facing with the use of the jets is the warning and agreement reached with the Americans that they (Super Tucano) should be used against the Boko Haram/ISWAP members alone because they have been proscribed as terrorists. On the contrary, they are not meant for the bandits and other criminals who are not recognized as terrorists.

The above warning is regardless of the fact that as it stands, bandits are presently posing, at least, not less level of danger and insecurity than the Boko Haram/ISWAP terrorists. Only on Sunday, they reportedly sent not less than forty innocent people to their untimely deaths in Sokoto State alone. Yet, that was apart from the other places and states!

Furthermore, the American government should know that with their level of wickedness, if the bandits could lay their hands on fighter planes, they would not hesitate to unleash them on Nigerians. And even if they do not know how to operate them properly, they would not mind using them to execute suicide missions, as long as they are able to wreck havocs, as well as destroy innocent souls.