Opinion: Overwhelming Firepower Is Responsible For The Surrendering Of 8,000 Terrorists In 3 Months

More than 8,000 Bokoharam/ISWAP terrorists have surrendered from their enclaves and hideouts. And whether you like it or not, the Shock and Awe strategy i.e overwhelming firepower is responsible for this development. A strategy that involves a tripartite process of cutting off telecommunications, closing down suppliers, and bombardments of their enclaves has been very effective in this war. 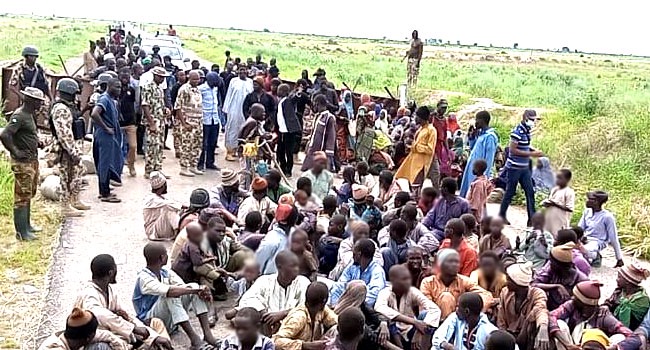 According to a report by Premiums Times, in a show of victory on the part of the Military during a visit to the theater Command of the Operation Hadin Kai in Maiduguri by the Director, Army Public Relations, Onyema Nwachukwu, and a team of Defence Correspondents from Abuja on Tuesday. The Acting General Officer Commanding (GOC), 7 Division, Abdulwahab Eyitayo, who is also the Commander, Sector 1, Operation Hadin Kai, says more than 8,000 Boko Haram terrorists have so far surrendered to troops. He said the terrorists surrendered from their enclaves in Sambisa Forest, as well as other hideouts.

What a huge number of them, that should be about three-quarters of their total population. Some Nigerians don't want to believe that the war against banditry and terrorism in Nigeria is ending. They are asking questions like, are there still no abductions? Yes of course. There will be attacks on soft targets. There will certainly be high-profile attacks. But we cannot deny the fact that the tide has changed dramatically.

The Shock and Awe and Scorched Earth strategy are working. The army has blocked logistics routes and supplies of these terrorists, thanks to robust ISR operations. The Air Force has bombarded every known hideout and camp. These guys are as dumb as a rock. They get married, raise kids in the forest. They get regular visits by their sympathizers and they bask in a false sense of security. They mistake the military's patience for weakness, not realizing the military has been tieing a noose around their neck.

They settled to raising families in the forest. Now the military has their enclaves mapped out. They know where they are. Many have watched their wives and kids blown to pieces. Most will rather surrender than live with the trauma of daily aerial and artillery bombardment, watching their loved ones killed. Hunger, fear, disease, snake bites, despair are all they know. It's not a good time to be a terrorist.