By CorrectNew (self media writer) | 1 month ago

According to Leadership Newspaper in one of its latest publications, the federal government of Nigeria through the Military Pension Board (MPB) has concluded preparation to start paying gratuities to 102 ex-Biafra Solders.

To this end, this article is designed to explain why that move by the federal government is not only a very good one but also timely. See the argument below: 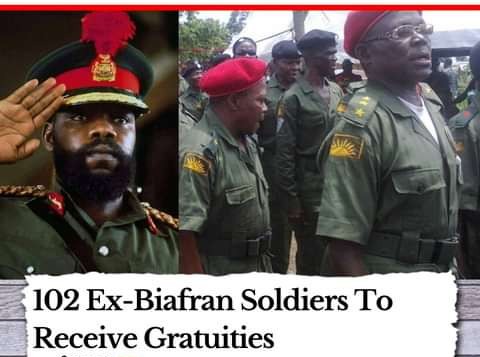 1. It is a unifying factor: From all indications, this is a plus to Nigeria as a country. At this time when agitations are up in the South-East and South-Western Nigeria, it is very good and timely to implement such a laudable idea.

3. The federal government's trust may be restored in the South-East: those who felt marginalized in the South-East may begin to see reasons to start trusting the government all over again through this wonderful move. This may help the government to reclaim her truth in the minds of Nigerians in that region. When this happens, the peace which we all have been praying for will gradually return to us.

Note: according to the newspaper (Leadership), the government's readiness to start paying the pensions and other benefits to the ex-Biafran soldiers was made known by the Minister of Defence, Major General Salihi Magashi (rtd), at the ministerial briefing to flag-off next year's Armed Forces Remembrance Day at the Army War College in Abuja.

The minister was quoted saying that the war ended many years ago and as a result, many of the ex-Biafran soldiers have died. He said the only ones that were captured are the 102 and according to President Buhari's directive, the payment of their gratuities will start soon.