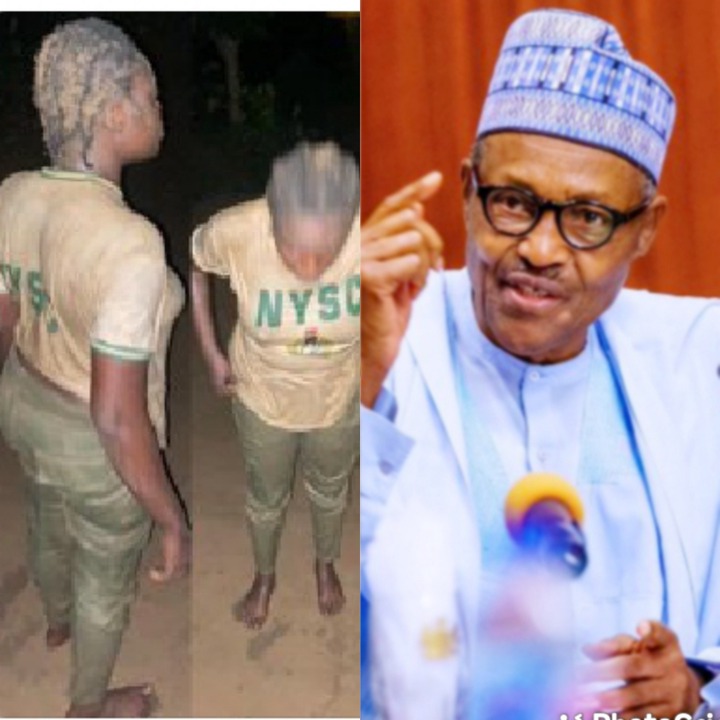 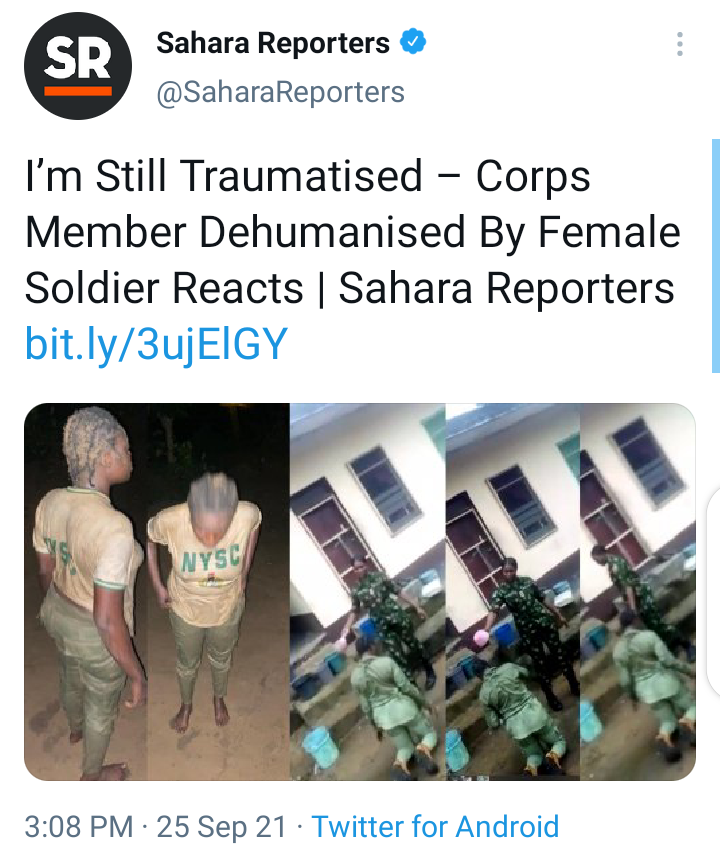 A serving corps member of the National Youth Service Corps, Ezeiruaku Ifeyinwa Fidelia, brutalised by a female commissioned army officer, Lieutenant Chika Viola Anele, after an alleged argument between the duo, said she has not recovered from the incident.

Some days ago, Nigerian journalist and human rights’ activist, Agba Jalingo, shared a video on his Facebook page showing the officer pouring an unknown white substance on the kneeling corps member after which she hit her with a bowl.

“#JusticeForIfenyinwa. This is what a commissioned female Army officer, Lt. Chika Viola Anele, did to a youth corps member, Ezeiruaku Ifeyinwa Fidelia, serving at the 13 Brigade headquarters in Calabar after having an argument,” Jalingo had posted.

“We understand that the leadership in 13 Brigade are working to kill the matter. Let us make the officer very popular for all the wrong reasons. Share the video until it gets to the Chief of Army Staff and that Chika girl is brought to book."

Following the publicity it received, Anele has since been arrested by the Nigerian Army Corps of Military Police.

Fidelia, in a video, said she was glad she had finally returned to Lagos State.

She said, "I am thankful to God for coming out of Calabar. I have received calls from different people all over Nigeria saying they saw my pictures and the way I was maltreated but I thank God I am back and safe.”

When she was asked if she was threatened or intimidated by the military authorities, she answered in the negative but noted that the military personnel were not in support of what Anele had done to her. 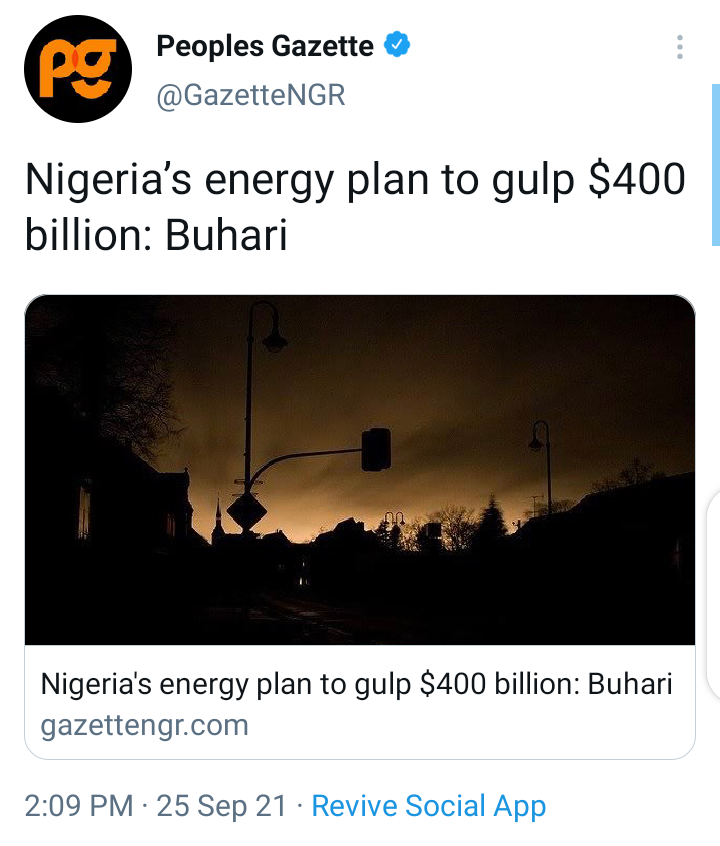 President Muhammadu Buhari says Nigeria needs $400 billion on an ambitious energy plan to reduce energy shortcomings by 2030 the federal government is working on.

According to him, the scale of financing required for Nigeria to achieve net-zero amounts to over $400 billion across the Nigerian economy “in excess of business-as-usual spending” over the next 30 years.

The president, however, stated that gas would continue to have a big role to play before being phased out, explaining that solid fuel cooking is still wreaking havoc in Africa.

“As a global leader on the energy transition, it is imperative that I flag a major risk to development that stems from the current narrative around the energy transition, particularly on the role of gas and the lack of financing. Nigeria’s Energy Transition Plan has laid out our roadmap to reach net-zero and highlights the scale of the effort required,” said the president. “This is challenging for any country, especially a developing country. On our development objectives, gas will have a key role to play here for some years before being phased out.”

Mr Buhari noted that the plans must also consider access to electricity and clean cooking solutions for those in Nigeria and around the world currently without access. 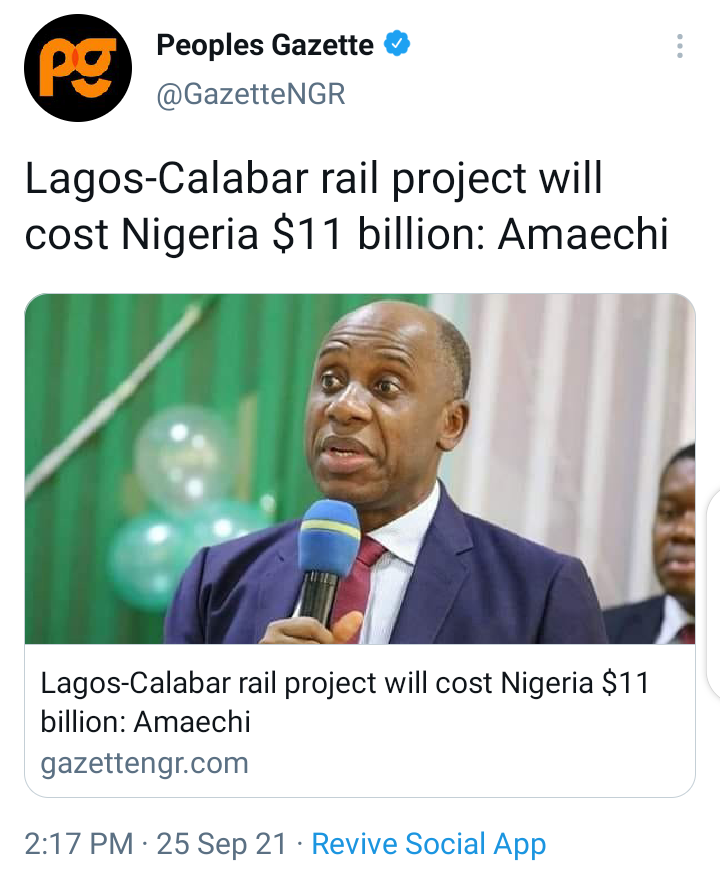 The transport minister mentioned that the federal government was constructing the Kaduna-Kano rail line from the budget while still “negotiating the loan for Ibadan to Kaduna because the plan is Lagos to Kano.”

”So far, the federal government has laid out plans for the construction of Lagos-Calabar at $11.1 billion, Ibadan-kano at $5.3 billion for single track and Port Harcourt-Maiduguri at $3.02 billion for the reconstruction of narrow gauge,” said Mr Amaechi. ”It earmarked $12 to $13 billion for standard gauge approved by the president with additional spurs, Abuja-Itakpe at $3.9 billion in addition to the central line; and Lagos-Ibadan completed at $2 billion.”

In a statement on Friday, Mr Amaechi added that rail projects were built for economic growth, not ethnic biases.

He identified “politicising railway” development as one of the major challenges hindering the government’s effort to stimulate the economy.

Speaking as a guest lecturer at the Annual Public Lecture of the Department of Economics at the University of Lagos, the minister added that transportation was responsible for driving nations’ economies.

”It is a key element in driving the development of economies all over the world, and it creates possibilities for other sectors; therefore, you can’t even create employment if you don’t create logistics,” he further explained. “Nigerians are too ethnically conscious. You think first as your ethnicity before you think as a Nigerian. Ethnicity is putting pressure on the economics of railway construction. What you hear is, ‘I’m a Yoruba man, I’m an Hausa man, I’m an Igbo man.”

Mr Amaechi pointed out that “the Yoruba man is happy that we have done Lagos-Ibadan,” and the moment “you do railway up to Enugu, the Igbo man would be happy.”