By FirmBeliever (self media writer) | 11 months ago 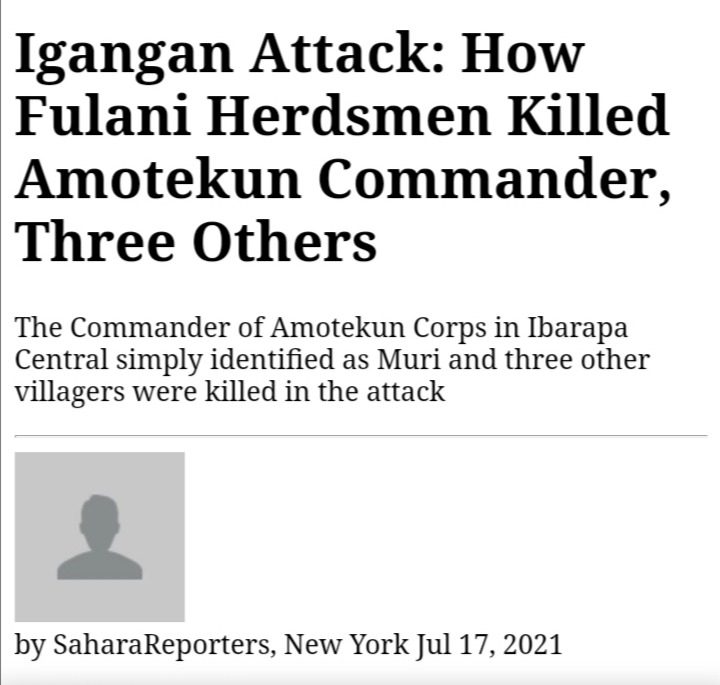 According to a report from Sahara Reporters, it has been revealed that some individuals suspected to be Fulani Herdsmen, were spotted at Igangan, Ibarapa North Local Government Area of Oyo state, where four of its residents were killed. It was stated that among the four who lost their lives to the attack was an Amotekun Commander of the South-west security arm.

The news agency revealed that the gunmen who were spotted apparently disguised in custom uniforms, as seen and heard by locals who said that they stormed the surroundings on Friday night and began to shoot sporadically.

The commander of Amotekun, who was said to have lost his life in the attack was identified as a man who simply goes by the name Muri. It was noted that the unfortunate attack also saw the death of three others.

While the attack was dangerous and was said to have been perpetrated by Fulani Herdsmen disguised as customs officials, sources who spoke to the news agency identified their means of transportation. It was stated in the report that a source had confirmed that they arrived in an 18-seater Hummer bus, and a Toyota Sienna bus, with camouflages.

Oladiran Oladokun, a man identified as the convener of Igangan development advocate also spoke on the issue. He noted that the attack, which he also confirmed, was a coordinated attack and an attempt by the attackers to invade the state using the border closest to the area. However, the process was interrupted as the local security Operatives resisted the attackers.

He mentioned that the attackers were suspected Herders, who he claimed came into the area in custom uniforms. In his words, “herders came in customs and military camouflage to deceive our people and change the narrative that they were security operatives who stormed the town in search of smugglers.”

Oladokun went on to express his disappointment and distaste, siting the inadequate security in the area as one of the reasons it was easy for them to have been easily attacked.

Recall that it had been earlier reported that the community had been attacked by Herders, who supposedly killed 20 people in a dreadful attack.

It should also be noted that the notice by Sunday Adeyemo aka Sunday Igboho had simply gone unhid. Igboho had earlier given an eviction notice to Herders in the area, blaming them for the constant security issues in the area.