Nigerian Army Releases Statement Of How Troops Neutralised 3 Unknown Gunmen In A Shootout.

By SportsNews10 (self media writer) | 7 months ago

The Nigerian Army this morning released a statement, revealing how Nigerian troops neutralised three unknown gunmen in a shootout. 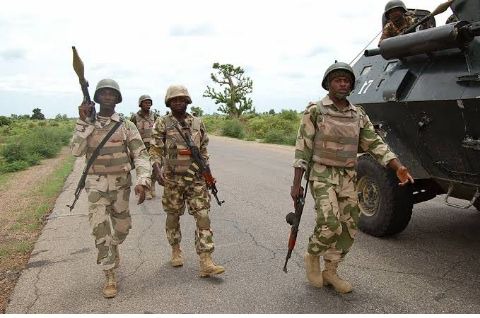 According to a statement that was released by the Army spokesperson, Brig. Gen. Onyema Nwachukwu, he made it known that troops of Sector 5 of Exercise Golden Dawn deployed in Anambra State have neutralised three unknown gunmen who recently attacked a police checkpoint along Okija-Onitsha Expressway.

Speaking further, he revealed that the they recovered one vehicle and two motorcycles from them, while conducting further exploitation of the general areas for the fleeing terrorists. He further stated that a police officer was killed during the gun battle.

I think this is really a good and a cheering news. We really need to encourage the operatives of the Nigerian army so that they will be able to deal with these killers and terrorists who have continued to kill and terrorise the people of the south east region.

What is your take on this? You can drop your comments and opinions below.