By Pearlove (self media writer) | 2 years ago 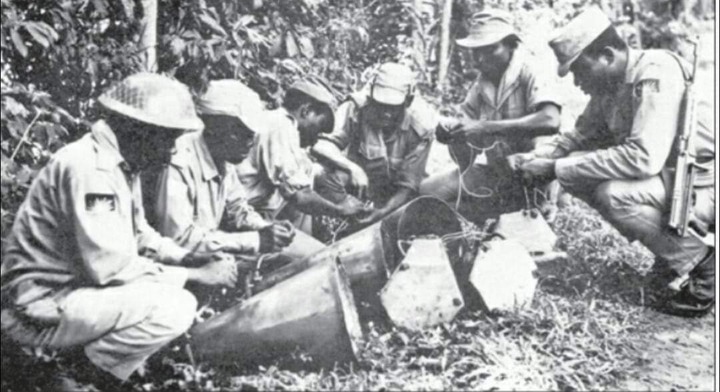 Biafran troops preparing local versions of a primitive, locally built version of a claymore mine that proved enormously successful in the war :particular when deployed in convoy ambushes in the jungle there were rather appropriately called "Ojukwu Buckets"

It was called Ogbunigwe(Mass Killer) by the Biafran soldiers, but was called Ojukwu buckets or Ojukwu bomb by the Nigeria soldiers.

Originally, the name Ogbunigwe had a singular spiritual meaning proceeding the Biafra Civil War of 1967. The name meaning, "a killer in the heaven or the vast sky;" heaven killer, or "to kill in multitudes." This is believed to be why the Igbo scientist named their flagship invention, the flying Ogbunigwe, before disseminating the label to ground ordnance. The first type of Ogbunigwe to be produced and tested in combat was the rocket propelled surface to surface missile. It was originally designed as a surface to air missile to be used in defence against Nigerian MiG-15 fighters marauding the Enugu airport.

Ogbunigwe`s were used to spectacular and devastating effect in the Abagana ambush which wiped out almost the entire Nigerian 2nd Division in 1968.[16] They were also used effectively in knocking out Nigerian Army Saladin and Ferret armoured cars.

A certain Igbo singer was called to perform in the north but when arriving with his instruments everyone including soldiers fled screaming "Ojukwu bomb". I forget the name of the musician but he narrated his experience in one of his songs..

Content created and supplied by: Pearlove (via Opera News )