By KDSGNewsroom (self media writer) | 1 month ago

Remarks by Malam Nasir El-Rufai, Governor of Kaduna State, at the presentation of the Kaduna State Security Incidents Report for the Third Quarter of 2021, held in Sir Kashim Ibrahim House, on Wednesday, 20th October 2021

1. Our Ministry of Internal Security and Home Affairs has just presented its report on security incidents in Kaduna State within the third quarter of 2021. It is a sobering report, reflecting the real agony of our citizens and communities, their pains and losses, and the fears and anxiety that have created considerable distress. The report puts the statistics in context, analyses the pattern of violence and outlines what the Kaduna State Government and the security agencies are doing to contain the situation and relieve the situation in our communities.

2. These figures indicate the continuing severity of the security situation. In our view, this compels an obligation to transparency on the part of the managers of security. It acknowledges the pain of our people, reflects precise figures on the nature and pattern of security incidents and provides the public factual information on this unprecedented challenge.

3. Previous annual and quarterly security reports have placed the Kaduna Central Senatorial District as the most impacted by these incidents. That was the consistent pattern in the Security Incidents Reports for 2020, the first quarter of 2021 and the second quarter of 2021.

4. However, the report for the third quarter of 2021 indicates that the Kaduna South Senatorial District had the highest casualties in the period. This reflects the toxic mix of banditry and the continuing violent clashes between communities in Zangon-Kataf, Kaura and Kauru LGAs. The locus of these violent incidents is Zangon-Kataf LGA where the peace process, championed so impressively since last year by His Highness the Agwatyap, is being imperilled by sundry acts of lawlessness. I call on all the communities in Zangon Kataf LGA to recommit to peace, to work together to promote harmony, uphold the rule of law and unite to against the criminals that threaten all of them.

5. While receiving the second quarter report in July 2021, I had noted that “it is a matter of profound regret for me that our considerable investments in security are yet to manifest in the defeat or at least the considerable degradation of the criminals that menace our people. We have consistently supported the federal security agencies deployed to our state with logistics and equipment. Apart from these recurrent expenses, the Kaduna State Government has undertaken capital expenditure to provide facilities that can multiply the capacity of security agencies to deter crime and conduct effective investigations of those that do occur. We created the Ministry of Internal Security and Home Affairs to provide a specialised institution to coordinate these investments and our liaison with the federal security agencies”.

6. I am happy to report that since I made those comments, the military and other security agencies have commenced operations against the bandits. These operations, which began in the third quarter, are degrading bandits but they are not yet simultaneous across all the affected states in the North-West region. This reflects the limitations that personnel and other resource deficits have imposed on the federal security agencies. There are simply not enough boots on the ground to have credible deployments in most places to protect communities, deter crime and enforce law and order.

7. Many state governments in the North-West and the North-Central have adopted an unconventional approach to help the federal security agencies to better protect our communities. There is no alternative to launching simultaneous operations.

8. I call for a consensus between the Federal Government and the the 36 states on an emergency programme of recruitment into the security agencies. Government can change the game significantly by hiring 1,000 willing youths from each of the 774 LGAs in the country into the security agencies. This will be a surge in numbers that is unprecedented since the civil war. An influx of 774,000 new boots on the ground will be a significant blow against criminals and an employment boost.

9. I wish to appeal to all the citizens and residents of Kaduna State to remain law abiding and to uphold peace in their communities as best as they can. On behalf of the state government, I offer our sympathy for all the pains and sorrow insecurity is causing despite our sincere and consistent efforts and investments of hard-earned resources. I assure you that we are working hard to solve this problem and it is our solemn duty to do so. We offer our condolences to the security agencies and the families of the security officers that have been killed while trying to keep our people safe.

10. On a final note, I will like to thank the honorable Member for Zangon/Jaba for commending the conduct of the Local Government elections. I want to thank all the security agencies for the role that they played in making this happen. I will also like to announce that this Saturday, the two Local Governments of Birnin Gwari and Zangon Kataf will be having their own Local Government elections. They were postponed for security reasons, but I believe that the security agencies and the State Independent Electoral Commission have agreed that it is possible to hold this election this weekend. Our hope is that we will be able to conduct this election as well as bye elections in two or three Local Governments, so that we swear in the new Local Government Chairmen, to start their tenure from the 1st of November 2021.

11. I would like to observe that if elections do not take place as scheduled on this date, we will have no option than to appoint Administrators to manage these Local Governments for the next three years. So it is in the interest of everybody to allow elections to take place, otherwise I will appoint people to manage those local governments.

12. I will also want to comment on those that are affected by insecurity. We have a Riot Damage and Compensation Fund for those who are affected from 2016. I am therefore directing the Ministry of Internal Security and Home Affairs to draw from the Riot Damage Fund, to pay all those affected, up to, and including this year.

13. I would also like to inform the security agencies as well as the traditional leaders here, that we are in the process of establishing a Farmers/Herdsmen Reconciliation Council at the State level as well as similar Committees at the Local Government and Chiefdom and Emirate levels. This is backed by a law, a military edict, enacted in the 1990s. But somehow, we didn’t come across the law until recently. So, we are activating these Committees to help in managing clashes between farmers and herdsmen at all levels.

14. We in the Kaduna State Government, have always aligned with the declaration of bandits as insurgents and terrorists. We have written letters to the Federal Government since 2017, asking for this declaration because it is the declaration that will allow the Nigerian military to attack and kill these bandits without any major consequences in international law. So, we support the resolution by the National Assembly and we are going to follow up with a letter of support, for the Federal Government to declare these bandits and insurgents as terrorists, so that they will be fair game for our military. This is the view of the Kaduna State Government.

15. Let me conclude by expressing our deepest gratitude once again to our traditional leaders. You are playing a very important role not only in the provision of useful intelligence in your communities, but in also in engaging in reconciliation. You are also engaged in peace-building in collaboration with our state Peace Commission. We urge you to continue and I particularly urge the Agwatyap not to be discouraged by what is happening, to continue to work towards peace. In the end, there is no alternative to peace building. As leaders, we cannot but to continue to preach peace.

16. I want to express our gratitude to our security agencies for the sacrifice that they are making. I urge them not to be discouraged by comments by those who are uninformed, who think that nothing is being done. My colleagues, the politicians, are the most guilty; just because they want people to clap for them, they will say that nothing is being done. If nothing is being done, you will not be able to sleep. Many of these incidences are being prevented and when they are, you will not hear about it. You don’t hear commendation but when something happens, you hear all the condemnation. As someone who receives the security reports on a daily basis, I know that a lot is being done by the security agencies. I wish to commend you and may God bless you. We are happy with the results of the military campaigns, and it is clear that kidnapping has gone down, but we want more than that. We want to have zero-kidnappings, zero killings. 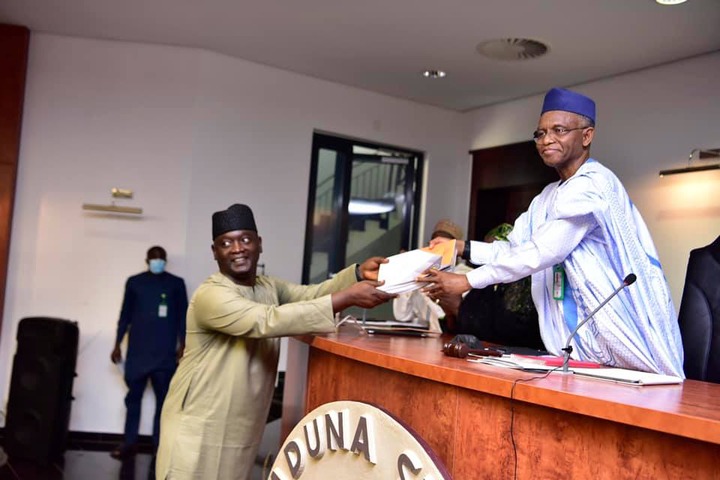 Content created and supplied by: KDSGNewsroom (via Opera News )