Echoes Of Civil War: What Nigerians Should Know About Immediate Causes of The Nigerian/Biafran War

By Timtrendz (self meida writer) | 19 days

It's said that those who don't learn from history are abound to repeat it. Is Nigeria about to repeat the mistakes that led to the civil war between 1967 and 1970?

As echoes of the Civil War are heard due to rising state of insecurity in Nigeria, there is the need for Nigerians, especially, those who weren't born during the Nigerian/Biafran war to know and those who were alive then to be reminded of what led to the war.

Prominent figures and politicians have continued to warn about consequences of possible civil war in Nigeria and also calling for strategic measures toward addressing the rising insecurity in the country.

Recently Vice President Yemi Osinbajo said that Nigeria could not afford another civil war because it would not augur well for the country. He made the statement at an interactive forum of All Progressives Congress (APC) Anambra governorship aspirants, organised by the state chapter of APC Patriots in Abuja.

Joining the fray, is a popular musician, Reekado Banks. He expressed his fears via his official twitter handle that politicians might be fueling the existing divides.

“Nigeria is on the brink of a civil war & the politicians are doing everything to enable it because their schemes thrive in havoc & when there’s a divide,” the singer tweeted on Monday.

“As citizens, who will suffer the most from this impending disaster, we must do everything within our power to champion peace." he concluded. 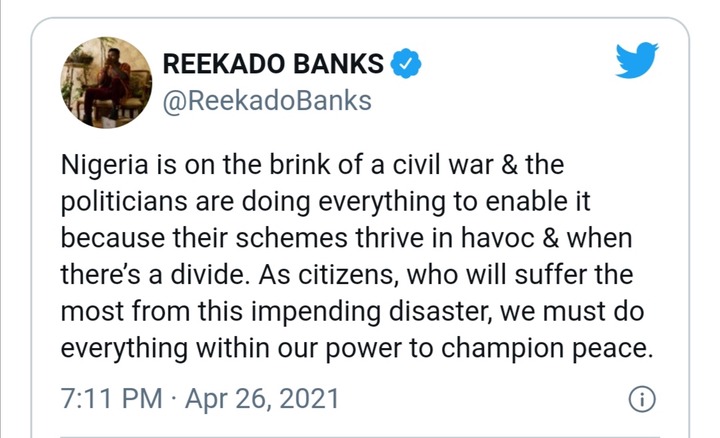 Reekado’s comment is coming after Wole Soyinka, Nigeria’s literary icon, joined other public figures to warn about an imminent deterioration in the country’s security crisis which might fuel the cause for another civil war in Nigeria.

The novelist also asked the federal government to seek foreign aid in tackling insecurity in the country.

What caused the first Nigerian Civil war and what lesson can we learn from it?

The first Civil War is the worst thing that ever happened to Nigeria since independence in 1960. Nobody prays for it to happen again.

The Civil War which some people call the Biafran War or the Nigerian-Biafran War, was a civil war that was fought between the government of Nigeria headed by General Yakubu Gowon and the secessionist state of Biafra led by Lt. Colonel Odumegwu Ojukwu. The war broke out on 6th of July 1967 and lasted until 15th of January 1970. 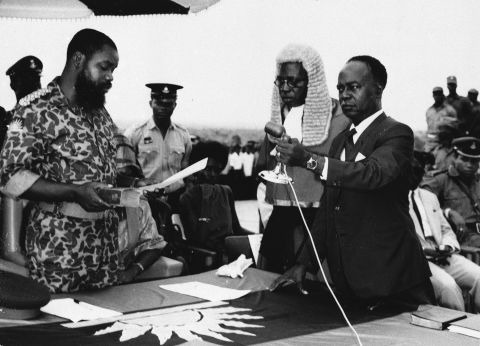 Ojukwu declaring the Republic of Biafra

The war started when Biafra which represented nationalist aspirations of the Igbo people was declared a sovereign state by Ojukwu. leadership of the Igbo people, as at then, felt they could no longer coexist with the Northern-dominated federal government, hence the declaration of their own country.

The conflict was of political, economic, ethnic, cultural and religious tensions which existed before Britain formally decolonized Nigeria between 1960 and 1963.

There were many remote and immediate factors responsible for the war. Some of the immediate causes of the war according to Wikipedia included ethno-religious violence and anti-Igbo pogroms in Northern Nigeria. Another factor was the military coup, and counter-coup of 1967.

Further is the persecution of Igbo living in Northern Nigeria. It was also fueled by struggle for control over the lucrative oil production in the Niger Delta.

Since the civil war Nigeria has never been so divided and torn apart as it stands today. It is not only Igbos that are agitating for secession today, the Yoruba from South West are also calling for the Republic of Oduduwa.

President Buhari must act fast and do the needful in order to avoid another civil war which might lead to the end of the country. What do you think president Buhari should do now? Your views are welcome.

50 Ankara Gowns Every Married Woman Might Want To Try

Photos: Classy Long Lace Gowns That You Should Try Our For Your Next Owanbe Party