You still remember the late Iran General Suilemani that was blown out by an American drone on his way back from the Airport? Now take a look at some crazy stuff about the drone that was used on him.

"The MQ-9 Reaper" is currently regarded as the world most expensive, deadly and fared drone owned only by USA. and it is believe to course about $64 million dollars which is roughly 24 billion, eight hundred million naira. The deadly MQ-9 Reaper, or ‘Predator B’ drone has only one objective — to find, fix and finish its targets. One of the deadliest drones in US’ arsenal is used against ‘ speedy execution of any target because it never miss.. On January 2, it assassinated Iran’s military general, Qassem Soleimani. The MQ-9 Reaper drone is regarded as one of the deadliest drone ever made by mankind in the world,Not just because of its speed and firepower, but also because of its stealth and the level of damages it does. The best characteristic of the MQ-Reaper, like all other drones, is that it doesn’t need a human pilot. This means if there’s a chance that a mission could go wrong, no human lives will be put at risk. In fact, operators can be as far as 1,850 kilometres from the drone and still perform manoeuvres. That distance is almost the same as the north to south width of Russia. The 4,900-pound drone can also conduct surveillance, assist in search and rescue missions and allow US forces to “conduct irregular warfare operations,” according to the Air Force, which proposed the system in hopes of ramping up military operations overseas. 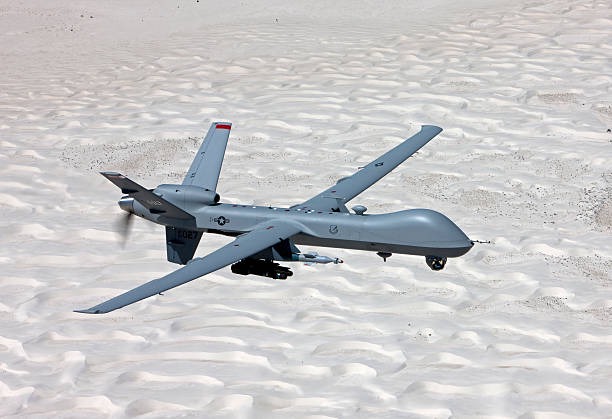 During the 2019 Aviation Nation airshow, the MQ-9 Reaper drone was out of place among the other ear-splitting aircraft. It silently flew by for a single demo,  sending shivers down viewers’ spines, as its Honeywell TPE331-10 turboprop engine barely made a peep.

The MQ-9 Reaper drone can go as fast as 482 kilometres per hour (kph), but it has a cruising speed of 370 kph. While that may be slower than some other drones in the market — like the Northrop Grumman RQ-4 Global Hawk that can hit 629 kph — it’s one of the marginal compromises made in exchange for stealth. The US Air Force drone is equipped with a Multi-Spectral Targeting System (MSTS). That means even before the target is within the drone’s line of sight, there are already numerous visual sensors locking on. This includes an infrared sensor, colour daylight TV camera, image intensified TV camera, laser range finder and laser illuminator. Content created and supplied by: Freelance001 (via Opera News )