By TheDailyNewsNg (self meida writer) | 10 days 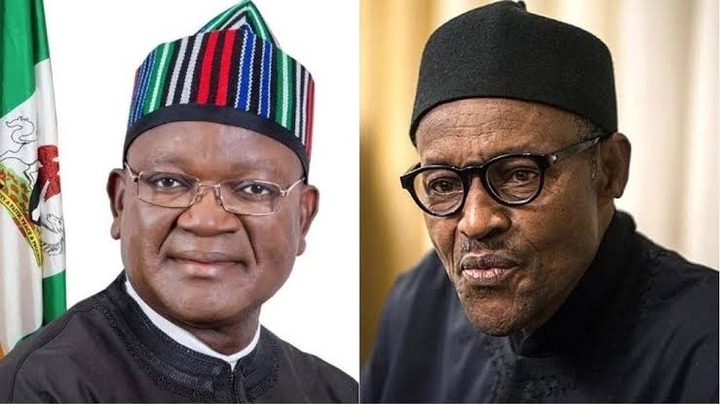 The governor of Benue state, Samuel Ortom has called on the President of Nigeria, President Muhammadu Buhari to act fast towards the killings going on Nigeria stating that over 70 persons have been killed due to attacks on different part of the state.

The governor who said the attacks where becoming too much and the silence of the presidency was disturbing called on the President to do something as the patience of the people of Benue state have been over overstretched.

Ortom went ahead to insist that it was pertinent the president address the nation by himself this time around and stop sending his media aide Garba Shehu. He said Buhari’s body language has betrayed him that he is president of the Fulani instead the entirety of Nigerians.

Ortom who sometime last year had suggested the approval or the licensing of AK47 for citizens for self defense as a solution to herdsmen crisis and the growing insurgency attacks have again reiterated his call for the licensing of firearms.

"These persons left their villages and homes for refuge, due to several attacks on their communities. They are now refugees. You still came here and killed them. Over 70 persons have been killed within the last two weeks.

... What kind of a thing is this? What kind of a country are we in? Mr. President said the other that anyone with AK47 should be shut, but up till today we've not heard anywhere that herdsmen with AK47 was shut by security men. Where are we going from here?

You wake up every morning and you see your people being killed, how can I be a happy man with this kind of a thing? How can I be a happy man? So please, Mr. President must do the needful, and I want to suggest, that immediately let there be a security summit. I am aware that in Niger, Zamfara, all over the country, North East, North West, North Central, South East, South South, South West, all over the country, this kind of barbaric act is being carried out by the same Fulanis and people are afraid to say it. And they give them the name bandits, they are not bandits they are Fulanis. This ones that came here were speaking that language saying that I must proscribe the open grazing law. That will not happen because it was the generality of Benue people who made the law not me.

... This is sad, my heart bleeds and President Buhari must arise to his responsibilities as the Commander-in-Chief of the arm forces. If he doesn't do it, our people say that the goat doesn't bite, but if you push it to the wall, it will bite. This is not accepted, this is not right. President Buhari was elected by the people he must arise and do something. Or else he has the responsibility of arming the security men and ensure we have peace in Nigeria.

This is too sad, Buhari can not be playing us around because these are Fulani men doing the same thing. Buhari if you were the governor of Benue state, what do u want me to say? You must arise and do something. They are your kinsmen, call them and say enough is enough. This is taking us for granted too far and this will not be accepted.

I know the implications of telling people to go on self help and if you are serious with this your security matter. Mr. President, allow us to buy AK47 and face these people, give us license so that we too can face them. You have armed your brothers and you have disarmed us.

I saw somewhere where securitymen arrested people with Cutlasses, sword etc because they are from Benue state, what about the Fulani men, you know where they are. We are not asking you to protect us because we want Favour from you. It is your responsibility. You can't continue to ask your aides to speak on security matter, it is wrong. You must stand up and address the nation and declare a state of emergency. Call a security summit and let us agree and you must be sincere this time. Not just playing on us. This is too far, Enough is enough! If you want to kill us come and kill us. I am ready for death, I am sixty years old. Come and kill us all." He concluded.