By AnointedInk (self media writer) | 10 months ago 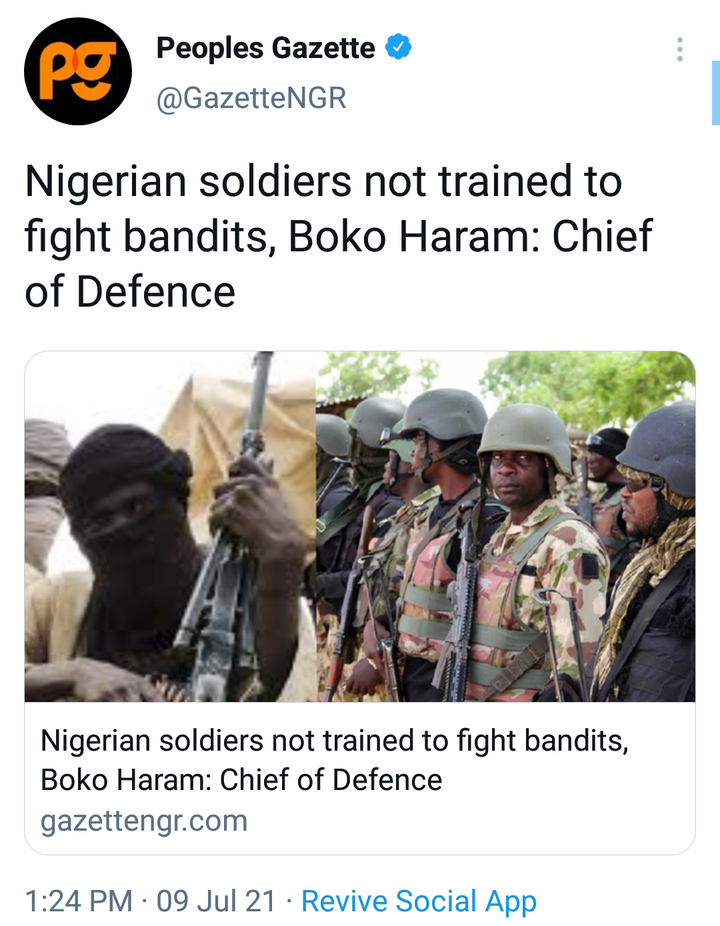 Amid continuing deterioration of worsening insecurity, the Nigerian Army has explained why it is playing catch-up with bandits, Boko Haram, and ISWAP terrorists.

Specifically, the army stated that the federal government did not train its soldiers to fight asymmetric warfare.

The Chief of Defence Staff (CDS), Gen. Lucky Irabor, however, disclosed that the armed forces were developing new capabilities essential in tackling the security challenges across the country.

Mr Irabo stated this Wednesday night at a dinner held in honour of officers of the Senior Course 43 of Command and Staff College Jaji, Kaduna. 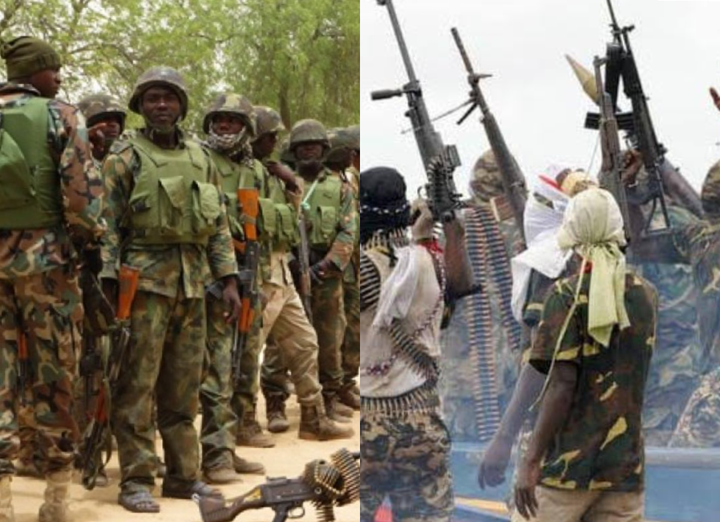 The Chief Of Army Staff, Lt. Gen Farouk Yahaya has promised that wounded Nigerian soldiers that need further treatment abroad to get better will be flown out accordingly.

He made the promise during his visit to wounded officers and soldiers at the 44 Nigerian Army Reference Hospital in Kaduna on Thursday.

Gen. Yahaya also used the opportunity to reiterate the Nigerian Army’s (NA) commitment to giving prompt attention to the medical needs of wounded officers and soldiers.

NSCDC Arrests Man For Inflicting Cutlass Injury On Another In Kwara 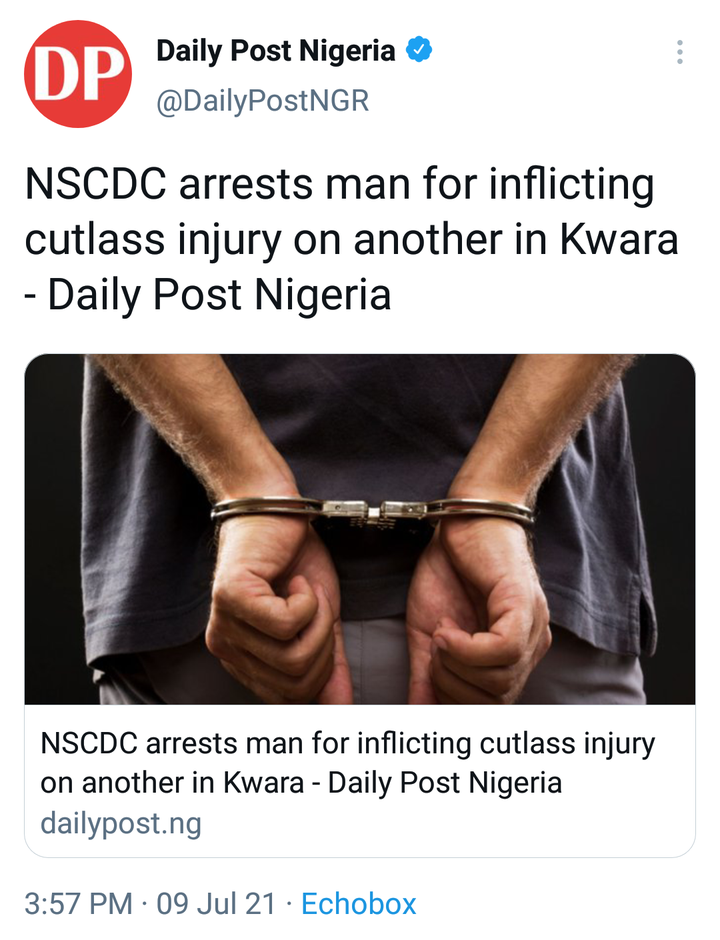 A 20-year-old man, Usman Abubakar, has been arrested by the Nigeria Security and Civil Defence Corps in Kwara State for allegedly attacking a man with a cutlass.

The cutlass attack left a deep cut on the neck of the man identified as Naru.

Spokesman of the NSCDC, Babawale Zaid Afolabi, in a statement in Ilorin on Friday, said the incident occurred on Wednesday at Memunakpetu area of Janba, Gwanara, in Kwara North Senatorial District.

The suspect allegedly used Naru’s cutlass to attack him while they were eating together at the residence of the suspect’s master in Memunakpetu in the early hours of Wednesday. A Non-Governmental Organization (NGO), the Ladi Memorial Foundation (LMF) has revealed plans to train and equipped over 100 students in the Federal Capital Territory (FCT) Abuja with entrepreneurial skills for employability.

Speaking at the launching of the initiative at Government Secondary School (GSS) Pyakasa, Lugbe in Abuja at the weekend, the Executive Director of the Foundation, Mrs Rosemary Osikoya said the Organization was targeting 31 students from the first batch of the project.

LMF in collaboration with Chateko Vocational Institute (CVI) is to train and equip youths with vocational and technical skills for improved livelihoods and productivity toward reducing poverty and unemployment in Nigeria. 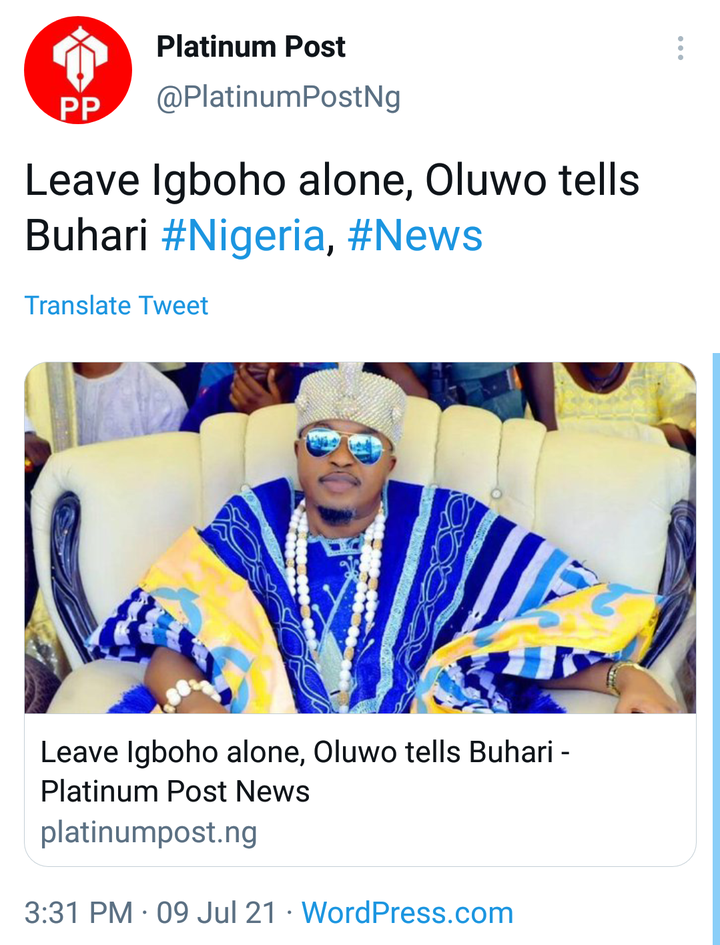 Oluwo of Iwo, Oba Abdulrasheed Akanbi has pleaded with President Muhammadu Buhari to prevail on security operatives to leave the popular Yoruba freedom fighter, Sunday Adeyemo aka Igboho alone, saying he has learnt his lessons.

The monarch in a letter to President Muhammadu Buhari made available by his spokesperson, Alli Ibrahim on Friday, disclosed that the tactics and approach of Adeyemo, popularly called Igboho, has been chastised by royal father’s in the region but sought the president’s magnanimity to let him off the hook in the interest of the nation’s unity, especially having been ready to step down his agitation.

He added that hunting down Igboho could lead to suspicion and distrust in the country similar to the situation witnessed after the deaths of Chief Moshood Abiola and Ken Saro Wiwa.