By Mediateehem (self meida writer) | 19 days 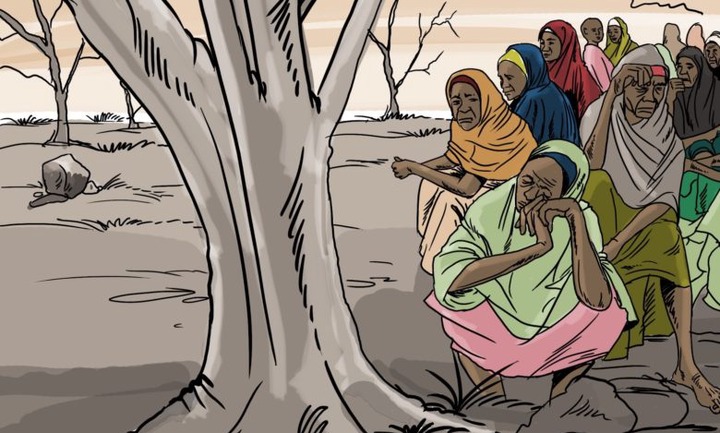 According to a news that was posted by Hum Angle, it has been alleged that a 20 year old woman, who escaped from Boko Haram's captivity is now lamenting to go back to meet her Boko Haram husband there.

According to what Aminata said in an interview with Hum Angle, she revealed it that she was taken into captivity in 2015 when she was still 14 years of age, along with other seven women and also escaped from their camp three months after in 2015, as she was tired of living there and she revealed that she escaped because she was also worried about her mom who will be concerned about her wellbeing.

However, after living for five years in Internally Displaced Persons camp in Maiduguri, Aminata is claiming that she feels like retuning back to her old life while she was still in captivity, as she alleged that she is suffering in the camp. She said while she was in captivity, she was married off to a Boko Haram commander who took very good care of her, as she doesn't need to work for anything before she eats, as she alleged that she also got pregnant for him and she's presently with the child.

Aminata said she didn't know her Boko Haram husband but, she was lucky to have ended up in his hands because, he satisfies her in everything, except any day they go for attack and they don't come back victorious. Aminata said the name of her husband was Abubakar and that, they wake up together every morning and pray and she will prepare their food and do house chores, then the both of them come back to each other to revise what they were taught the previous day at Qur'anic School.

She said when she became so worried about her mother, she decided to escape from the camp and that the day they left, she along with others that planned it woke up at 4am and embarked on their journey and while they were halfway, they saw insurgents coming on their motorcycles and looking for them, as they hid under leaves until they passed away.

She said they went through Gudu so that they won't be caught and when they got to Bama, she started looking for her mother, as she later found her at Dalori IDP, where her mother, her brother and her sisters also live after their community was attacked by insurgents and that since she has been living in the IDP camp since 2015, feeding has been very difficult for her because, they only give N17,000 worth of food ticket for just one person in a household, as other members of the family will have to source other means to eat.

She said she makes traditional caps before she fends for herself and her male child and that, making the cap is time consuming and she only makes like N4,000 to N6,000 every month.

Aminata claimed that eating is her biggest challenge and that, six of them depend on the meal ticket they do give her mom every month, as she alleged that she wants to return back to Boko Haram camp if possible for her, where she will not struggle before she eats.

Skirts And Blouses Ideas For Your Pleasure Today