On Wednesday, Governor El-Rufai of Kaduna State explained the need why Federal Government should declare bandits as terrorists, and revealed a vital step he took in 2017. According to him, tagging them terrorists would allow the military to kill and deal with them within international law without any major consequences. 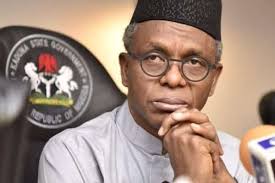 He affirmed the fact that his administration is always aligned with the declaration of bandits as insurgents and terrorists. The Governor who felt disturbed about the quarterly security reports he received said two local governments in the state are under serious security threats of bandits.

He further revealed that the just concluded state congress of the All Progressive Congress, APC couldn't be held as a result of these criminal elements.

And that he was considering putting administrators in the two affected local governments for the next three years if the elections couldn't be conducted without security.

The Governor's calls on FG to declare bandits as terrorists were coming days after the Senate had asked President Buhari to, as a matter of urgency to do the same and waged a total war against them.

They had also requested that FG order the military to eliminate by bombing their hideouts, immediately declare all known leadership of the bandits wanted and track them wherever they are for arrest and prosecution.

These were the resolutions reached after the lawmakers had deliberated on a motion on the activities of bandits in Sokoto State. Here is what El-rufai said he had done since 2017 on bandits:

He claimed to have written letters since 2017 asking FG to tag bandits as terrorists. 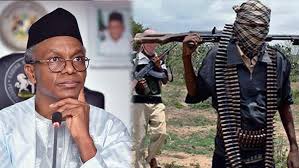 It is important to state that Governor El-rufai had been on this struggle for years of making sure that FG sees the reason why the criminal elements should be tagged as insurgents just like Boko Haram in the North East.

He explains how he has been writing letters to FG since 2017 on the need to officially make a declaration on the bandits. This is contained in a report published by the Vanguard.

El-rufai is quoted to have said: "We have written letters to the Federal Government since 2017, asking for this declaration because it is the declaration that will allow the Nigerian military to attack and kill these bandits without any major consequences in international law.”