How 18 assorted guns, 567 high capacity bullets, others were recovered from 3 men inside vehicles

Eighteen assorted guns including what the police called triple-barrel guns were recovered alongside 567 high-calibre bullets and 16 gun magazines from some hoodlums who kept the arms and ammunition inside vehicles, the Niger State Police Command announced on Friday, October 8.

Three young men were arrested by the operatives of the state police command during the stop-and-search conducted on two occasions on the highways in the state, leading to the discovery of the weapons and bullets. While two of the men, whose names were given as Muhammadu Bello, aged 32 years and Nura Umar, aged 30 years, were found with two AK-47 rifles, two AK-49 rifles, 417 bullets of 7.62 calibre and 150 (RPG bullets, totalling 567 bullets, alongside 16 magazines, the other person, Habib Sani, aged 25 years, was found with 14 locally-fabricated guns.

The guns said to have been recovered from Sani comprised six double-barrel guns and eight triple-barrel guns concealed in a sack inside a commercial vehicle in one of the highways in the state.

According to reports, in the first incident, both Bello and Umar were arrested by operatives of the Police Saferhighway Patrol Team who intercepted a Honda Accord during a stop-and-search duty they embarked upon.

It was gathered that Umar, who drove the car, refused to stop when he was flagged down, causing the policemen to pursue the vehicle. On seeing that the policemen were after their vehicle, they stopped the car and made an attempt to flee, but they were promptly arrested by the policemen. 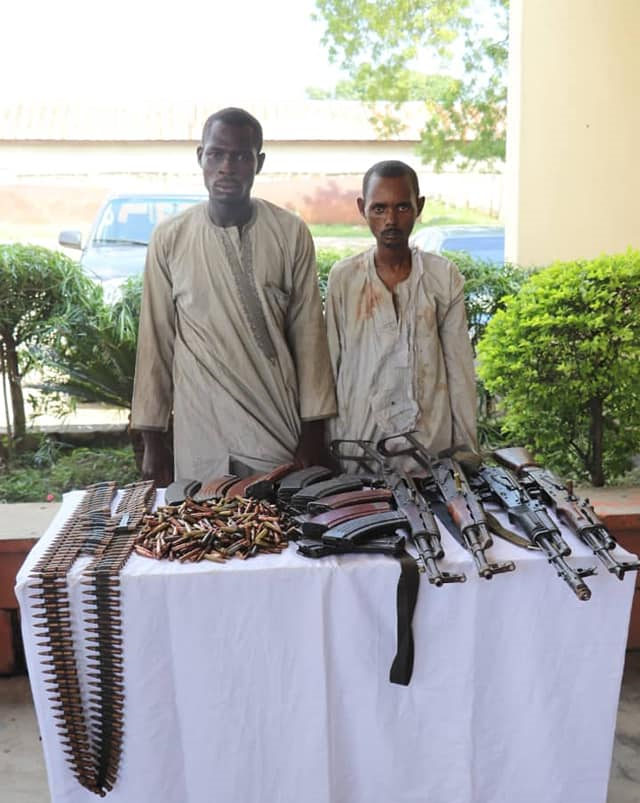 During interrogation, they were said to have confessed to the crime, saying that they were taking the weapons and bullets from Sokoto to a buyer at Mokwa in Niger State. It was gathered that the guns were concealed in a sack and hidden inside a commercial vehicle which he boarded and when he was arrested, he disclosed that he was asked to deliver the guns to a buyer with a promise of N1,000 commission on each of the 14 guns.

According to the state police command, the three men are still under investigation and they will be prosecuted at the completion of the investigation.