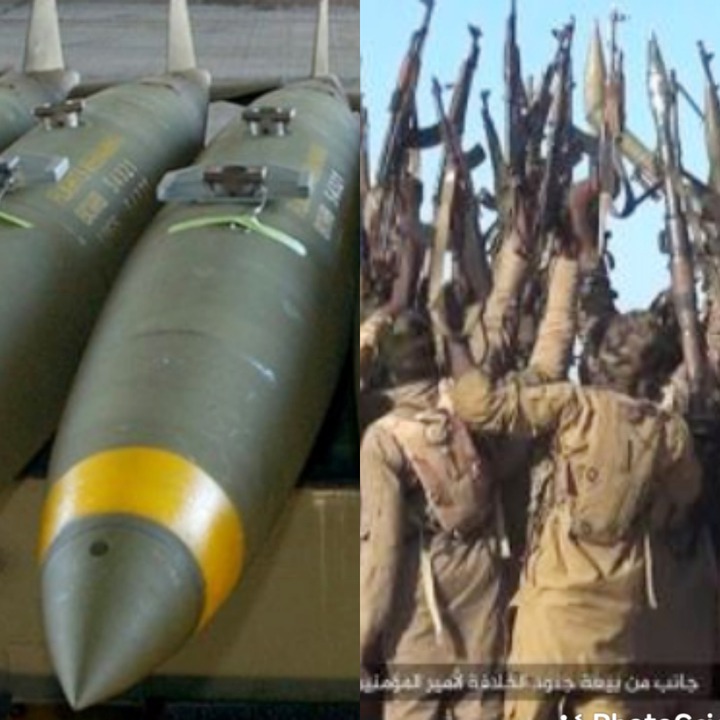 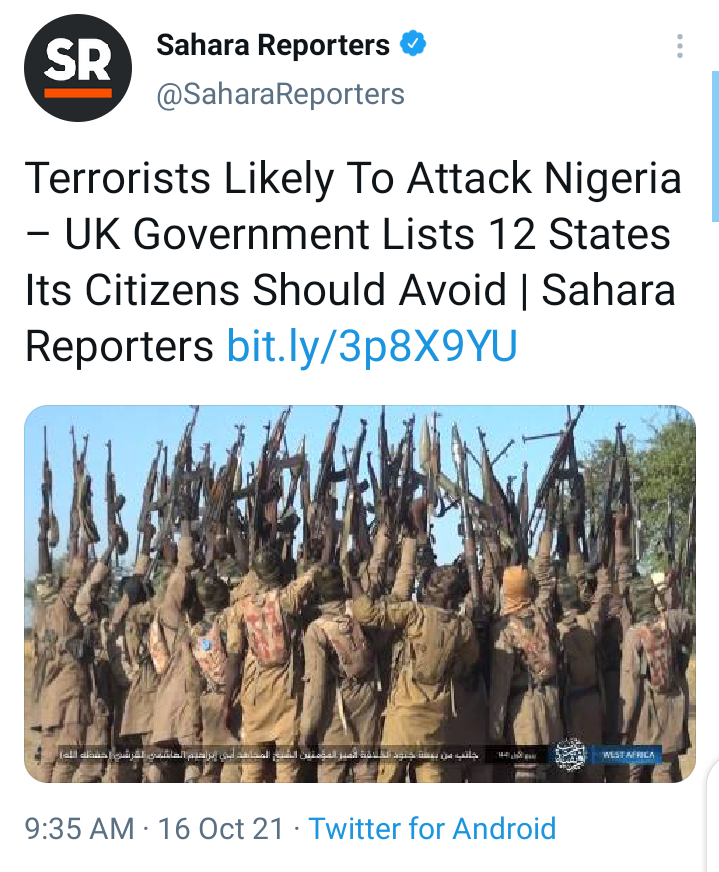 The United Kingdom government in Nigeria has said terrorists are likely to carry out more attacks in Nigeria, while listing out more than 12 states which its citizens in Nigeria should avoid or be prepared for a high risk of kidnapping and other crimes.

In a statement published on its website on Friday, the government also urged its citizens to monitor the local media for information on possible protests in different parts of the country.

Terrorists are very likely to try to carry out attacks in Nigeria. Most attacks are conducted by Boko Haram or Islamic State West Africa (ISWA) and occur in Borno, Yobe and Adamawa States in the North East,” the UK government said.

The statement further reads, “Events to mark the one year anniversary of #EndSARS protests are likely to take place nationally, week commencing 18 October.

“There may be protests and a heightened security presence in major cities such as Lagos and Abuja. In parallel, the high profile trial date of a separatist leader is also scheduled for 21 October in Abuja.

“There may be additional protests and a heightened security presence in Abuja and in the South-East for this reason. In all areas affected, you should monitor local media, and avoid any demonstrations or large gatherings.

“From 3 September 2021, the Nigerian Commission mandated for all telecommunication operators in Nigeria to stop extending services to Zamfara State.

Army To Detonate Explosives In Calabar 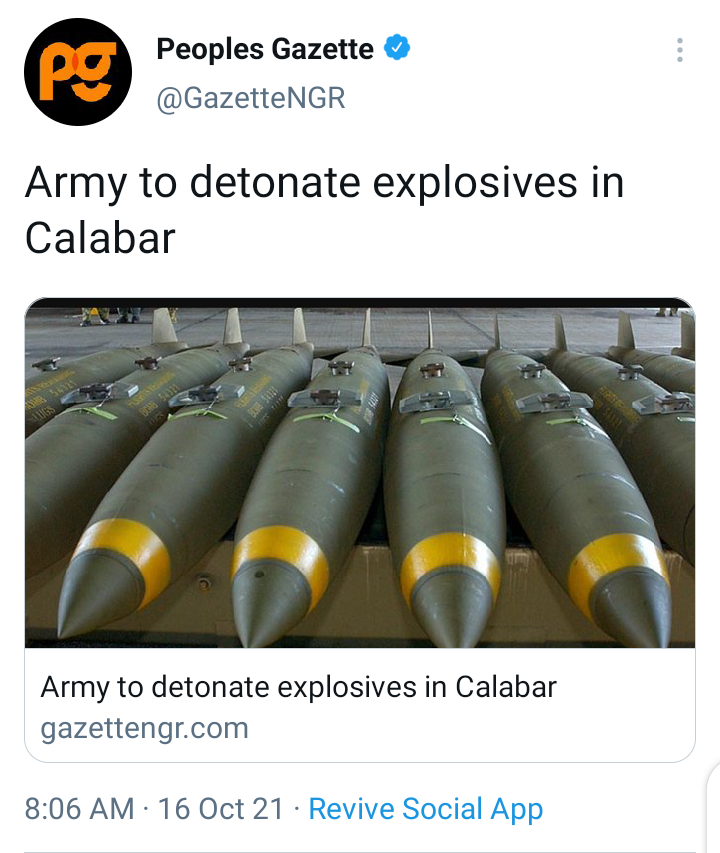 The 13 Brigade Command of the Nigerian Army, Calabar, has announced that it would dispose of expired explosives at the shooting Range in Calabar from October 14 to October 17.

This is contained in a statement on Friday in Calabar by Captain Oluwatope Dorcas-Aluko, Assistant Director, Army Public Relations, 13 Brigade, Calabar.

“The exercise is a routine military exercise aimed to detonate expired explosives. 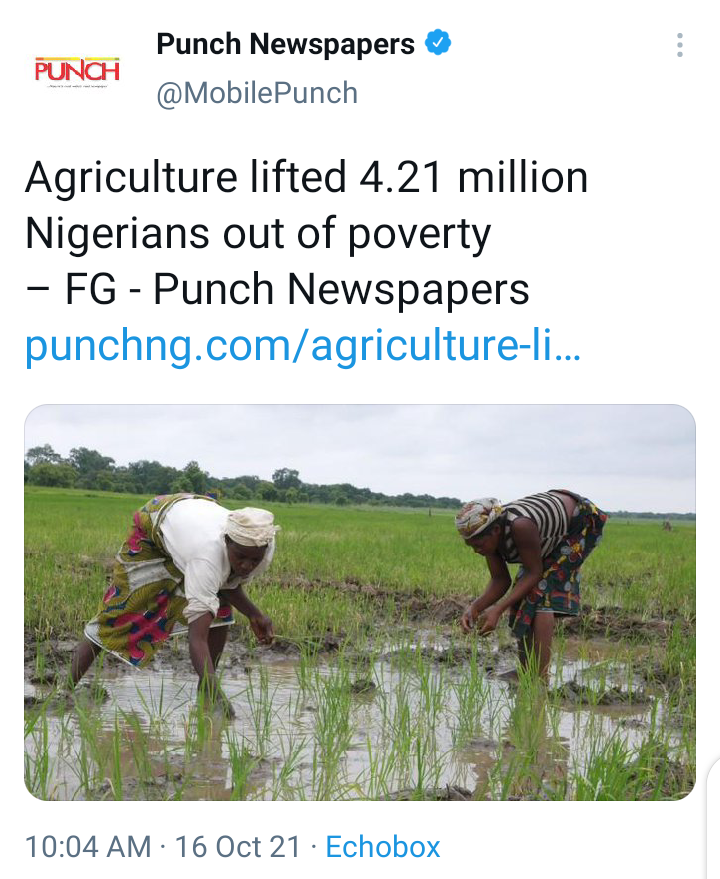 The Federal Government has said about 4.21 million Nigerians were lifted out of poverty through the agricultural sector in the past two years.

The Minister of Agriculture and Rural Development, Mohammad Mahmood, said this on Friday at a ministerial press briefing in celebration of the 2021 World Food Day in Abuja.

He said, “Through our various empowerment initiatives along production, processing and marketing of agricultural commodities, we have lifted a total of 4,205,576 Nigerians out of poverty in the last two years.

“This is going to continue as part of Mr President’s promise to lift 100 million Nigerians out of poverty within the next 10 years.”

Mahmood said in the area of capacity building, a total of 2,205,576 farmers, comprising youths and women, were trained and empowered on different agricultural value chains.

He said through the National Accelerated Fish Production Programme, a total of 783,102 metric tonnes of fish were cultivated via the exploration of marine resources in Deep Sea/Exclusive Economic Zone and the exploration of inland water bodies by fish farmers and fishermen. 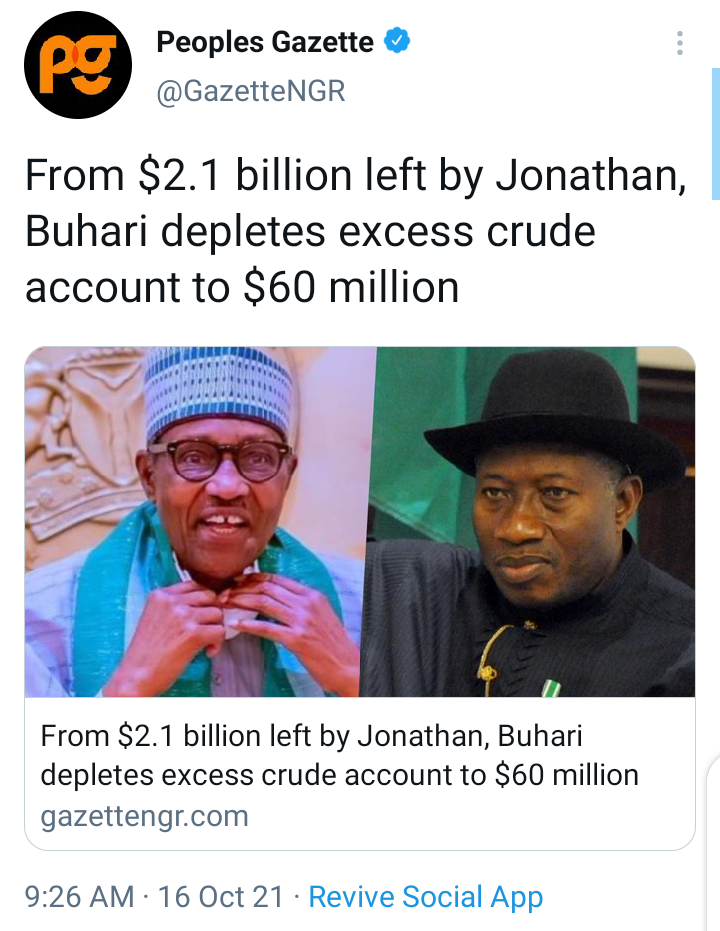 President Muhammadu Buhari’s regime has announced that Nigeria’s Excess Crude Account (ECA) balance as of October stands at $60, 857,773.43, a drastic depletion from the $2.1 billion left by Goodluck Jonathan’s administration.

Clem Agba, the minister of state for budget and national planning gave the update during the national economic council meeting at the State House in Abuja on Friday, according to a statement by Laolu Akande, spokesperson to Vice-President Yemi Osinbajo.

The ECA, created in 2004 by former President Olusegun Obasanjo for the sole aim of saving oil revenue in excess of the budgeted benchmark, stood at $3.6 billion in February 2014, one of the highest balances on record.