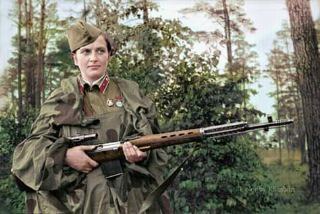 İn early 1941, Lyudmila Pavlichenko was studying history at Kiev University, but within a year, she had become one of the best snipers of all time, credited with 309 confirmed kills, 36 of which were German sniper. 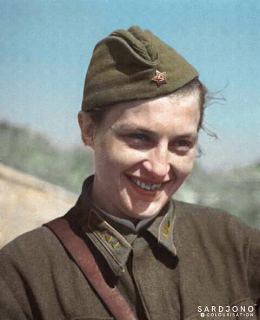 Pavlichenko was born in 1916 in a small town in Ukraine, she was described as an independent, opinionated tomboy who was "unruly in the classroom", as the Smithsonian notes.

At the age of 14, Pavlichenko's family had relocated to Kiev, where she worked as a metal grinder in a munitions factory.

Like many young people in the soviet at that time, Pavlichenko participated in OSOAVİAKhİM, a paramilitary sporting organisation which taught youths weapons skills and etiquette.

On June 22, 1941, Hitler broke ties with Joseph Stalin and German troops poured into the Sovient Union. Pavlichenko rushed to join the Soviet army and defend her homeland, but she was initially denied entry into the army due to gender.

"She looked like a model, with well-manicured nails, fashionable clothes and hairstyle. Pavlichenko told the recruiter that she wanted to carry a rifle and fight. She was later given an " audition" from the Red Army which she was given two Romanian downrange who have been working with the Germans, she gunned them down easily and was enlisted into the 25th Chapayev Rifle Division of the Red Army.

She fought in Greece and Moldova, in little time she distinguished herself as a fearsome sniper after killing 187 Germans in her first 75 days at war. After making a name for herself at Odessa and Moldova, Pavlichenko was moved to Crimea to fight in the battle of Sevastopol. 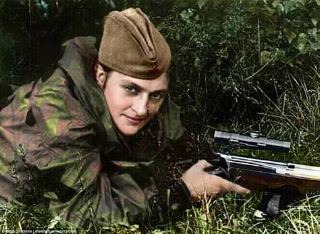 Her reputation earned her more dangerous assignments, eventually facing off one on one with enemy snipers. She was reported to have killed 36 enemy snipers, some of whom were high decorated themselves. She spent eight month fighting at Stevastopol where she earned praise from the Red Army and promotion, on several occasion she was wounded and was removed from battle after taking shrapnel to the face when her position was bombed by Germans.

She became well known as a figure in the war to the extent that the Germans went so far as to address her over loudspeakers, offering her comfort and candy should she defect and join their rank.

Pavlinchenko became a sniper instructor and was soon invited to the White House. She became the first Soviet soldier to visit the white house, Pavlichenko was one of the 2,000 female snipers who fought for the Red Army in World war two and one of the 500 who survived.

Her score of 309 likely place her within the place of top 5 snipers of all time , but her kills are are more numerous, she went back to University of Kiev to finish her Master's degree. İn April this year she was immortalized in a film called "Battle for Sevastopol" in Russia and "İndestructible" in Russia and remains a common hero to both parties.

Content created and supplied by: Richbase10 (via Opera News )