By Ewriter (self meida writer) | 1 months

The soldier, who is assigned to the 302 Artillery Regiment in Onitsha, Anambra State, issued a warning to residents of the area, claiming that their commander had ordered them to relocate.

Residents of Orlu town in Imo State have been alerted to either evacuate or be vigilant by a Nigerian Army soldier who has yet to be named, as some personnel has reportedly been issued a shoot-at-sight order in the ongoing fight with Eastern Security Network operatives. 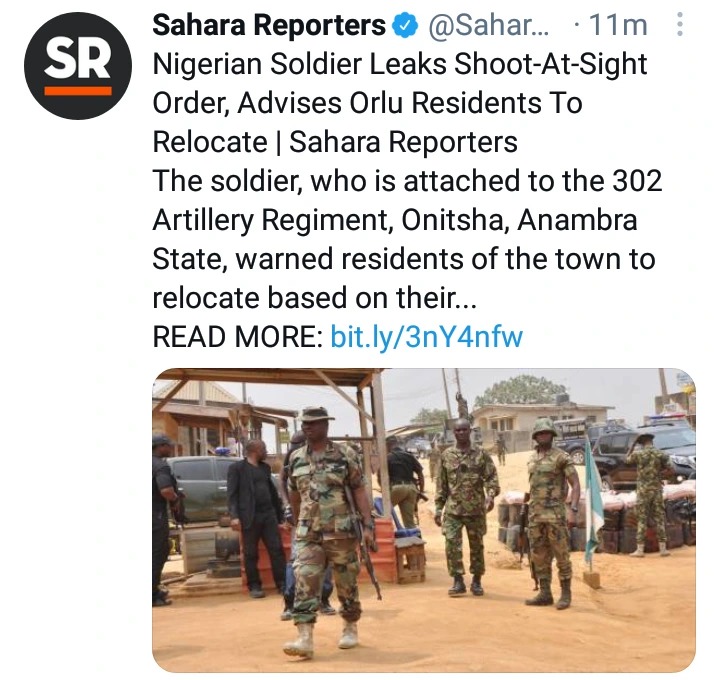 In an audio recording obtained by SaharaReporters, the soldier said that he would not carry out the operation and that as a result, he had been identified by the army commander to be arrested and probably killed.

Orlu has recently become a frontline between the army and ESN operatives, with the military claiming to have killed 11 ESN and IPOB operatives in a gunfight on Friday.

"They first carried us (deployed us) to Maiduguri (Borno State), then 25 of us came back hoping that the matter would be resolved, then they carried us to 302 Artillery, Onitsha, and we were all inside the barracks in Onitsha until 12 pm this afternoon," the soldier said in the audio obtained by SaharaReporters.

"When the fight in Orlu was over, the commander said we should shoot everyone we see."

"I beg you, for the love of God, if your person is in Orlu, try to warn them between now and Monday, and tell them to change their position for the time being. As soon as I left the barracks, the commander said I was going out to expose them and make sure they got me and killed me.

"Take a look at the fabric I'm putting on. I didn't buy these clothes with my own money; rather, I was given these clothes and have retained my uniform.