How The Iron Front Group Oppose The Nazis, SOVIET And British Monarch During The WWII.

The early 1930s were a turbulent time for Europe: the post-World War I economic crisis destroyed the infrastructure of many countries, the European working class grew increasingly dissatisfied with their living conditions, Hitler and his Nazi Party rose to power in Germany and started spreading their militant ideology of terror and ethnic cleansing.

In December of 1931, members of the German Social Democratic Party formed a paramilitary organization known as “the Iron Front.” The organization was initially meant to counter the militant right-wing Harzburg Front, a violent organization founded by the German National Socialist Workers Party. They later expanded their agenda to include fighting communism and monarchism. The founding of the Harzburg Front: camp service of the NSDAP delegation, in the first row Himmler, Röhm and Göring Photo Credit

Although the members of the Iron Front attempted to assume political power in the Weimar Republic peacefully, their efforts produced nothing but violence directed at anti-fascists. Since they failed to counter the right-wing influence by strictly political actions, they resorted to guerilla warfare and started attacking both civilians and military officials with extreme right-wing affiliations.

The Iron Front was responsible for the creation of the Anti-fascist Circle, which nowadays is a common logo used by anti-fascist and extreme left-wing organizations. The logo was created by Sergei Chakotin, a biologist who was the former assistant to the prominent physician Ivan Pavlov. 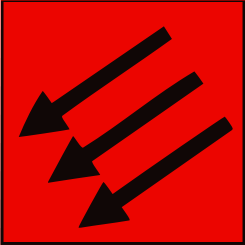 The symbol of the Iron Front without the circle around it Photo Credit.

The Anti-fascist Circle was designed to be easily painted over the Nazi swastikas, and the three arrows within the circle marked the three universal enemies of the Iron Front: monarchists who wanted to restore the Hohenzollern monarchy, Nazis, and other fascist organizations, and Bolsheviks.

Although the Nazi leadership strongly opposed the agenda of the Iron Front and threatened to imprison all people who joined the organization, many German workers and intellectuals joined the Front. They acquired weapons and organized underground channels through which they distributed their anti-fascist propaganda. Sergei Chakhotin’s image of the three arrows as used by the SDP in 1932, opposing monarchism, National Socialism and communism Photo Credit.

In 1932, they started openly fighting Nazis in the streets of Germany and managed to organize mass demonstrations which caught the world’s attention.However, despite their fierce and ruthless struggle against the Nazi regime and its racism, xenophobia, and militarism, the Iron Front was officially banned in 1933. Its members were declared public enemies and were threatened to be shot on sight if they continued their anti-fascist program.