Aguiyi Ironsi And His 194 Days As The Nigerian Head Of State.

By FrankChukwu (self media writer) | 23 days ago

“I ask for soldiers, I am being given politicians dressed in uniform.” - Johnson Thomas Umunnakwe Aguiyi Ironsi (1924 - 1966). 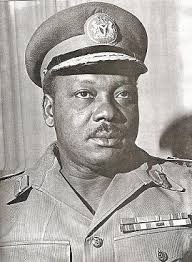 Aguiyi Ironsi was the first Nigerian soldier to be a major General from the rank of private, he joined the Nigerian Army at the age of 18 in 1942 against his sister’s wishes.

As the head of state, he banned the Hausa language as the official language of the Nigerian Military (and civil service examinations in the north), and enforced the English language ( many Hausa infantry soldiers and many civil servants in the northern Nigeria at the time could not speak English).

In his 194 days as the Nigerian military Head of State (the shortest in the history of Nigeria), Aguiyi Ironsi made sure that the freedom of expression and the fundamental human rights of Nigeria citizens were not abused.

He promulgated Decree No.2 which removed the restrictions on press freedoms which the Tafawa Balewa led civilian administration had put in place, and Decree No. 44 which made it an offense to display or pass on pictorial representation, sing songs, play instruments or use words which are likely to provoke any section of the country,” in March 1966.

Ironsi also passed Decree No. 34 which aimed to unify Nigeria into a military state and make the country one single entity for an easy administration in May 1966.