At the Dodan Barracks in 1985, four young majors were detailed to arrest the Head Of State (General Muhammadu Buhari), they were Usman Dangiwa, Lawan Gwadabe, Abdulmumuni Aminu and Sambo Dasuki. They achieved this without much ado. 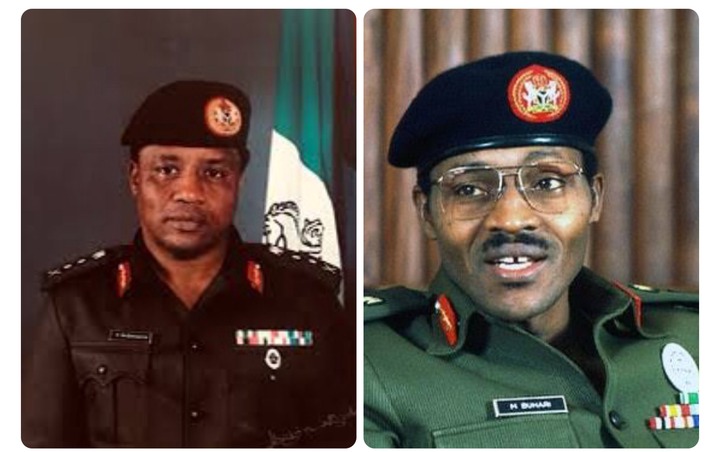 In fact, the Head of State (Muhammadu Buhari) was said to be waiting for them, and accompanied his captors initially to Bonny camp, from where he was later moved (under house arrest) to 1 Hawkesworth Road, Ikoyi. He was there for less than a week before being moved to another house in Benin city.

The deposed Head of State had access to a television that showed only two channels, and members of his family were allowed to visit him only on the authorization of Ibrahim Babangida.

Meanwhile, the official premises of the Head of State in Dodan Barracks was ransacked and Buhari’s belongings were looted by soldiers.

General Ibrahim Babangida, who took over power after Buhari was ousted out of office justified the coup saying that Buhari failed to deal with the country’s economic problems by implementing “Buharism”, and promised to rejuvenate the Nigerian economy, ravaged by decades of government mismanagement and corruption. His regime would go on to survive a coup attempt by his closest friend in 1992.

However, according to a book written by John Paven, titled, Muhammadu Buhari, he opted that the true reason why Ibrahim Babangida overthrew Buhari was that he constantly jailed people on accusations of corruption. In his tenure, around 500 people were jailed and most of them were businessmen who had the resources to undo his government. Paven also opined that Buhari was very secretive in his administrative measures. Most of his actions were kept a secret, even from the Supreme Military Council until he was ready to unveil them.